The draft policy underestimates the number of homeless, unilaterally redefines the idea of shelter, and cuts down on the space provided to the needy 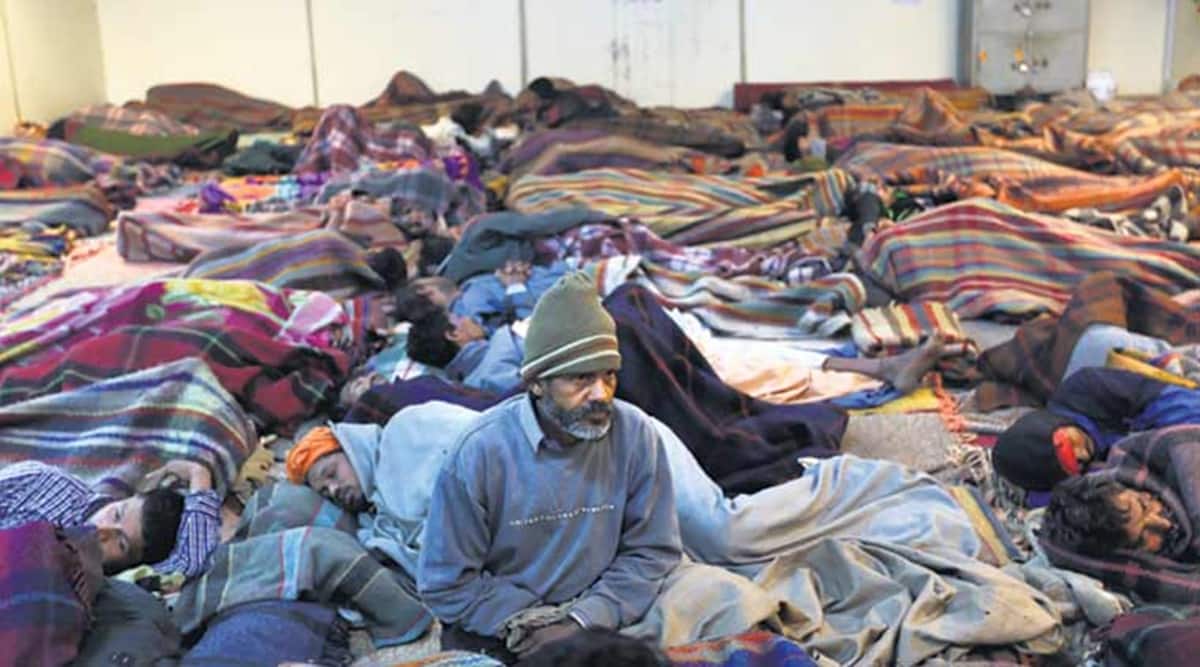 The NHRC has further directed its DG (investigations) to deploy a team of 10 investigating officers on the spot to make an enquiry about all the shelter homes and submit a report within a period of 10 days. (Express Photo: Gajendra Yadav)

The touchstone for any public policy is the inclusion of ideas for the betterment of the most marginalised in society. The draft Master Plan for Delhi 2041, the blueprint for Delhi’s development in the coming 20 years, leaves a lot to be desired from the perspective of the city’s homeless. It has glaring gaps and omissions that may prove to be detrimental for an inclusive Delhi.

Every winter, Delhi witnesses homeless people dying in the streets. The homeless — those without any roofs and sleeping exposed to the elements — suffer from the biting cold and die. Through intervention by the Delhi High Court and many people’s groups, the national capital became the first city in India to have many measures taken to protect the homeless, the most visible and tangible being the homeless shelters. The central government adopted the shelter framework and later transformed it into the National Urban Livelihood Mission — Shelter for Urban Homeless (NULM-SUH). The city now has a robust network of shelters — over 200, the most in any city in India, supporting upwards of 25,000 people in winter. The Delhi Master Plan of 2001-2021, though not implemented well, did give the standard of one shelter per one lakh population for a city — a standard that has now been adopted in other cities and has become the recognised norm. Therefore, it was expected that the Draft Master Plan 2041 would be more progressive and improve upon the existing policies for the homeless. However, the plan fails to do so.

First, the plan fails to understand the scale of the city’s challenge to house the homeless. The official figures as per Census 2011 say that Delhi has 46,724 homeless people in Delhi, a gross underestimate according to organisations and activists working with the homeless groups. Considering the Supreme Court committee recommendations, the figure will be around two lakh, considering the estimated thumb rule of one per cent of the city’s total population is homeless. At best, Delhi can provide shelters to 10 per cent of the homeless population in winter and that too with the existing 200 shelters. Glossing over this fact, the draft proposes no increase in the number of shelters per lakh population, which is only a minimum guideline in the NULM-SUH. The constant tussle between the master plan not having “enough space” will continue if unaddressed and leave many homeless shelter-less.

Second, though the principle of one homeless shelter per 1,00,000 population has been adopted and is appreciated, there is a selective omission of the 50 sq ft/5 sq m standard for every homeless person in the shelters as per NULM-SUH. Each shelter, wherever possible, should be able to accommodate a minimum of a hundred persons. This selective omission of already set standards has led to an inaccurate capacity of shelters to house the homeless in the MPD 2041 draft. A simple calculation will reveal that the proposed 100 sq m plot area with an FSI of 2, resulting in a 200 sq m floor area, will accommodate only 40 homeless persons and the 200 shelters in Delhi: If all of them were to materialise, it will cater to just 8,000 homeless people. The previous MPD mentioned the shelter area per unit to be a minimum of 1,000 sq m. The document was amended in 2016 with 100 sq m as the minimum plot size.

Third, the master plan proposes shelters to be called “night shelters” — rain baseras — defining the shelter as “a premise having the facility for providing night accommodation to individuals without any charges or with token charges”. To unilaterally tweak the term and change the purpose of the NULM-SUH, a national government policy, is a grievous error. The NULM-SUH and numerous court guidelines are clear that shelters are 365 days, 24X7, open to all, accessible to all. Draft Delhi Master Plan 2041 does not have the right to impinge, alter the definitions of a central government programme. The last Delhi Master Plan was a trend-setter for other cities and introduced the category of “shelters” in urban planning, whereas the draft for 2021-41 has turned regressive by reducing the plot size and ignoring the requirements in terms of space and facilities of the homeless population.

Fourth, the draft plan does little by suggesting anything concrete and tangible in reservations of land parcels based on the actual location and need for night shelter. This is assumed to be decided by the Local Authorities/GNCTD based on practical demand/ assessment, presumably at a later date. This is a dubious proposition considering the set standards already meet the proposed norm and only houses 10 per cent of the population. Also, equally, equivocally, the draft suggests “night shelters should be made in existing buildings or shall adopt strategies such as integrated complexes with commercial space on the ground floor and night shelter on the first floor”. A welcome move, but how and when this proposition will materialise is unclear.

Fifth, the 2041 draft plan falls into the trap of viewing shelters as sheds/structures to sleep under and fails to recognise the holistic approach to addressing homelessness. Thereby, apart from the area and FAR, no mandates have been made by the authority on the development control norms. The many facilities needed for these shelters are left unaddressed, clearly ignoring provisions guided by NULM-SUH for spatial standards of the shelters. There is a clear absence of typologies (categories of shelters), facilities (toilets, bathroom and storage), community services (kitchen, childcare, recreation spaces, training centres), location (labour chowks, mandis, industries and transit linkages), and shelter standards (utilisation of space for varied activities). Also, remember that these shelters played a crucial role during Covid waves and acted as community kitchens and shelters for the needy.

The DDA should immediately incorporate the NULM-SUH norms. There should also be a clearly articulated plan for the additional development of shelters. It must also include clear guidelines as to how many shelters should be available in the coming years in coordination with the Delhi Urban Shelter Improvement Board (DUSIB), the primary agency responsible for the betterment of the homeless. Also, more appropriate terminology should be used for shelters.

(The writers are members of the Main Bhi Dilli campaign, a people’s collective aiming to make urban planning in Delhi more social, inclusive and participatory)