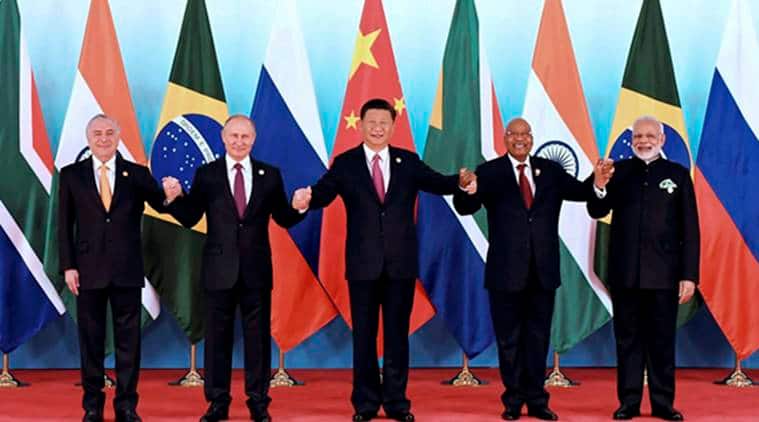 Facing international backlash and simmering domestic discontent due to his mishandling of the COVID-19 pandemic, Chinese President Xi Jinping seems to have made a tactical move of whipping up nationalist sentiments in his country. In order to deflect domestic and international pressure on Beijing, Xi has opened almost all possible contentious fronts, including the South China Sea dispute and the ongoing border stand-off with India.

China’s untimely and unnecessary belligerence has already affected the outcomes of the World Health Assembly and the Russia-India-China Summit — two key multilateral forums. Next in line is the BRICS grouping, especially if Beijing further escalates border tensions with India. The recent border clashes between the Indian and Chinese soldiers and the COVID-19 episode have already sharpened fault lines in BRICS.

Established in 2009, BRICS represents the collective voice of the Global South with Brazil, Russia, India, China and South Africa as its members. After its establishment more than a decade ago, BRICS became the first-ever compact non-Western, inter-continental multilateral club. It was lauded as a unique experiment to bring together politically, economically and culturally diverse countries who share a range of concerns and interests with regard to the functioning of the western liberal international order. BRICS has been driven by the idea to challenge, if not dismantle, western hegemony and bring new ideas on the table for global governance.

However, China’s recent actions — from the South China Sea incursions to encroachment in Indian territory — attest to the view that China is firmly attached to its Middle Kingdom hegemonic identity, and cares little for the Global South. The People’s Liberation Army’s actions against the Indian Armed forces have dented BRICS’ image — the action is contrary to the grouping’s emphasis on equality of states in international politics.

For minor tactical gains on the ground, China has strategically lost India. The border stand-off would push Delhi closer to the West, mainly Washington and its allies, signs of which are already emerging. For instance, India recently aligned with the US to oppose the expansion of Special Drawing Rights at the IMF. It seems India has taken this position to counter China’s influence in the IMF. Interestingly, Delhi’s action goes against the BRICS’ demand to reform the Bretton Woods institutions and oppose their domination by the west.

The New Development Bank (BRICS Bank) has also not lived up to the expectations of developing countries as it has failed to extend any financial assistance to them in fighting COVID-19. In stark contrast, the World Bank and IMF have swiftly moved and provided a financial safety net to several countries which has boosted their credentials at the cost of NDB. In April 2020, IMF head Kristalina Georgieva said that 102 of the agency’s 189 member nations are seeking assistance from it to combat the pandemic.

Within the BRICS, China does not enjoy the trust of other member countries. For instance, while Russia does seem to support China at international forums, this is more due to strategic compulsions rather than a conscious choice. Russia has been trying to safeguard its sphere of influence in the post-Soviet space from China’s vigorous push through its Belt and Road Initiative (BRI). Moscow’s relations with the US and the EU have deteriorated after the Crimean crisis, thereby leading to its greater dependence on China. In Brazil too, there has been a social media backlash against China, while its education minister insinuated a link between the COVID-19 pandemic and China’s plan for world domination.

African people have suffered racial discrimination in China during the COVID-19. This is a sensitive issue for the African community, to which South Africa cannot remain oblivious. In India, public opinion has turned against China leading to a boycott China campaign. It would be difficult for the Indian government to conduct business as usual with China anytime soon.

The BRICS is mainly portrayed as a grouping of fast-emerging economies with huge market potential. The COVID-19 pandemic might change that perception by knocking down exports and inducing a slowdown in BRICS markets. Brazil, Russia and India are among the top COVID-19 infected nations. In fact, BRICS economies were sluggish even before the pandemic and the trend is likely to continue. The economic basis to keep BRICS intact is likely to face severe strains.

Health diplomacy is another area where the BRICS countries could have cooperated but have failed to do so. India, Russia, and China have sent medical assistance to other countries based on their bilateral relations and interests. BRICS, or the Global South for that matter, hardly figured in their priority list. Brazil, India, and China have enormous manufacturing capabilities which could have been utilised to ensure that poorer countries get early access to the vaccine. Instead, they have their own vaccine development programmes. Russia and China are going solo, while Indian pharmaceutical companies are collaborating with the US, the UK, Australia, South Korea and Israel for developing and distributing the vaccine. A BRICS collaboration for a COVID-19 vaccine could have been a shot in the arm for the grouping.

Recent Chinese actions are creating a rift between China and other BRICS members. Rather than taking BRICS members along and working with them during the COVID-19 pandemic, China has taken the unilateral path to domination, thereby subverting solidarity between nations of the Global South. This would have long-term implications, including creating doubts over the efficacy of BRICS and similar platforms like the SCO and RIC.