Remembering the fall of Delhi, in September 1857

Although both Hindus and Muslims, upper and lower castes fought in the First War of Independence, the wrath of the British Empire fell on the Muslims because they fought under the banner of the Mughal emperor, Bahadur Shah Zafar 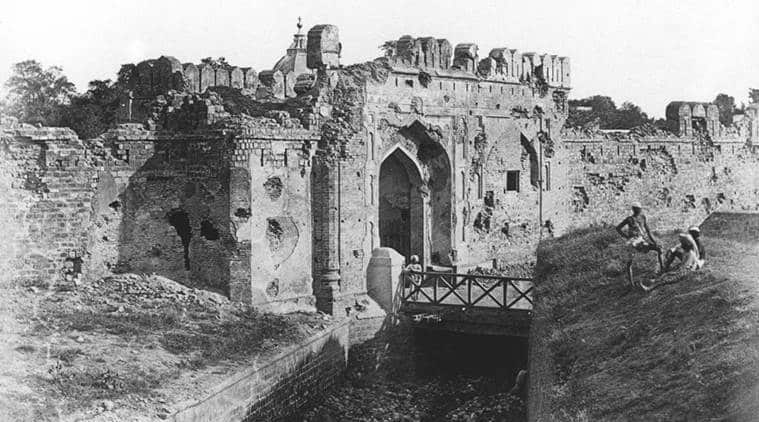 A glimpse of Kashmiri Gate in the 19th century (Wikimedia Commons)

The Trials of Shahjahanabad (Delhi) in 1857

The Delhi that we know of is a huge sprawling city which has now spilled over onto surrounding areas known as NCR. But it wasn’t always so. The first known city of Delhi started in the Aravalli hills in the area now known as Mehrauli. The area was chosen by the Tomar kings for its strong defensive position. As new conquerors and rulers came, the city kept shifting till it reached the banks of the river Yamuna under Firoz Shah in 14th century and from there a little further upto Shahjahanabad (Old Delhi) and finally to the area now called Lutyens’ Delhi.

Each shifting was the result of a change in the old order and in many cases it also meant the meant the dismantling of the old city to build the new one. The nobles and courtiers shifted with their ruler, the rest of the residents remained if they so wished.

Till now no pitched battles had been fought in Delhi itself. Some changes were the result of decisive battles fought elsewhere or through a coup. Then came the first war of independence in 1857 when Indian sepoys of the Bengal Presidency army rose up against their British officers of the East India Company.

After a four-month long bloody siege of Delhi, the British forces were victorious and on September 14, 1857, Delhi fell into their hands. Residents of the Shahr Panah or city of refuge, Shahjahanabad, could not quite believe that what had happened though there had been growing evidence in front of their eyes.

On September 17, when the Mughal Emperor Bahadur Shah Zafar left the Qila to avoid further bloodshed there was panic in the city. On September 20 he was persuaded to surrender and ‘captured’ by Major Hodson who brought him back as as prisoner to Shahjahanabad. By then, the walled city of Shahjahanabad was almost empty. Only those who had sided with the British forces and were assured of safety stayed on.

As the plaque on the Mutiny Memorial, built on the Ridge reads: “On 20th September the city was evacuated of the enemy.” Beneath that is another plaque, this one by the government of India, which says that the “enemy”, as named above, were “those who rose against the colonial rule and fought bravely for liberation in 1857.” The memorial is now called Ajitgarh.

Zahir Dehlvi was an eye witness of the events of 1857 in Delhi. After the fall of Delhi he describes the chaos as residents fled from the three gates of the walled city to fnd refuge wherever they could. Ghalib stayed on because the street in which he lived was inhabited by employees of the Raja of Patiala, who had sided with the British in quelling the ‘mutiny’.

Not everyone was so fortunate. Maulvi Mohammad Baqar who had run the newspaper, ‘Dehli Urdu Akhbar’, exhorting Hindus and Muslims to hang together in the face of a common enemy was shot on December 16. Ghalib’s contemporary and Persian scholar, Maulvi Imam Baksh Sehbai, along with many others of his locality in Kucha Chelan were massacred a few days later.

As Zahir Dehlvi writes: “I have heard that 1400 men from this mohalla were arrested and taken to the river from the Rajghat Darwaza. There, guns bombarded them and the corpses were thrown in the river. The women ran out of their houses with their children, and jumped into wells. The wells of Kucha Chela’n were full of dead bodies.” Though both Hindus and Muslims upper and lower castes fought in the First War of Independence, the wrath of the British Empire fell on the Muslims. This was because the ‘rebels’ fought under the banner of the Mughal Emperor; moreover, many of the local leaders were Muslims.

Another factor is that the flag of revolt was raised first by the cavalry of the Bengal army, which consisted mainly of Muslims. The infantry, which was composed mainly of upper caste Hindus, joined in later. It was thus perceived as a “Mohammedan conspiracy making capital of Hindu grievances”. The Mughal king after a travesty of a trial was exiled to Rangoon (then part of British India) for sedition against his own empire. Most of the royal princes and princesses were either killed, or died while trying to escape or spent their lives in ignominy and poverty.

The Red Fort was turned into a British army camp. As many as 80% of the buildings inside the Red Fort were demolished to give way to ugly barracks. The ones which remained were stripped of their precious stone decorations and defaced. New roads were created, residences and residents removed to provide easy access to the British army in case of another ‘revolt’.

The Jama Masjid was turned into a soldier’s camp by the British with side galleries used as stables. The Akbarabadi and Kashmiri Katra mosques were demolished. Fatehpuri Masjid was sold to Lal Chunamal who turned it into a godown. Zeenat-ul Masajid was turned into a bakery. In ‘Dastanbu’ (a diary of the ‘revolt of 1857’), Ghalib writes that the Hindus were given a proclomation of freedom and allowed to re-enter Shahjahanabad in January 1858, but the Muslims were not permitted to enter till a decade or more later. By then they were impoverished and their traditional arts and craft had suffered. Poets and men of letters left for Hyderabad and Rampur in search of patronage.

In 1862, the Jama Masjid was returned to the Muslims with many conditions, including the right of British officers to continue wearing shoes inside. Fatehpuri Masjid was re-bought from Lala Chuna Mal. A new class of rich traders, led by Lala Chuna Mal emerged who bought the properties of the ousted nobles and prospered. The character of Shajahanabad changed. The old order gave way to the new. But it would take another 14 years, in 1876, for Queen Victoria of England, to take on the additional title of Empress of India. Rana SafviRana Safvi is a writer, historian, and chronicler, of Delhi and other ... read more