As AAP stakes all for the Lok Sabha contest, it will also be judged on its record in governance. 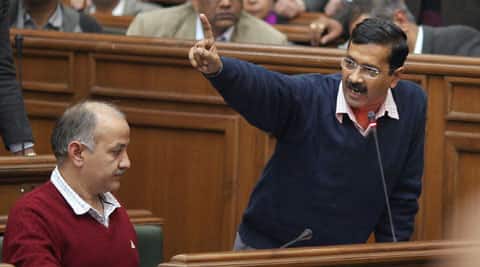 The AAP government fell, finally, over the question of due process and respect for the law. (PTI)

No matter how the party paints it, the end of the Aam Aadmi Party government in Delhi, forty-nine days after it was sworn in, was not prompted by a face-off over corruption. Neither did it come because the “establishment” parties toppled it. In fact, the Congress maintained steadfast support, despite the daily disagreements.

The BJP also went along with the Jan Lokpal Bill. The AAP government fell, finally, over the question of due process and respect for the law. On Friday, the AAP tried to bulldoze its bill through, despite the lieutenant general of Delhi pointing out that under the 1991 act that gave Delhi quasi-statehood, a bill of this kind needed to be placed before him first. The Jan Lokpal Bill was ultimately held back, but only because the BJP and Congress impressed upon the  speaker that as the custodian of the assembly, he could not roll over constitutional decorum and disregard the lieutenant governor’s instruction.

Arvind Kejriwal clearly hopes to leverage this moment into Lok Sabha success. As it enters the larger arena, however, the AAP will be judged not only by what it preaches but also by its practice. What has it demonstrated in its shortlived stint in power? The party will claim credit for the subsidies in water and power, FIRs against powerful politicians on allegations of corruption, and the still-born Lokpal and Swaraj Bills. But each of these missions has been problematic, pointing at the AAP’s unwillingness or inability, or both, to reach and reform the root of the problem. On water and power, for all its pro-poor claims, it chose to go on a subsidy spree for the middle class. On corruption, it failed to move towards instituting transparent processes or reducing practices of discretion, preferring showy sting operations instead. Most troublingly, its law minister’s moral policing, and the AAP’s insistent and self-righteous defence of it, showed up the party’s disregard of due process and its tendency to go with an illiberal majority consensus rather than defend human rights. Instead of tilting the state towards becoming more accountable and non-arbitrary in various areas, the AAP simply claimed that it knew best. And anyone who critiqued its decisions and actions was placed on a steadily lengthening list of Them, the Corrupt.

In government, the AAP has made deep errors of judgement in legislation and administration. For now, at least, it has proved that its main talent — and interest — is insurgency.

How nutrition and diet can influence autoimmune diseases