No evidence to show labour laws are the only, or even main, constraint to growth. It is not clear that the rigid law on retrenchment is always the binding constraint on manufacturing expansion.

Many economists and businessmen regard the reform of labour law as vital for the proposed revival of the manufacturing sector in India. In a widely noted move, the Rajasthan government has already taken a step towards amending Chapter VB of the Industrial Disputes Act (IDA), raising the exemption limit in the law that restricts laying off workers without government permission to firms with more than 300 workers. The Haryana government has also indicated similar intentions. Such experimentations at the state level, particularly when the implementation of labour laws is in the hands of state governments, is in principle a step in the right direction. But there are reasons to believe that if people expect big changes in output and employment simply as a result of such reforms, they may be in for a big disappointment.

First, it is not clear that the rigid law on retrenchment is always the binding constraint on manufacturing expansion. Take the highly labour-intensive garments industry, for example. A combined dataset (for formal-sector firms from the Annual Survey of Industries and informal-sector firms from the National Sample Survey) shows that about 92 per cent of garment firms in India have fewer than eight employees (the bunching of firms is around the eight-employee size, not the below-100-employee size, as one would have expected). Labour law cannot discourage an eight-employee firm from expanding to an 80-employee firm since Chapter VB of the IDA does not kick in until the firm reaches the size of 100 employees. So the binding constraints on the expansion of that eight-employee firm may have to do with inadequate credit and marketing opportunity, erratic power supply, wretched roads, bureaucratic regulations etc. There are good statistical studies by some economists which show that states with more rigid labour laws have had lower industrial growth and that labour laws can be a constraint. But these studies do not show that they are the only or even the main constraint. I do not know of a single statistical study or growth decomposition exercise in India that shows the relative dominance of the labour law constraint over other constraints. By constantly repeating the same objection about labour laws, some people may be barking up the wrong tree.

Second, Rajasthan is not the first state to relax Chapter VB. Gujarat relaxed it for special economic zones in 2004, Andhra Pradesh did so in 2006. Uttar Pradesh’s 1983 relaxation, which remained in force for 20 years, applied to the whole state — it raised the exemption limit to what Rajasthan is proposing now. I have not seen any serious study of the effects of these relaxations on job creation. Contrary to the recent election propaganda, the Gujarat model of development has not been particularly exemplary on job creation. A large part of its high manufacturing growth has been in petrochemicals and refineries, which are highly capital intensive. Does anyone believe that the UP relaxation for nearly 20 years led to a great many manufacturing jobs? If that did not happen, it may be largely due to the other constraints mentioned above. At an all-India level, why is it that the large and high-growth service sector has led to such little job growth (outside construction) over the last two decades? The IDA applies to industries, not to the service sector.

Third, over the decades, how many states have really strictly followed the labour laws? There are many cases of a state government looking the other way when they are violated. An important part of labour laws in India is the Contract Labour (Regulation and Abolition) Act, which restricts employment of short-term workers without benefits. Yet, it is well known that this act remains mostly on paper. According to an estimate based on Annual Survey of Industries data by A. Sood, P. Nath, and S. Ghosh in “Deregulating Capital, Regulating Labour” (Economic and Political Weekly, June 28), in 2009-10, about half of the workers in factories with more than 5,000 workers were employed through contractors. In factories employing between 100 and 5,000 workers, more than a quarter were contract workers. Similarly, an estimate from National Sample Survey data suggests that in 2011-12, about 80 per cent of workers in organised manufacturing either had no written job contracts or the contract was for less than one year. All this has clearly given employers a great deal of flexibility. If Indian labour laws were really that stringent in practice, how is it that during the downturn around 2008, nearly one million workers quickly lost their jobs in labour-intensive export sectors?

I am actually very much in favour of labour law reform. I’d even support abolishing the firm size limit on retrenchment altogether, provided there is a provision for adequate unemployment benefits. Allowing more flexibility in hiring and firing has to be combined with a reasonable scheme of unemployment compensation from an earmarked fund, to which employers as well employees should regularly contribute. No Indian politician has yet gathered the courage or imagination to come up with such a package deal.

More importantly, the whole gamut of Indian labour laws requires a major overhaul, not just Chapter VB of the IDA. The Trade Unions Act, 1926, allowing any seven workers to form a union, rampant union rivalry and lack of recognised trade unions as negotiating agents etc have led to a highly fragmented labour movement and a chaotic shop floor. More than 10 years back, the Second National Commission on Labour made some useful recommendations to change this state of affairs, but they remained mostly unimplemented. Meanwhile, there are some changes afoot in the grassroots Indian labour scene. While some businessmen continue to think in an adversarial way of “flexibility” as being “union-free”, there are new kinds of party-independent unions (for example, the New Trade Union Initiative), which are trying to mediate in the shaping and sustaining of labour-friendly practices that are compatible with global competitiveness and high productivity. Instead of constantly repeating the same mantra about Chapter VB, the Indian policy community should think of imaginative overall reforms that may help both labour and capital.
The writer is professor of graduate school at the department of economics, University of California, Berkeley
express@expressindia.com

Hung out to dry 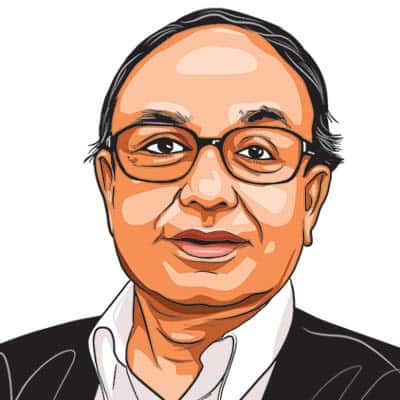 Pranab BardhanThe writer is professor of graduate school at the department of econom... read more