An area of silence

Election presents an opportunity for participation, representation — but not for Gujarat’s Muslims 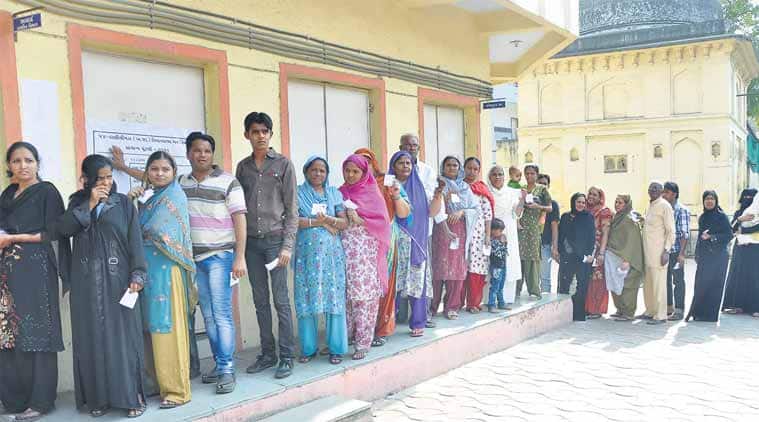 While different communities in Gujarat have taken the opportunity offered by elections to magnify their demands, this has not happened in the case of the Muslims.

There is something different about the Gujarat election this time. After ruling the state for over two decades, the BJP faces challenge from several civil society movements. The Dalits, the OBCs, the Patidars, the farmers, all are demanding justice as they have been left out from the much-touted development in the state. Unfortunately, there is no democratic movement of Gujarati Muslims despite continued social and political marginalisation as well as non-redressal of the harm done in the communal violence of 2002. This raises several troubling questions concerning the lack of democratic leadership in the community, the role of political parties and, most importantly, citizenship and democratic participation of the largest minority.

While different communities in the state have taken the opportunity offered by elections to magnify their demands, this has not happened in the case of the Muslims. The Muslim leadership in the state is largely religious and entirely male. Nobody knows what their take on democratic participation and representation is.

Besides, this religious leadership has left no stone unturned to undermine or trivialise any emerging leaders. Jignesh Mewani could mobilise the entire Dalit community through democratic protest in the wake of the Una atrocities in the last couple of years. He and other leaders have been making democratic demands based on the constitutional framework. And they have achieved this without allying with any political party. But the only time Muslim leaders in the state organised public rallies in recent times, one each in Ahmedabad and Surat, was when the triple talaq petitions were being heard by the Supreme Court.

These rallies demanded protection of the Shariat as understood by them and were against the Muslim women’s movement for gender justice. They seemed to have learnt no lessons from the Uttar Pradesh assembly poll outcome. Although there is no statistical evidence yet, it is widely believed that the BJP gained in UP by supporting the abolition of triple talaq. If so, the question arises: Why can’t the so-called Muslim leaders see the writing on the wall? It is an unresolved mystery as to why other political parties in UP did not support the Muslim women’s legitimate demand even as they projected a commitment to secularism and equality for minorities. Is it that the worldview and mindset of these political parties is still caught up in the 1980s, when Shah Bano happened? If so, they are certainly in tune with the Muslim leaders.

Of course, none of them seem to have an inkling of the aspirations of young Muslims, leave alone women. In Gujarat, there has been a lack of democratic protest even during 2002, and subsequently, whatever protests took place were organised by voluntary organisations and not the Muslim leadership. The Muslim leadership, read religious leadership, hardly went beyond distributing relief materials and housing.

Muslims comprise 9.67 per cent of Gujarat’s population as per the 2011 census; with a degree of concentration in urban ghettos upto nearly 15 per cent. The Sachar Committee report found Muslims in the state better placed in terms of literacy (73.5 per cent vis-à-vis 59.1 per cent nationally), work participation ratio (61.1 per cent vis-à-vis 54.9 per cent), sex ratio (937 vis-à-vis 936). Yet, the picture is not encouraging overall, as the incidence of poverty was found to be 34 in urban areas, which is nearly double of the state average of 18.

Apart from this, Gujarat remains a polarised state where Muslims live in ghettoes. The community lacks a political voice in the state. The survivors of 2002 have been nearly forgotten and left to languish in make-shift colonies without compensation and rehabilitation. Their displacement has never become a political issue. In the period 2002-2009, over 200 Muslims were put behind bars for ostensibly carrying out acts of terror. Of these, quite a few have been acquitted by the Supreme Court for lack of evidence but only after they spent years in jail.

The Congress and the BJP both are trying hard to win over the support of Dalits, OBCs, Patidars, farmers in the state. Simultaneously, both are steering clear of the Muslims. Elections present an opportunity for participation and representation in a democracy — but seemingly not for Gujarati Muslims.

The BJP has consistently refused to field Muslim candidates in the state despite the slogan “sabka saath sabka vikas”. At a recent public gathering, Congress leaders brushed aside a question about Muslim participation saying it was a non-issue. The two incumbent Muslim MLAs are not known to have raised any substantive issues concerning the community.

It is true that all citizens are equal in democracy but it is equally true that citizens don’t get their due unless they demand it consistently. There are several instances where we are witnessing the marginalisation of different communities and violation of their rights despite constitutional safeguards. No group or community can afford to sit tight and hope that they will be counted in just based on their presence in the populace. The Muslims in Gujarat, as elsewhere, need to understand this fact. The domination of religious leadership and absence of enlightened social leaders is hurting the Muslim community. The community needs to sift the obsessions of the religious figures from the real needs of the ordinary Muslims, such as education, jobs, housing and social harmony.
Of course, these are the needs of all Indian citizens.

The community needs leaders who take up various issues within the community and engage with all others in our multi-cultural multi-religious society. It needs new leaders who openly believe in the constitutional values of justice, equality, pluralism and lead the Muslims along democratic lines and build bridges across religious divides. Only then will the political parties take them seriously.

‘What can I do for the world? Maybe, somebody needs theatre’