The excise duty, which often acted as a “catalyst” to inflation has been virtually left untouched for the purpose of revenue. 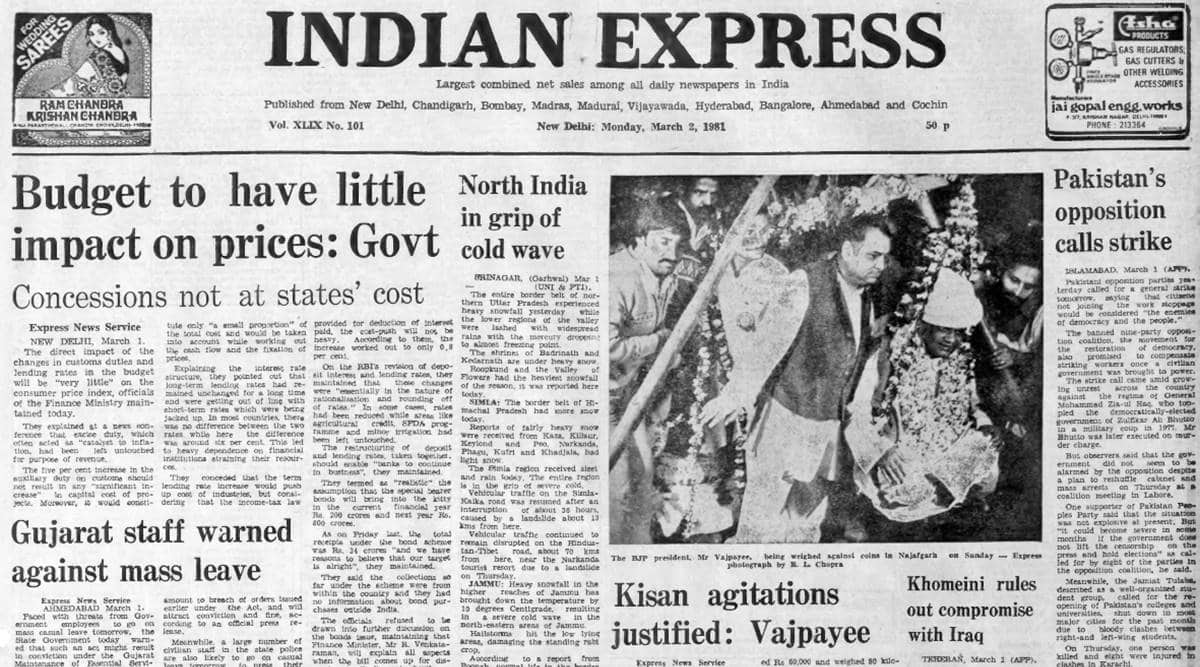 This was the front page of The Indian Express, forty years ago.

The direct impact of the changes in customs duties and lending rates in the Budget will be very little on the consumer price index according to senior officials of the finance ministry. They explained that the excise duty, which often acted as a “catalyst” to inflation has been virtually left untouched for the purpose of revenue. The five per cent increase in the auxiliary duty should not result in significant increase in the capital cost of projects, they pointed out. Moreover, it would constitute only a small proportion of the capital cost and would be taken into account while working out the cash flow and the fixation of prices. Explaining the interest rate structure, they pointed that for a substantial period of time, the long-term lending rate had remained unchanged and were getting out of line with short-term rates which were jacked up.

The Bharatiya Janata Party leader, Atal Bihari Vajpayee, stressing the need for a rural-oriented policy, said that the farmers’ agitation in different parts of the country was absolutely justified, in addition to being completely apolitical. Reiterating his earlier “challenge” to Prime Minister Indira Gandhi to discuss the farmers’ problem, he said that she had instead organised a rally of her own. “She appeared to be angry, ” Vajpayee alleged, “perhaps she did not know what to tell the large gathering”.

US mafia in Delhi

An Egyptian national, strongly suspected to be a contract killer, lived in India for six months since his arrival in the country in October 1980. Joseph Fouad, who lived in a posh South Delhi locality, left the country on February 20 following notice issued to him. He is said to be part of the narcotics mafia in the US and is reportedly on parole in one such case.