Calling Putin’s bluff, by other means Ukraine’s cyberactivists insisted on #RussiaInvadedUkraine to remind Western leaders and journalists who are loath to use such plain terms that our weak words are an unnecessary concession to Putin.

Last week, Russia’s president, Vladimir V. Putin, said he could take Kiev in two weeks. This week, he disavowed a ceasefire, then proposed a peace plan. These zigzags did their job, leaving the West confused about his intentions, just as the European Union and Nato were meeting to figure out how to counter them. Now, in the information war, Ukrainians are striking back. When Russian soldiers openly engaged Ukrainian forces at the end of August, a new hashtag began to trend on Twitter. Invented by a Belorussian and enthusiastically promoted by Ukrainians, #RussiaInvadedUkraine was used nearly a half a million times in the first few days.

In this conflict, technologically driven activism has become characteristic. Ukraine’s Maidan revolution began with a post on Facebook, and a “nerd unit”, staffed by volunteers who are crowdsourcing the funding for their drones, is operating in the contested east. What’s new and important about #RussiaInvadedUkraine is its clear language.

One of the features of Russia’s war against Ukraine has been the reintroduction of Newspeak into public discourse. The Kremlin has used misinformation, propaganda and outright deceit to frame the debate. Ukraine’s cyberactivists insisted on #RussiaInvadedUkraine to remind Western leaders and journalists who are loath to use such plain terms that our weak words are an unnecessary concession to Putin. It may seem precious, when the war has already claimed at least 3,000 lives, to fuss over the proper use of language. It isn’t. George Orwell, in his famous 1946 essay, “Politics and the English Language”, argued that the battle against poor English wasn’t frivolous because “the slovenliness of our language makes it easier for us to have foolish thoughts”.

There is a case for fudging. By calling Russia’s latest aggression against Ukraine an “incursion”, as President Obama did when Russian tanks first drove in, we could be leaving Putin an easier way out. If he never “invaded”, the logic goes, he won’t need to face the humiliation of retreat. That might have been a reasonable theory this summer, after the destruction of Malaysia Airlines Flight 17. Russia had already invaded and annexed part of Ukraine — Crimea — and Russian citizens and Russian weapons were spearheading the insurgency in the Donbass region in the east. But it was just possible that Putin would choose to end a conflict that had already cost Russia billions of dollars. He didn’t. Instead, as the Ukrainian military was making gains in the Donbass, Putin opted for further escalation by directly sending in Russian troops and equipment.

Putin has already muzzled Russia’s once boisterous free press, exiled and imprisoned opposition leaders and assumed direct control of the mass media. If he opts for a compromise over Ukraine — and the best scenario on offer right now seems to be an ugly and destabilising “frozen conflict” in the Donbass — he won’t need the West to help him justify himself at home. He has a powerful domestic propaganda machine to do that.

By adopting Putin’s Newspeak, we aren’t offering him a useful diplomatic fig leaf. We are convincing him of his strength and our weakness. When Russian troops fighting in Ukraine are described on Russian state television as being “on vacation”, the Kremlin is asserting not only that it can send soldiers to Ukraine, but that it can explain their presence with an aggressively transparent excuse that amounts to thuggish mockery. Putin is challenging us with a double bluff, one military and one rhetorical. Reasonable people can differ on how much we should be supporting Ukraine and on how strongly we should be sanctioning Russia. But it is no longer possible to disagree about what is happening. This is not a civil war, nor is it a fascist coup. Eastern Ukrainians are not rising up against an oppressive regime in Kiev. This is partly a fight of freedom of speech against censorship. In the Ukrainian-Russian conflict, moral clarity is essential, but to get there we need linguistic clarity, too: Ukrainians decided to build a democracy at home and to make a trade deal with Europe; Russia invaded. Confronting Putin is a painful prospect, but so is living in a world governed by these new rules. Putin and his propagandists understand this very well, which is why they like to present us with the easier option of obfuscation. That’s the most dangerous choice of all. #RussiaInvadedUkraine. Please retweet.

Freeland is author of ‘Sale of the Century: Russia’s Wild Ride From Communism to Capitalism’ and a Liberal member of the Canadian parliament.
The New York Times 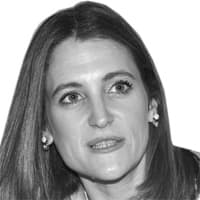