Why is there no debate in Parliament?

Feroze Varun Gandhi writes: MPs are encouraged to blindly follow the party whip. The executive is less accountable and laws are passed with inadequate scrutiny. The Monsoon Session of the Indian Parliament in 2021 saw the Lok Sabha clearing over 18 bills with about 34 minutes of discussion for each. The Essential Defence Services Bill (2021), enabling the government to prohibit strikes, lockouts and lay-offs in units in the defence industry, saw 12 minutes of debate in the Lok Sabha, while the Insolvency and Bankruptcy Code (Amendment) Bill (2021) had just five minutes of debate (PRS India, 2021). Not one bill was referred to a parliamentary committee. And with the voice vote becoming the norm, MPs were rarely mustered in the House to record votes. The Parliament’s productivity is notable (129 per cent for the Lok Sabha in the last session in 2022) but a tradition of debate has been lost. Has Parliament become a mere post office?

Deliberation on legislation is a design feature of parliamentary democracy. In the US, Senator Ted Cruz was given the opportunity to speak for 21 hours and 19 minutes in the Senate House, against Obamacare in 2013. When parliamentary proceedings have time set aside for such debates, the quality of legislation improves, while enabling consensus. Meanwhile, in India, the Farm Laws Repeal Bill (2021) was passed in just eight minutes (three minutes in the Lok Sabha, five minutes in the Rajya Sabha), reducing MPs to a mere headcount. It doesn’t have to be like this — India’s constituent assembly debates to frame the Constitution were initiated in December 1946 and went on for 166 days, wrapping up only by January 1950. Ideally, parliamentary conventions would be upheld and strengthened, with free votes allowed for MPs, and the process of deliberation revived. Additionally, MPs rarely have adequate resources to conduct in-depth research — a typical MP gets an allowance of Rs 40,000 per month to hire a legislative assistant. Meanwhile, in the UK, the average MP salary is £84,144, while in 2021, they got an allowance of £193,000-2,16,000 to hire legislative assistants. To revive deliberation, the government should raise funding for parliamentary research.

A parliamentary democracy, by design, should ensure government accountability. In Westminster, the British prime minister is required to answer questions from MPs in the House of Commons every Wednesday, from 12 pm to 12:30 pm. This can be a mix of tabled and un-tabled supplementary questions, with the prime minister not knowing what queries will be asked. The result — as often seen on television — is a raucous set of probing questions and hesitant answers, with the government kept on its toes. Even during Covid-19—induced lockdowns, PMQs were held virtually, enabling accountability (India, notably, scrapped Question Hour during this period). In India, this tradition has rarely been considered, with the prime minister and ministers often given queries in advance.

Meanwhile, another avenue of ensuring accountability is the parliamentary committees — in the US, Senate and House Committees scrutinise laws, confirm government appointments, conduct investigations, and hold hearings. In the UK, the House of Commons ran a public reading mechanism in 2013 where members of the public could add comments to draft legislation via a web portal, with 1,000 individuals participating with over 1,400 comments. In India, long-term development plans are simply not subject to parliamentary scrutiny, with just annual outlays approved. Where such committees have taken initiative, they have had an impact (for example, the JPCs on allocation and pricing of Telecom Licences and Spectrum in October 2013, on irregularities in Securities and Banking Transactions in December 1993, etc). New Zealand makes it compulsory for all bills to be referred to a select committee for scrutiny.

Another feature of parliamentary democracies is allowing MPs to take initiative. Sometimes, this can take the form of private member bills. The UK has passed seven private member bills since 2019, while Canada has passed six bills. In India, meanwhile, just 14 private member bills have been passed by both Houses since 1952 (six of them when Nehru was in power). While limited, such bills serve as a reminder of what could have been — the Women’s and Children’s Institutions (Licensing) Act, 1956 (No. 105 of 1956) by Rajmata Kamlendu provided for the “licensing of institutions established and maintained for the reception, care, protection and welfare of women or children”. The Code of Criminal Procedure (Amendment) Bill (1953), introduced by Raghunath Singh, sought to empower higher courts to stay or suspend orders passed by lower courts. Ideally, we should set up mechanisms to enable private member bills to gain a hearing and even to be put to vote.

Beyond Parliament, for most MPs in India, the ability to drive change in their constituencies is limited. Consider the Members of Parliament Local Area Development (MPLAD) scheme, which enables MPs to recommend select development initiatives to the local district authority, with a maximum cap of Rs 5 crore. With about 6,38,000 villages in India, the average parliamentary constituency ends up having 1,000 each. If one were to equitably divide the sum, it would add up to Rs 15,000 per locality (barely enough to have three metres of concrete road). And even this amount was suspended over the past 1.5 years, with the government reportedly “saving” Rs 6,320 crore. Meanwhile, in the Philippines, the Priority Development Assistance Fund provides funds to senators for small-scale infrastructure and community projects. Such schemes unlock constituency-specific development, enabling bottom-up democracy.

Instead, we have institutional mechanisms to stifle debate and remove initiative for MPs. The anti-defection law punishes any errant MP or MLA who leaves one party for another – going against the party whip could lead to an MP losing his seat. The consequence has been chilling, with MPs rarely getting access to any legislation prior to it being tabled. This law has disincentivised MPs to have a distinguished voting record. MPs simply look to press the button highlighted by the whip, with the party system determining one’s stand as a parliamentarian. Consider this: Of India’s 543 Lok Sabha seats, 250 are occupied by politicians who profess to be farmers. And yet, few, if any, of these “farmers” were able to raise their voices on the debate on the three farm laws in Parliament. A vote for one’s conscience has become a rarity in India’s august forum. The anti-defection law has not served its purpose and should simply be scrapped. If not, MPs will not be lawmakers who ideate and debate.

Future portents are grim. The average MP in India represents over 25 lakh citizens — larger than the population of countries like Botswana, Slovenia, Estonia and Bhutan. In comparison, each MP in the UK represents 92,000 citizens, while each member of the US House of Representatives is accountable to 7,00,000 people. With such numbers, no MP can ever adequately represent the interests of their constituents. Of course, by 2026, the Lok Sabha could reportedly end up having over 1,000 seats. While ensuring representation is key, with this, MPs are unlikely to have significant speaking time, let alone space to influence debates or take initiative.

In 1956, Feroze Gandhi introduced a private member’s bill advocating press freedom to cover parliamentary proceedings; this was later codified as the Parliamentary Proceedings (Protection of Publication) Act (1956). Ideally, Parliament and its members would seek to drive an accountable government. Our Parliament must reflect the changing aspirations, restlessness and ambition of the new India, driving accountability and not suborning itself to the executive — it should be a true centre of inquiry.

This column first appeared in the print edition on April 20, 2022 under the title ‘Living in a shrunken House’. The writer is a BJP Lok Sabha MP

Explained: The case against Amway 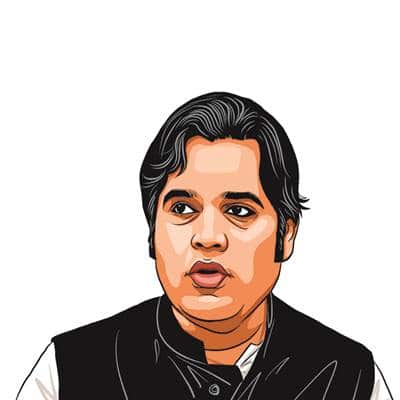