The Russian president got a lot wrong in Ukraine. 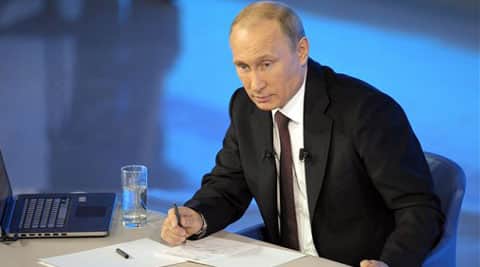 There was a moment at the height of the Cuban missile crisis in October 1962 when Soviet ships approached to within just a few miles of a US naval blockade and then, at the last minute, turned back — prompting then-Secretary of State Dean Rusk to utter one of the most famous lines from the Cold War:  “We’re eyeball to eyeball, and I think the other fellow just blinked.” The crisis in Ukraine never threatened a Cold War-like nuclear armageddon, but it may be the first case of post-post-Cold War brinkmanship, pitting the 21st century versus the 19th. It pits a Chinese/ Russian worldview that says we can take advantage of 21st-century globalisation whenever we want to enrich ourselves and we can behave like 19th-century powers whenever we want to take a bite out of a neighbour — versus a view that says, no, sorry, the world of the 21st century is not just interconnected but interdependent and either you play by those rules or you pay a huge price.

In the end, it was Putinism versus Obamaism, and I’d like to be the first on my block to declare that the “other fellow” — Putin — “just blinked”. In fact, I’d like to say more: Putin got pretty much everything wrong in Ukraine. He thought the world was still shaped by “spheres of influence” dictated from the top down, when Ukraine was all about the emergence of “people of influence” — The Square People, organised from the bottom up and eager to join their own sphere: the world of liberty and free markets represented by the EU.

Putin underestimated Ukrainian patriotism; even many Russian speakers in eastern Ukraine did not like pro-Putin thugs trying to force them to join Russia. And, most of all, Putin underestimated the impact of Western economic sanctions. The world turned out to be more interdependent, and Russia more exposed to that interdependence, than Putin thought. So he blinked. The first flutter was pulling back his troops from Ukraine’s border and letting the election proceed. Because Putin’s aggression in Crimea has spurred Europe to reduce its dependence on Russian gas, Putin rushed to Beijing to conclude a natural gas supply deal with China. The price China extracted is secret and experts “suspect Putin dropped the price of gas significantly for China in a desperate manoeuvre to ensure a steady cash flow for Gazprom in the face of sinking revenue and Western sanctions,” The Washington Post reported. Let’s add it up: Putin’s seizure of Crimea has weakened the Russian economy, led to China getting a bargain gas deal, revived Nato, spurred Europe to start ending its addiction to Russian gas and begun a debate across Europe about increasing defence spending. Nice work, Vladimir. That’s why I say the country Putin threatens most today is Russia.