When a great city dies

Mumbai’s long-standing tradition of openness and tolerance is fast eroding. The recent rash of illiberal incidents that has erupted in Mumbai threatens to further tarnish this already beleaguered city. Once India’s pride, “urbs prima in Indis”, the city struggles today with a host of issues — from choked roads, growing slums and environmental pollution to a development plan that has excluded more than half of its historic sites. But despite this, the professionalism of the city, its “can do” spirit, its laissez faire mantra, its ability to take a cuff on the shoulder with resilience and a sense of humour has prevailed and usually won the day. It is this spirit that is under threat today from the attack on former sheriff of Mumbai Nana Chudasama’s office, the vitriol spewed at Shobhaa De’s innocuous remarks and the attacks on the Dr Bhau Daji Lad Museum for hosting a fashion show. Mumbai’s long-standing tradition of openness and tolerance is fast eroding.

I have known Chudasama for the longest time. He represents the best of what defined Mumbai as intelligent, inclusive, decent and caring. He is known for his acerbic humour, and his political witticisms on a banner outside his office, like the Amul butter and Air India maharaja ads, were among the few welcome markers of public culture in the city. His dinner parties always had a sprinkling of the city’s patriarchs, editors, businessmen and NGO workers. He was president of the “I love Mumbai Society” and every year, he hosted a plant-a-tree campaign, among a host of other initiatives. His daughter is one of the well-known faces of the BJP in Mumbai. My first thought when I read about the attack was, “Dear God, if this can happen to him, are any of us safe in this city?”

It is instructive to look at Mumbai’s civic culture and its development to understand how fast this liberal cultural space is eroding and how important it is to arrest this if we are to fulfil the promise of a globally resurgent India — because Mumbai, in many ways, represents our modern and international face and no amount of Prime Minister Narendra Modi’s vigorous campaigning for “Make in India” or his promise to ensure that contracts will not be abrogated will attract investments if we continue down this path of violence, intimidation and intolerance.

Much of the city was built in the 19th and early 20th centuries by merchants who understood that, to prosper, they needed to live in peaceful co-existence. Early accounts of the city’s marketplaces describe colourful scenes of people of all hues and in a variety of native dresses mingling in easy familiarity. Of course, there were differences, but these were respected and understood, and often communities participated in each other’s festivities. A little known fact is that Mumbai’s patron diety, Mumbai Devi, takes on the dress and accoutrements of different communities — Gujarati, Tamil etc — on different festival days. Hindus visit dargahs and Muslims celebrate Lord Ganesha’s annual arrival in the city.

It is precisely this cosmopolitan spirit that has made Mumbai an international financial centre. The spirit of professionalism and tolerance gives it stability and an edge over other more parochial cities. But the politics of divisiveness and violence has already visited terrible retribution on the city. Mumbai has an active civic culture of debate and dissent that has enabled it to withstand poor governance and political ineptitude, but violence and intimidation are of a different order and they threaten to completely denude the already shrinking space for democratic processes. Educated young people in the city eschew political engagement precisely for this reason and one sees more and more that lumpen elements are capturing this space.

We ban books and movies on the flimsiest of reasons, storm art exhibitions and denounce anyone who does not share our point of view. We spread poison about those who are different from us. Is this what the new India is about? We pay empty lip service to the ideals that our freedom fighters fought for. And every political party and leader claims Gandhiji’s great mantle. But few understand the gravity of his conception of nonviolence. For him, violence was not just physical but had mental and intellectual dimensions as well. For Gandhiji, if you truly believed in nonviolence then you would not see the other through an alienating lens of hostility, contempt or hatred. You would try to bring them around to your point of view by example. Is there any leader today who comes close to this lofty view of coexistence.

Mumbai is the face of a globally contemporary India and we send a poor message to all those, both in India and in the international community, who wish to engage with us when we trivialise and abuse our time-honoured traditions. I have received messages of horror and disbelief, from across the world and India, about what is happening in Mumbai. The city has become the preserve of vested interests that are holding it to ransom. We need strong governance and respect for the law if we are not to completely lose the great city our forefathers bequeathed us. We need to encourage debate and allow for all shades of opinion if they are expressed in a constitutionally compatible manner. Mumbai has always provided India with its creative edge, whether it is Bollywood or business, and the city must continue to value creative expression in all forms — whether on a banner, in a tweet or in a fashion show — if it is to remain “urbs prima in Indis”. 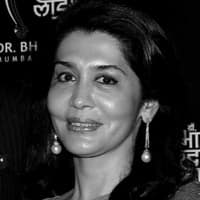