‘Exact words’ is a betrayal

Obviously, someone shared sensitive and protected information. Who was that person? 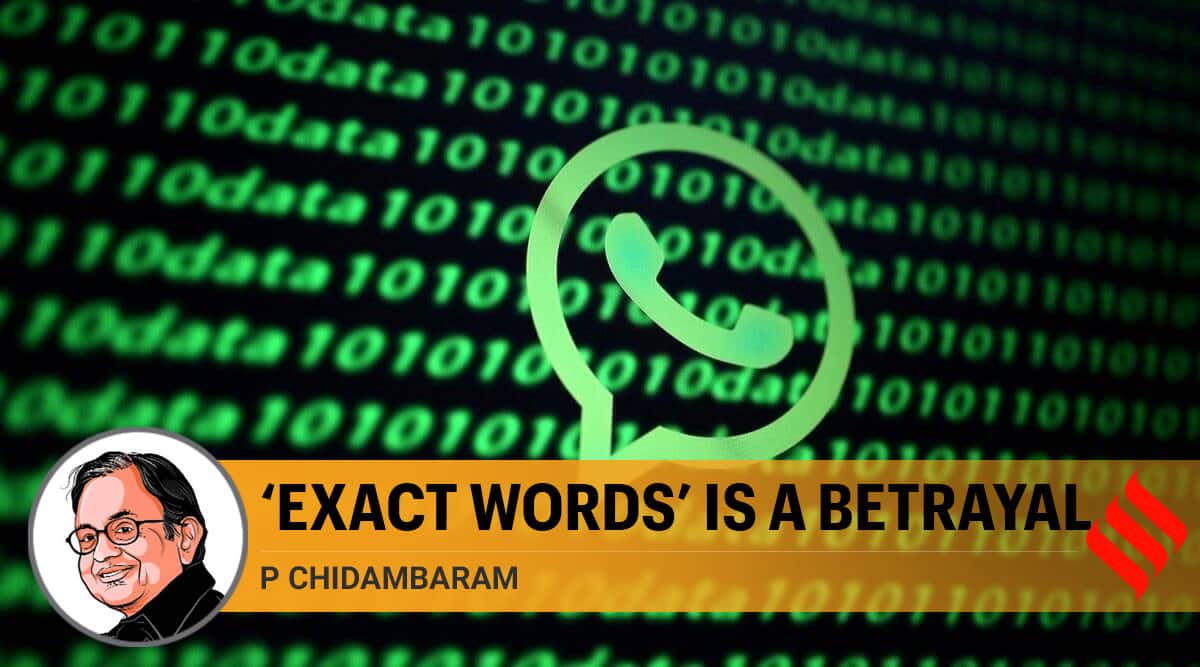 The owners of WhatsApp have long claimed that all conversations on WhatsApp are encrypted from end-to-end and no one has access to those conversations.

The name of the TV channel is not material. The name of the journalist is not material. The accusations in respect of some other matters against the channel are not relevant for today’s column. What are relevant and material are the decision-making process and the decisions concerning national security taken at the highest levels of the government.

The purpose of this column is not to accuse or malign anyone. The purpose is to ask a straightforward question: were sensitive and protected decisions of the government shared with anyone who was not a part of the decision-making process? A supplementary question is, would some of those decisions fall under “official secrets”?

All this is bad news for Mr Mark Zuckerberg, the owner of Facebook, Instagram and WhatsApp, and among the richest persons in the world.

Be that as it may, certain conversations between two individuals have become public. To the best of my knowledge, the published material (in print and on the social media) has not been denied by the individuals concerned. If it is denied, that is the end of the matter as far as this column is concerned; if it is not, certain questions arise.

There was an attack on an Indian military convoy at Pulwama on February 14, 2019. A conversation took place between ‘Journalist’ and ‘Other’ on February 23:

10.31 pm: Journalist: On another note something big will happen.

10.33 pm: Other: Am sure you will and I strongly wish your success

10.36 pm: Journalist: No sir, Pakistan. Something major will be done this time.

He will sweep polls then

10.40 pm: Journalist: Bigger than a normal strike. And also on the same time something major on Kashmir. On Pakistan the Govt is confident of striking in a way that people will be elated.

The attack at Pulwama was an act of terrorism and 40 solders were killed. The defence forces were infuriated. It was believed that Pakistan had recruited and trained the person responsible for the attack. A retaliatory strike was expected. The “conversation” took place on February 23. Three days later, on February 26, Indian Air Force planes struck at Balakot in Pakistan.

I am not concerned with who heard those “words”. That person, I shall assume, was lucky: he was in the right place at the right time! I am concerned about who uttered those words. Why were the words uttered in the presence of a non-government person? Were they uttered with the intention of sharing protected information? While it was widely expected that the defence forces will retaliate to the Pulwama attack, no body could have imagined the “exact words used” to describe the intended retaliation. Obviously, someone shared sensitive and protected information. Who was that person?

Some decisions are Confidential, some are Secret, some are Top Secret, and some are ‘For Your Eyes Only’. A retaliatory strike on a target in Pakistan would be FYEO. I am pretty certain that the decision-making process as well as the decision involved only the Prime Minister, the Defence Minister, the NSA, the Army and Air Force Chiefs and the Commander of the Western Air Command. Even the strike pilots would have been briefed only hours before the strike, and quarantined until the launch. You may draw your conclusions on who used the “exact words” and shared the protected information.

My worry is, was the information shared with any one else who (perhaps unknown to the source) may have been a spy or informer of Pakistan? My second worry is about the “Other” person in the conversation. What was his security classification and did he share the information with anyone?

The collateral damage caused by the conversations was the reputation of the late finance minister Arun Jaitley (may he rest in peace):

12.45 pm: Other: Jaitley is their biggest failure

Journalist: that I agree totally

Shockingly, there was a death vigil over a very ill man.

10.08 am: Journalist: Jaitley stretching it. PMO does not know what to do. PM leaving on Wednesday for France

10.55 am: Journalist: Maintaining him. I expect something by the evening. One of my meetings in delhi this week gets pushed because of this.

I grieve for our country, our Armed Forces and their secrets and, not the least, for the family of Arun Jaitley who served the BJP (and its predecessor, the Jan Sangh) loyally since 1975.