Vikram Patel writes: What the Vande Bharat train says about the lopsided priorities of Indian modernity

Other countries, in particular those we often look up to, have realised the journey to development very differently. While those countries invest in high-quality primary health care and primary education, we invest in ivory towers of 'super-specialty' hospitals and IITs 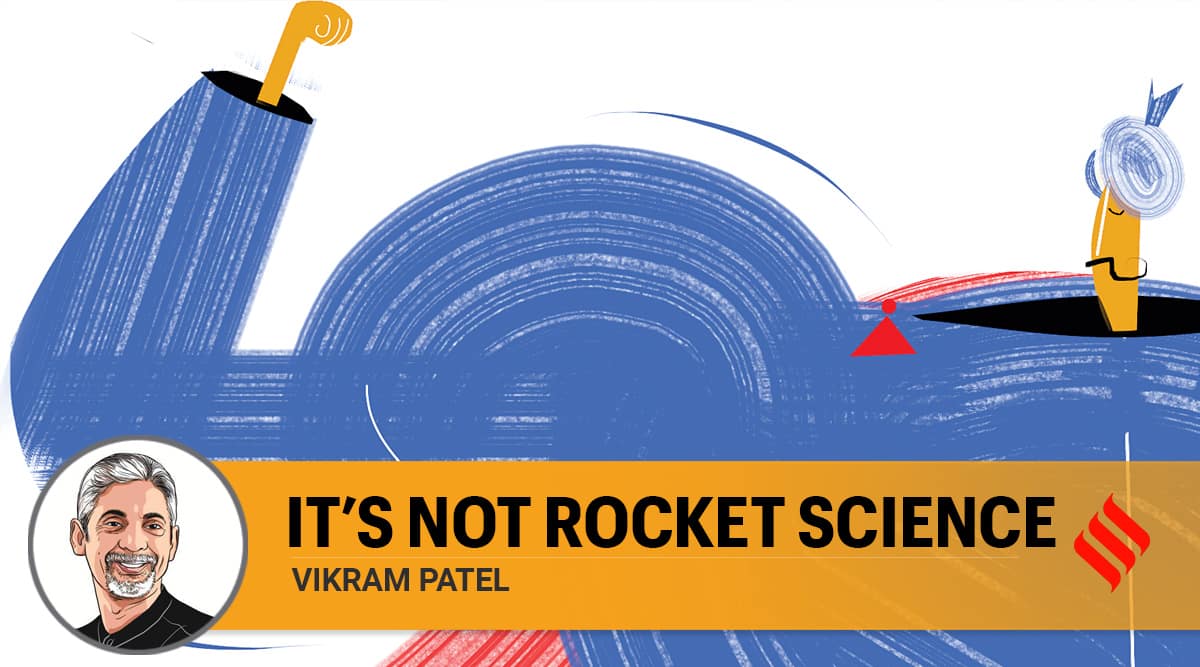 What ordinary Indians need and want is not rocket science, which is really unfortunate because we are great at rocket science. (Illustration: C R Sasikumar)

When the Prime Minister inaugurated the latest edition of the Vande Bharat train recently, India made a huge leap into the future of mass transportation. A senior railway official proudly detailed the “superior” features of the train, which would provide passengers with an “aircraft-like travelling experience” (albeit, even quieter than an aircraft, as testified by the Prime Minister), including reclining seats, automatic fire sensors, CCTV cameras, Wi-fi with on-demand content and more. Indeed, as one commentator noted breathlessly, the Vande Bharat Express was a “new-age train”.

But, to the embarrassment of our railway officials, this new-age train slammed head-on into the “old-age” country on at least two occasions in its very first week. In literal terms, the train crashed into a herd of cows, damaging the aircraft-like nose of the driver coach car, and sending her (the car, not the cows) back to the workshop. While we can breathe a sigh of relief that there were no human casualties, it seems that at least one cow died and there is limited information about the well-being of the others. What I found surprising was not the fact that cows could bring our passage into modernity to a screeching halt, but that the railways had not been prepared for this eventuality given that every Indian has had the experience, at least once in their lives, of swerving their car, scooter or bicycle to avert a head-on collision with a bovine.

On reflection, perhaps it is not at all surprising that the railways built a new-age train but forgot to construct fencing along the tracks to prevent bovine collisions, nor did they hold various local governments accountable for failing to corral the cows, as required by law (and, in doing so, preventing many accidents on our roads too). After all, readers will be well aware of the countless other occasions when the aspirations of our political and elite classes to propel India to her glorious destiny have been rudely interrupted by the “real” India. For those who may not be as aware, here is a list of just some of these inconvenient truths.

We are a country which can simultaneously boast of being home to medical facilities which are so sophisticated that people from other countries troop to them, while most of our primary care clinics don’t have enough doctors and we have amongst the worst health indicators of any country.

We are a country which can be proud of producing more vaccines than any other and yet be home to the largest number of unvaccinated children in the world.

We are a country which can boast of having so much food stored in our granaries that some of it is feasted upon by vermin while tens of millions of our children go hungry and are stunted.

We are a country which boasts the world’s most prestigious engineering institutions which offer a guaranteed visa to serve the US’s university and technology corporations, while half our children are unable to read and write at the minimum level expected for their age.

We are a country where all cars must have seat-belts when even the most basic rules of road-safety such as breaking a red light, driving over the speed limit or down the wrong side of an expressway are not enforced.

We are a country which boasts the richest sports leagues in the world while we perform dismally at most global sporting competitions.

We are a country where we are pioneering the use of technology in every aspect of daily life even though most of our children do not have the digital devices or access to the internet which they needed during the school closures in the pandemic, leading to a historic learning loss.

We are a country where we build beautiful walled residential colonies, complete with faux-European names and swimming pools, right next to a crumbling road overflowing with raw sewage, mounds of garbage and packs of stray dogs.

We are a country that builds ultra-modern infrastructure on the banks of our holiest rivers even while the waters themselves are slowly dying from the most toxic pollution on the planet.

We are a country which boasts that our economic “development” has lifted millions out of poverty while the World Bank recently estimated that the number of people living in abject poverty increased by 5.6 crore in 2020, making up a staggering 80 per cent of the people from around the world who were pushed into poverty that year.

“We are like that only” — thus, goes the saying that some observers deploy to offer some insight into this disorienting gap between fact and fantasy, this bottomless ability some of us have to delink aspirations about our country from reality. In my reckoning, the heart of the problem is the tension between two competing ideas of India as an uber-modern country: On the one hand is the idea of modernity reflected in glamorous tokens and grandiose pronouncements to impress the faithful and the wealthy while, on the other hand, is the idea reflected in achieving universal access to humdrum things like clean toilets, decent housing, drinking water, nutritious food, clinics with doctors and schools with teachers. Proponents of the former idea see no dissonance at all in the fact that our railway tracks must simultaneously host both super-fast trains and lumbering cows, while proponents of the latter, who point out the absurdness of these fantasies, are readily smeared as cynics who are anti-national, in the pay of the CIA, or most likely Pakistani agents.

But what ordinary Indians need and want is not rocket science, which is really unfortunate because we are great at rocket science. What we’re not so good at are the things that are so simple and basic that we overlook them.