What the 1971 refugees have to do with Indian politics today

🔴 Sanjib Baruah writes: Even if half a century later, the civil war that split Pakistan has had a decisive impact on the ideological battle over India’s national identity. 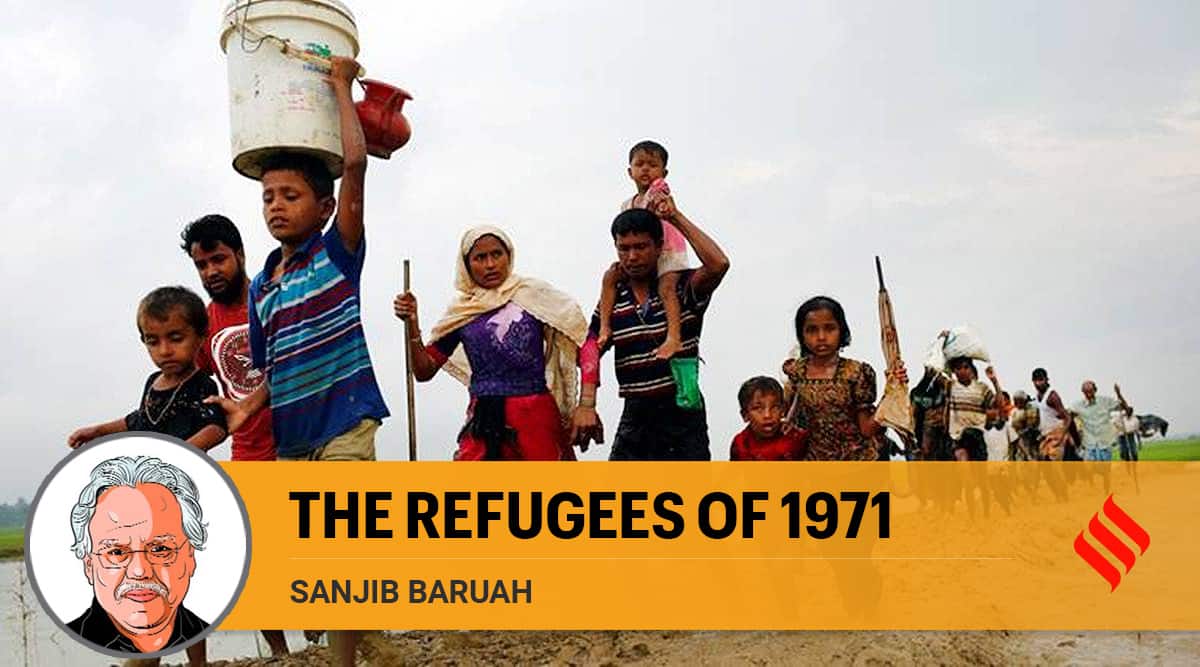 The CAA is built on a fundamentally different set of assumptions about the idea of India than the one that informed Indian policy in 1971.(Reuters)

The civil war in East Pakistan in 1971 — that saw a huge influx of refugees to India — and which led to the break-up of Pakistan and the birth of Bangladesh, is remembered in India mostly for its impact on the subcontinent’s geopolitical landscape. The consequences of the presence of those refugees on our domestic political order do not receive much attention.

The standard story is that most refugees returned home soon after the liberation of Bangladesh. This is partly responsible for the unfounded myth that India’s domestic political order was insulated from the refugee influx. This is, of course, not how the refugee influx is remembered in Assam and other Northeastern states.

There are good reasons to doubt the narrative of near complete repatriation. Indeed, the Indian government has itself cast serious doubts on this narrative on various occasions. The fact that the political effects of the refugee influx have been most pronounced in a region long relegated to the periphery of Indian policy is surely another reason why this myth has persisted.

The fact that the Assam Movement (1979-1985) broke out in the same decade as the Bangladesh liberation war is not an accident. Those six years of political turmoil saw the collapse of four elected ministries, the outbreak of an armed insurgency, and three spells of president’s rule. The violent elections of 1983, including the horrendous Nellie massacre, are also part of this history. The troubles that began with the refugee influx eventually led to the coming of the hard state to Assam in 1990 when the whole of Assam was declared a “disturbed area” under the Armed Forces Special Powers Act (AFSPA). 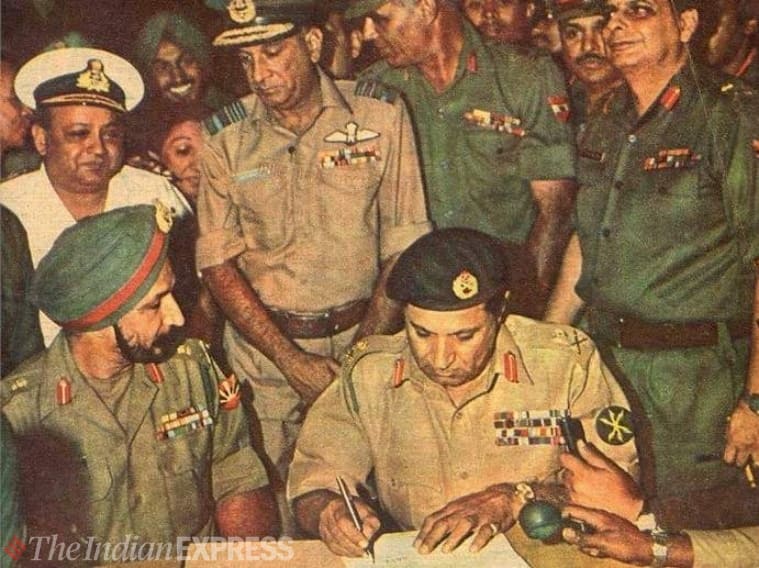 The instrument of surrender is signed on December 16, 1971 (Express Archive)

The AFSPA regime has remained in force in Assam partly because the legacies of the Assam Movement remain live, unresolved issues in the state’s politics. If these are considered among the effects of the Bangladesh liberation war, the geopolitical benefits that accrued to India need to be balanced against these significant domestic political costs, even though they are concentrated in a single “peripheral” region.

There would have been no Assam Movement had there been no Bangladesh liberation war. The sheer size of the refugee population gave new life to old fears that migrants from eastern Bengal risk turning Assam’s khilonjia or autochthonous peoples into minorities in their own lands. It is not just the presence of refugees or their numbers that produced this anxiety. The phenomenon that sociologist Kamal Sadiq calls “suffraged non-citizens” gave political force to those fears. Since the exercise of franchise in India relies on rudimentary documents that can easily be obtained through informal means, the distinction between citizens and non-citizens becomes blurred. The perception that the number of voters had risen abnormally in the aftermath of the refugee influx became the trigger for the Assam Movement.

Had all refugees gone back to their homes, the foreign nationals’ issue would not have rankled Assam and the country for all these years. Indeed, it has been the conventional wisdom in Assam that the Assam Movement failed in its primary objective. This made the Assam Accord, which ended the Assam Movement, a hallowed document in the state’s political discourse. When the BJP began to move on the citizenship amendment bill, the resistance to it in Assam focused entirely on the fact that it grossly violates the Assam Accord.

A barely hidden secret about the refugee influx was that a majority of those who fled East Pakistan to India were Hindus. This was only to be expected since the Yahya Khan regime viewed the liberation movement as an Indian conspiracy and its repressive backlash fell upon most of the region’s Hindu households. Of the estimated 9.7 million refugees who migrated to India in 1971, 70 per cent were Hindus. The West Pakistani generals had calculated that by forcing millions of East Pakistani Hindus to flee to India they would weaken Bengali nationalism as a political force. Their aim, as the sociologist, late Partha Nath Mukherji, observed at the time, was “to uproot the Hindus, not to eliminate them, and in this they seem to have succeeded admirably”.

Ironically, while Indian officials liked to describe the Pakistani military’s massacre of East Pakistanis as genocide, “the best case for branding these atrocities as genocide”, as Gary Bass of Princeton University puts it, “was one that India did not dare make”. They feared that “publicising anti-Hindu genocide could have splintered Indians on communal lines . . . possibly setting off riots”. The architects of the Assam Movement, of course, saw the influx for what it was: That there were both Hindus and Muslims among the refugees, but that a clear majority were Hindus.

The Yahya Khan regime’s strategy of demographic engineering met its match in prime minister Indira Gandhi. She was determined to send the refugees back. Indeed, stopping the refugee influx and ensuring the safe return of the millions already in India were the key goals of India’s military intervention.

Advertisement
Also read |The birth of Bangladesh, stories from Dhaka, women in the workforce, economy, and more

Whatever the official rationale for the Citizenship (Amendment) Act of 2019, it marks a decisive break from the Indian policy of refusing to yield to the demographic engineering strategy of the West Pakistani generals who ran the war in East Pakistan. The CAA effectively accommodates the Hindu refugees of 1971, that is the majority of the refugees (and also people of other minority faiths, which was added for euphemistic reasons). But it excludes refugees that are Muslim. Rather remarkably, top BJP leaders continue to claim that they are working to implement the Assam Accord. But obviously they can do this only by shifting attention to the accord’s secondary clauses that are unrelated to the foreign nationals’ question.

The CAA is built on a fundamentally different set of assumptions about the idea of India than the one that informed Indian policy in 1971. With its adoption, it could be said that the civil war that split Pakistan has come to have a decisive impact on the ideological battle over India’s national identity, even if half a century later.

This column first appeared in the print edition on December 15, 2021 under the title ‘The refugees of 1971′. Baruah is Professor of Political Studies at Bard College, New York.

Defeat shocking, must think about breach of trust in coalition: Shiv Sena