What India can tell Russia amid war

Radha Kumar writes: As Russian foreign minister Sergey Lavrov comes to Delhi, there are many talking points and some tough questions 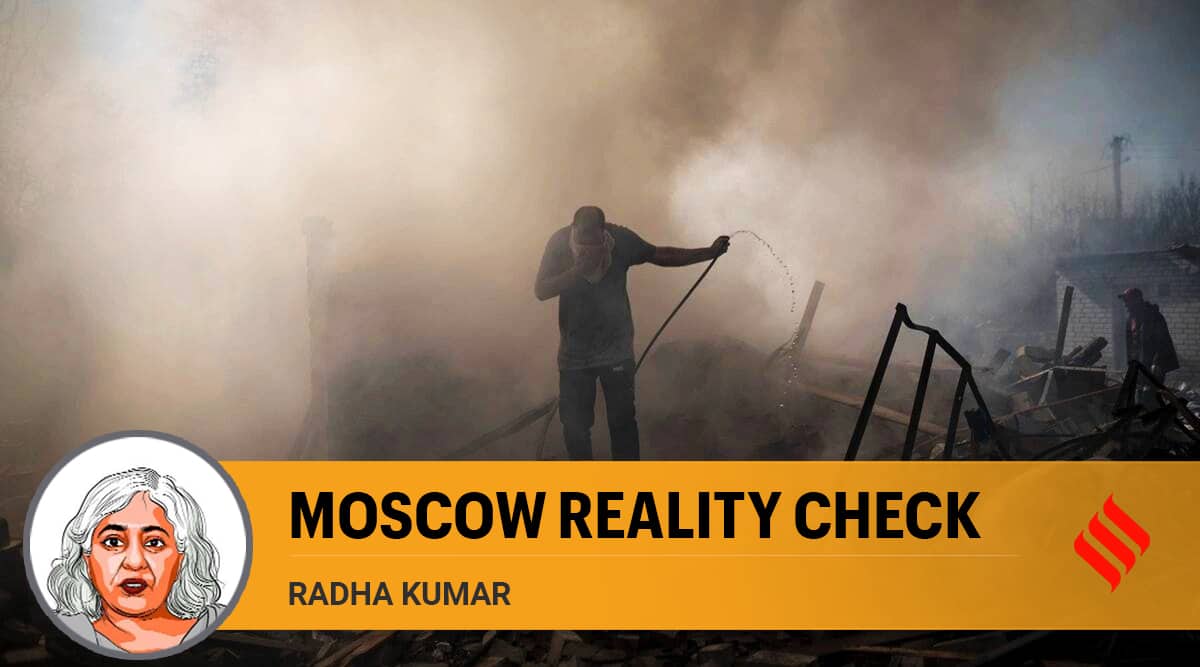 Ukrainians try to extinguish the fire of a house, destroyed after a Russian attack in Kharkiv, Ukraine. (AP Photo)

The Indian media, especially op-ed writers, have been surprisingly quiet on the planned visit of Russian Foreign Minister Sergey Lavrov. Less surprisingly, the ministry of external affairs has been equally quiet. Yet, a visit by Russia’s top diplomat at a time when the country is at war is surely worthy of comment and more, serious questions.

What will Foreign Minister S Jaishankar discuss with Lavrov? According to the little information that is trickling out, the war on Ukraine is not the only issue on the agenda. Apparently, it includes Indian defence purchases as well as revitalising the rupee-rouble account.

To discuss arms purchases from a country while it bombs civilians and infrastructure in another country is surely a violation of even the low bottom line our leadership seems to have set. After prolonged silence, the Modi administration inched towards asserting support for sovereignty, territorial integrity and an immediate ceasefire in Ukraine. These principles, then, should top Jaishankar’s agenda with Lavrov.

As I write, Russia-Ukraine talks have resumed in Istanbul. There have been some breakthroughs, but the chasms remain vast. Russian troops have halted their advance on Kiev and Chernihiv and the defence ministry has announced that it will “radically reduce” military activity around those two cities as a “confidence-building measure”. There is progress on a treaty between the two countries covering all points of dispute, that will include international guarantors.

However, these are only very preliminary breakthroughs. Though Ukraine had given up its nuclear arsenal in return for security guarantees in 1995, Russia was able to annex Crimea in 2014 and launch its current assault. This time, Ukraine wants legally binding guarantees under the Vienna treaty, and for guarantors to include NATO members. Russia may have reconfigured its war aims to the “liberation” of the Donbas region, but that still entails prolonging the war. The talks process will take time and in the meantime Ukrainian civilians and troops on both sides continue to die.

It is in this context that Lavrov is visiting India. Quiet whispers have been doing the rounds that India can play the role of a mediator, but does the Modi administration have the political will to do so? Stressing a return to diplomacy is redundant when negotiations are already taking place. Urging a temporary ceasefire will certainly serve the immediate purposes of evacuation, especially from areas such as Mariupol, and the provision of sorely needed humanitarian aid. But it will also allow troops to regroup and re-provision, and may well prolong the war further.

For a time-bound ceasefire to be meaningful, it needs to be in force for the duration of negotiations. Our political and military strategists, including those in the Opposition, know well that no sustainable peace can be arrived at while one side tries to militarily force the other to acquiesce in its goals. That should surely be the first point for Jaishankar to delicately convey to Lavrov, along with a clear if equally delicate message that India cannot negotiate defence purchases until Putin ends his war.

This suggestion is not as outre as it sounds. The Russian Defence Ministry’s declaration that the country has achieved a major war aim, to degrade the Ukrainian military, indicates Russia is looking for face-saving ways to de-escalate. If so, Putin could accept President Volodymyr Zelensky’s offers to relinquish the aim of joining NATO, agree to Ukrainian neutrality and negotiate a resolution to the annexation of Crimea over a 15-year period. These are, of course, broad-brush offers; the devil will lie in the details. But they give President Putin the opportunity to announce a full ceasefire while claiming that other war aims have been, or are being, achieved through negotiation.

That is a point that Jaishankar can put to Lavrov, who is presumably well aware that the sooner this war ends, the better it will be for Russia. Will Putin listen? Highly unlikely. But that should not prevent us from discussing these or other suggestions. Successive Indian administrations have made it clear that India has no interest in isolating Russia, as has the Modi administration, and that should be a sufficient sugar-coat. If Putin chooses to ignore Zelensky’s concessions, it will be clear that his irredentist ambitions supersede the interests of his people, allies or friends.

Critics will immediately argue, incontrovertibly, that what I suggest will leave our army severely strapped. But it could equally well be argued that making arms purchases conditional on ending the war might add pressure without prejudicing the army’s need. After all, Russia is not doing us any favours by selling us arms. If a promise to follow through on existing purchase agreements helps bring about a full ceasefire, then it is worth considering. Otherwise it is not.

As Putin’s war has progressed, a number of tired not-so-true truisms have been dredged up about what a reliable defence partner Russia is. But dependability has been in short supply since Putin came to power. His administration has delayed deliveries, ratcheted up prices and excluded India from areas of key security concern, such as Afghanistan under the Taliban and access to central Asia. It has chosen China over India on every issue.

This a rare moment of confluence for India’s moral and strategic interests. With all eyes on it, China will not pursue its salami-slicing along our borders for a while. That gives us a little breathing space to diversify arms supplies. Which will better spur India’s military modernisation: Continued dependence on Russian weaponry or strengthening security partnerships through the Quad and perhaps Europe? Our air force has already indicated preference for Rafale over MIG. Our navy has pioneered diversification, with lessons for our army. Are we really prepared to let extremely short-term interests narrow our military options? Can we possibly believe that our Quad partners or Europe will be as open to our needs as they might be, if we buy from a Russia that violates every rule of international law, not to mention our own principles?

There is a longer-term issue that should concern us too. Russia’s adventurism could well revive old Cold War estrangements that we only recently stepped out of. But that is a subject for another article.

This column first appeared in the print edition on March 31, 2022 under the title ‘Moscow reality check’. Radha Kumar is a writer and policy analyst

Police start training for volunteers to prevent crime against women