Both these elections have taught many lessons, opened opportunities and posed challenges for left-progressive and secular forces all over the world, especially in India. These two elections exposed the views expressed by many ideologues about the end of ideology and ideology-based politics. 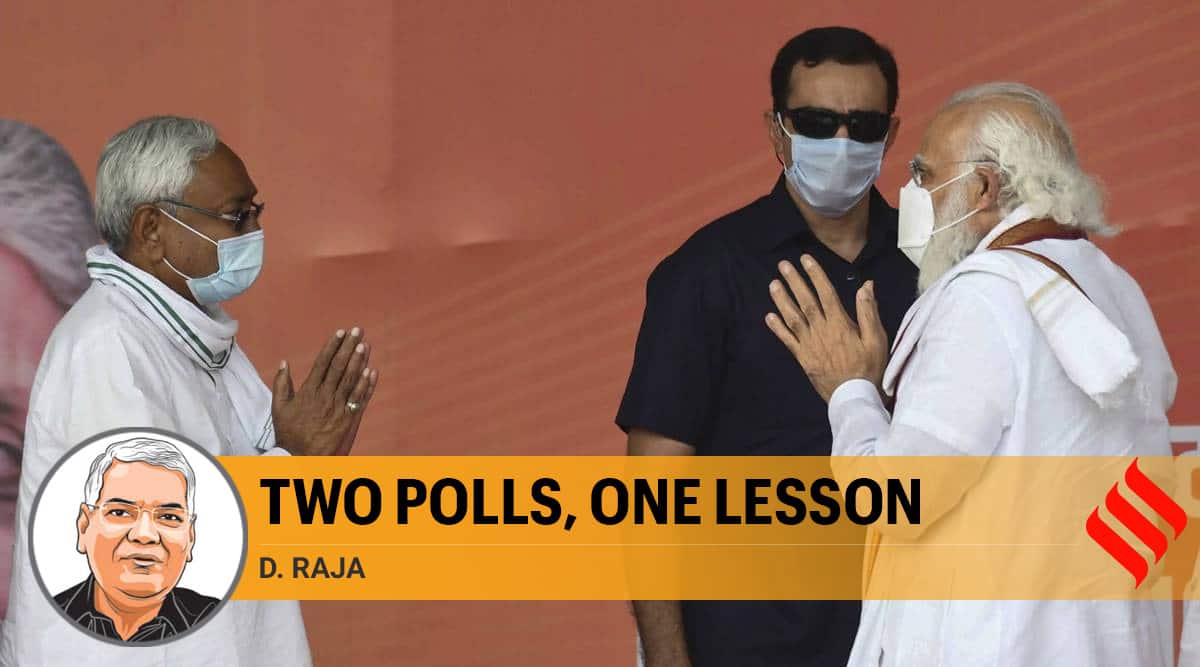 We just witnessed two election results. One was the defeat of the blatantly anti-people, racist, right-wing, authoritarian Donald Trump in the US presidential elections by Democrat Joe Biden. This should send a message to all right-wing parties and leaders who try to divide people based on race, religion and community to capture power.

In Bihar, a coalition of secular, democratic forces almost defeated the communal, venom-spewing Hindutva machinery of the RSS-BJP combine and their alliance partner, the Janata Dal (United). The NDA has managed to form the government using all the resources at its command, making Nitish Kumar — who had announced that he would hang up his boots after the 2020 elections — the chief minister. Both these elections have taught many lessons, opened opportunities and posed challenges for left-progressive and secular forces all over the world, especially in India. These two elections exposed the views expressed by many ideologues about the end of ideology and ideology-based politics.

What was remarkable about the US election was the mobilisation of left-progressive voters by Bernie Sanders, which helped Biden capture the presidency through victories in key states like Michigan and Georgia. In India, the left proved its mettle by winning 16 out of the 29 seats it was allotted as a part of the Mahagathbandhan in Bihar. As many observers have pointed out, the seat share of the left was much less than its strength on the ground. Still, the CPI, CPM and CPI (ML) joined the Mahagathbandhan because of the grave danger of the RSS-BJP claiming power. The left stood firmly with secular-democratic forces.

Trump’s presidency created much havoc domestically and internationally and divided the US along racial and class lines. Biden and his programmes will be closely monitored by the leftists like Sanders and Alexandria Ocasio-Cortez within the Democratic Party. The world hopes now for a US that works towards a more stable international order for the common good of all nations and a pro-people administration domestically.

Opinion | Bihar elections: Rupture of a coalition of extremes

The left’s programme in India has been to be the voice of the voiceless. It is certain that ever since the RSS-BJP combine captured the high office in India, the left has been uncompromisingly opposing all their divisive, anti-people policies and moves and has provided leadership to popular movements. Be it the discrimination against the Dalits and women, presenting one community as anti-national or the anti-farmers, anti-worker, anti-student policies of the government, the left has tried to galvanise popular protests against the right-wing communal forces. It was these movements that resulted in the spectacular electoral performance of the left in Bihar.

These victories have enhanced the people’s expectations from the left. Biden’s victory and the impressive performance of the Mahagathbandhan have shown that the rise of right-wing forces throughout the globe since the financial meltdown of 2008 can be halted if progressive forces come together. However, with Trump giving a tough fight to Biden and the BJP emerging as a major force in Bihar, there is much work to be done by progressive forces to undo the polarisation on communal, caste and racial lines.

In India, the pro-corporate BJP, by getting many more seats than its alliance partners, will now claim to be a pan-Indian party. However, it is clear that the BJP intends to convert the Indian republic into a Hindutva Rashtra. It has already created divides between religions, castes, states and regions.

The left, after gaining significant seats and vote share in Bihar, should focus on creating a larger unity of secular-democratic forces. Not only in Bihar but across the country, regional and national-level secular and democratic parties must introspect seriously concerning their ideological, political positions. They cannot afford to take right or right-of-centre positions. Even if they do not take left-of-centre positions, they should remain centrist at least. They also should introspect on their positions on the neo-liberal economic policies which have brought the country to the present disastrous position and have pushed the economy into a recession.

The left, independently and along with other secular-democratic forces, should intensify the struggles against the destitution brought on by those ruling with a disastrous agenda. The left must bring together and galvanise popular movements against the anti-people and polarising policies of the BJP. The left should be the binding element of what is democratic, secular and pro-people in the Indian political and social arena by rising against class, caste and gender-based discrimination with more vigour and sensitivity.

This article first appeared in the print edition on November 20, 2020 under the title ‘Two polls, one lesson’. The writer is general secretary, CPI.