As governments push back against big tech, a new challenge presents itself — reining in the growing power of the state in the digital age. 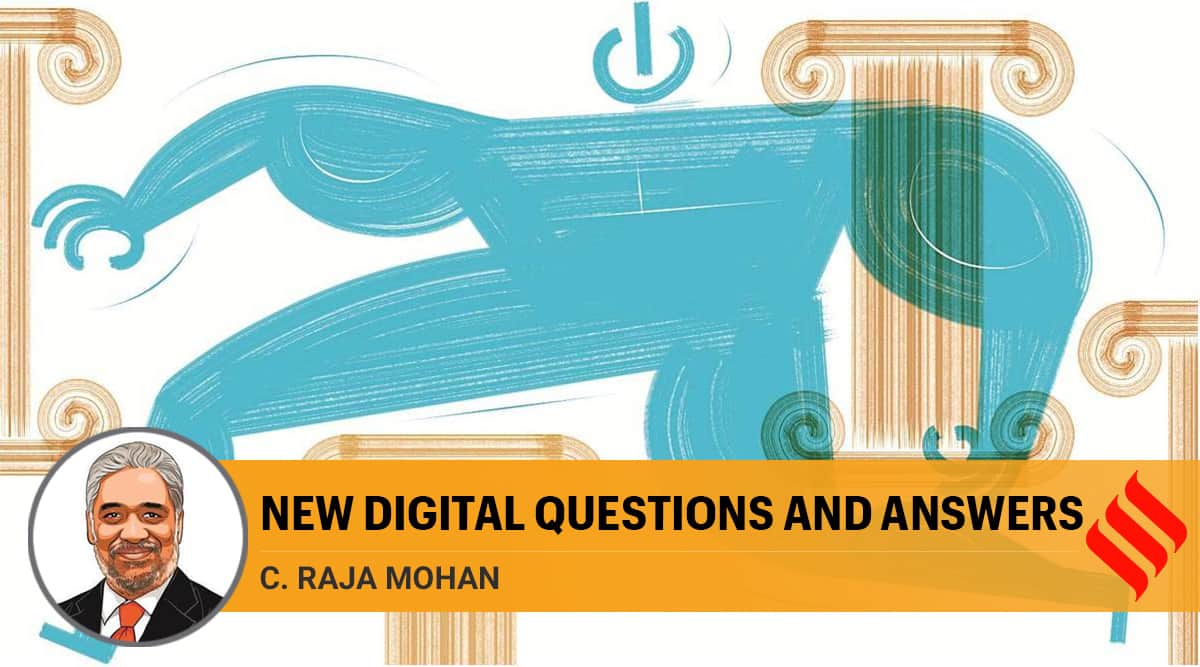 The promised utopia of a digital domain free from the states and borders was always a chimaera. (Illustration by C R Sasikumar)

India’s recent skirmish with Twitter is not an isolated case where a government has locked horns with US tech giants that have acquired a larger-than-life presence across the world. Nowhere have the arguments on big tech been more intense than in the US, where the last two general elections in 2016 and 2020 have seen strong charges of political manipulation by social media companies.

The story is not just about the oversized role of social media companies in elections. It envelops a range of domestic and international issues including the concentration of economic power, individual rights against the state as well as the corporation, disinformation, the rise of digital geopolitics, and global digital governance.

While China has come up with clear answers, for good or bad, to the new digital questions, liberal societies around the world are struggling to address the challenges to democratic forms of governance that emerged with the modern industrial society.

No one country or corporation in the free world can credibly preach to others on the right path to digital salvation. Democratic forces need to consult each other and collaborate in developing new norms for managing the digital world.

In the US, both the left and right are demanding that digital behemoths like Amazon, Google, Facebook and Twitter are brought under greater control if not broken up. The US has had a long political tradition of breaking monopolies going back to the progressive politics at the turn of the 20th century that targeted the concentration of power in the oil, rail road, and steel industries. In December, the US government filed a lawsuit against Facebook for anti-competitive practices in more than 40 states. Google and Amazon are also under legal scrutiny.

The current digital giants, however, are not easily amenable to political attack. They are bigger than the biggest we have known. They donate massively to political campaigns in the US and have an enormous influence on the legislative process in Washington. That makes the domestic battles against big tech in the US that much more interesting.

As the US takes a close look at the anti-competitive practices of the tech giants, Europe is not far behind. Last December, the European Commission proposed new rules to promote competition and fairness in digital markets. The EU is likely to approve a Digital Markets Act next year.

The war is playing out in multiple other theatres. In Australia, the government is staring down a threat from Google to shut a developed nation of 25 million people out of its popular search engine. The provocation? Canberra has decreed that Google must work out an arrangement with Australian newspapers to pay for the use of their content.

Google worries, rightly, that this will set a precedent for other governments and will undermine its revenues. Many governments in the developed world are cheering for Canberra. So is Microsoft, which is offering its Bing search engine as a more sensible alternative to Australia.

For more than two decades, governments across the world were happy to buy into the claim that the tech companies will lead us to a world of innovation and plenty. Legal and financial concessions from governments at various levels allowed tech companies to rapidly gain ground and commercial muscle and dominate people’s lives. But governments are now questioning the sharp business practices of the tech giants.

Let us highlight three issues here — labour rights, taxes and politics. While the tech giants have created a lot of new wealth, some of them have sharply squeezed the labour. Amazon is the most notorious. There are new efforts to unionise Amazon employees, but the company has been good at crushing these challenges in the past. In California, trade unions are battling against the success of Uber and Lyft to turn employees into “contract workers” to deny them multiple benefits.

Digital giants have been aggressive tax evaders. But Caesar is demanding his due now. Joe Biden, who has outlined a progressive platform, has promised to get big tech to pay their share of taxes in the US. His Treasury Secretary Janet Yellen is under pressure from America’s G-7 partners to work out the rules for taxes on US digital giants operating in other geographies.

On the political front, when Twitter and Facebook shut down President Donald Trump’s accounts, there was celebration among liberals. But social media companies are unlikely to always find themselves on the winning side in other democracies. The context and issues are inevitably different and applying the same tactics against political targets will backfire, as Twitter discovered in Delhi.

If India raised Twitter’s differential treatment of the riots in Washington and Delhi, European leaders raised important questions about social media’s actions against Trump. German Chancellor Angela Merkel spoke for many Europeans when she called it “problematic”.

The European Commissioner for internal markets, Thierry Breton, expanded on the issues involved. “The fact that a CEO can pull the plug” on an elected President of the world’s most powerful nation “without any checks and balances” “displays deep weaknesses in the way our society is organised in the digital space,” he warned.

The answer, Breton insists, lies in laying down a clear set of obligations and responsibilities for the digital giants; he promises that the EU’s proposed Digital Services Act will do that. The moves in Brussels are in part about restoring the primacy of elected governments. They are also about building “digital sovereignty” that will let Europe make its own choices based on its own values.

Even as it claims digital sovereignty, Europe has offered to open talks with the Biden administration on the full range of digital issues that have emerged. The idea that the world’s democracies must get together to discuss global digital governance is gaining ground. Delhi is likely to be part of some of the initial conversations.

The promised utopia of a digital domain free from states and borders was always a chimaera. The digital holiday is over and the state is back. States, at least the strong ones, whether authoritarian or democratic, were not simply going to cede their right to govern to technology companies.

Reports that Twitter, after some initial defiance, has complied with much of the Indian government’s demands, points to an easily forgotten reality. Twitter, like all other big tech companies, is a commercial beast and will live or die by its bottom line. Large states have the power to change that calculus.

As governments push back against big tech, a new challenge presents itself — reining in the growing power of the state in the digital age. The answer lies in democracies modernising their laws to protect freedoms in the era of technological transformation. Twitter is of little help in this urgent but demanding domestic political battle.

This article first appeared in the print edition on February 16, 2021 under the title ‘New digital question and answers’. The writer is director, Institute of South Asian Studies, National University of Singapore and contributing editor on international affairs for The Indian Express