Recounting the personal history of Jawaharlal Nehru is not enough. He is better celebrated by taking forward his vision of swaraj Jawaharlal Nehru’s birth anniversary gives all those who believe in the swaraj that Gandhi and Nehru took forward from their predecessors and alternatives, an opportunity to recall and revitalise swaraj’s pledges.

Daughters are said to be very close to their fathers. Not discounting that belief, I think, in that daughter Kasturba Gandhi would have had an understanding ally. Prabha, as I might name that imaginary daughter, would have far more effectively, than her mother, been a bridge between the father and his rebellious son Harilal, a much-needed wall between her father and the many inconsiderate disciples who took up an inordinate amount of his time, seeking advice on utterly trivial matters; would have, I think, persuaded him against at least half a dozen of his fasts and above all, put her foot down against his experiments in brahmacharya. Would Prabha have entered her father’s political programmes — in other words, politics? I doubt it. I think she would have laughed off the suggestion. Would she have had an “arranged” marriage? Again, I think not. Having been dissuaded by her father from an early marriage, I think she would have found her own man in someone like Jayaprakash Narayan or Ram Manohar Lohia.

An only daughter of Gandhi, surviving him by many years, decades perhaps, she would have been a figure to reckon with.

Sons of the famous and the powerful are known to be anti-climactically boring. Not devaluing that notion, I think in that son Jawaharlal Nehru would have faced his biggest challenge. If, in keeping with family tradition, the son had to have “lal” ending his name, he could have been named Hiralal. If older than Indira, he would have been seen as Jawaharlal’s natural heir and successor in all that the father was doing. Would he have had it in him to be and to do that? Who can tell? He would most definitely have joined politics and would have exercised a large measure of influence on the father, encouraging him to be closer to the Mahatma and less to theoretical influences from the history of other lands. I believe he would have been an open idealist, not the inscrutable pragmatist that his sister became. He would have been something of a Dara Shikoh to the Shah Jahan in his father. He would have married, of course, a flaming revolutionary, I think, a younger version of Aruna Asaf Ali or Kalpana Joshi.

An only son of Nehru, surviving him he may have been expected to become prime minister but, I would like to imagine, he would have spurned that allure to be the nation’s tribune. And I think Gandhi’s sons would have become even more obscure than they have been, and Indira Nehru would have had a very different, perhaps happier, personal life.

But let me, at this point, inform the reader that this imaginary daughter and son are not wholly imaginary. Kasturba did have a child born to her before Harilal, and while there is no record — unbelievably — to tell us whether “it” was a son or a daughter, there is a chance (and a belief in many who have studied the Mahatma’s writings) that the “balak” he writes of was a girl who died within days of her birth. And it is a recorded fact that Kamala Nehru gave birth to a son who did not survive before Indira was born.

Prabha and Hiralal are more real than we may think. And they would have had a more real sense of the nation’s evolving chemistry than even their insightful fathers. So?

At a time when Mahatma Gandhi’s and Jawaharlal Nehru’s political philosophy, their vision for India, their sense of India’s duties to itself and to the world are being either belittled or denigrated, I would like to imagine what a Prabha Gandhi and a Hiralal Nehru would have had to say or do.

First, Gandhi and Nehru did not belong to their families alone. They brought extraordinary energies to the Congress and to the freedom struggle — but as part of those dynamisms, joining others that went before them, who were as great if not in many ways even greater than them, certainly no less pioneering or innovative.

Second, history does not belong to dynasties, howsoever stunning the roles of individuals in those lines. “Gandhi” and “Nehru” should not be conflated with bloodlines but with timelines, which usher in eras not lineages, epochs not estates, and men who were passionate about India have to be supported with a sense of passion, not of possession.

Third, their task — the greatness of India in freedom and justice — faces its biggest challenge today. A narrow and dangerous bigotry is exploiting our innate pride of nation and reversing the larger gains of the struggle that lay in the idea of a republic of India, not in a revivalist recoil to all that kept us backward in thought, regressive in action and wholly unregenerate in vision.

Jawaharlal Nehru’s birth anniversary gives all those who believe in the swaraj that Gandhi and Nehru took forward from their predecessors and alternatives, Dadabhai Naoroji, Bal Gangadhar Tilak and Gopal Krishna Gokhale foremost among them, an opportunity to recall and revitalise swaraj’s pledges. That swaraj is at the heart of the Preamble to the Constitution, where “we the people” give ourselves, very specifically, the freedoms of thought, expression, belief, faith and worship. In Sanskrit, the phrase is “vicharasya abhivaktaye asthaha, dharmasya upasanayascha swatantrata”. In that form it reads like a powerful injunction. Hindutva cannot ignore it. And in Urdu, it is “azadi, fikr, izhaar, aqide, deen aur ibadat ki”.

It is this freedom, this swatantrata, this azadi that the struggle for freedom was about and it is that which is at stake today.
Nehru’s birth anniversary is therefore not about one man’s chronology, but about one movement’s ideology. And everyone who believes in that movement and ideology is a Prabha and a Hiralal, the non-real yet more than real descendants of those two men.

The writer is a former governor of West Bengal 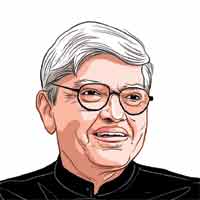