Paramjyoti Chattopadhyay, Priyanka Dua write: A targeted and cluster-based approach can be undertaken by identifying districts with a higher number of stubble burning incidents 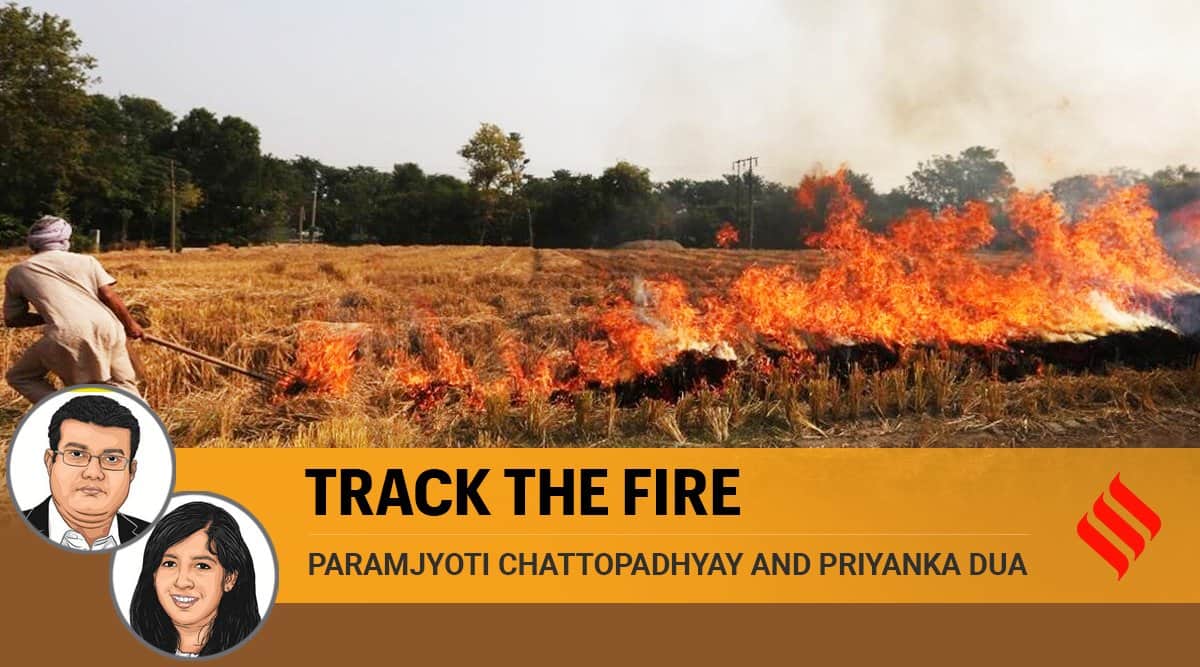 Every October and November, parts of north India are engulfed by a dense fog. This is the time when stubble burning takes in farms of the region, especially in Punjab, Haryana and Uttar Pradesh. Farmers resort to the practice due to the limited time they have between the harvesting of kharif paddy and sowing of the rabi wheat. They find burning the stubble left in the field to be a cost-effective and quick way to resolve the issue. Studies have shown that besides causing pollution, stubble burning reduces soil fertility in the long run.

In 2014, the Ministry of Agriculture and Farmers Welfare developed a National Policy for the Management of Crop Residue. In 2015, the National Green Tribunal banned stubble burning in Rajasthan, Uttar Pradesh, Delhi, Haryana and Punjab. The enforcement of the ban has, however, been weak, largely due to inadequate political will. Stubble burning was considered an offence under Section 188 of the Indian Penal Code and in the Air and Pollution Control Act, 1981. However, it has now been decriminalised as per a recent government announcement.

The Central Scheme on Promotion of Agricultural Mechanisation for In-Situ Management of Crop Residue was introduced in 2018-19. The Ministry of Power has pitched in this effort by making biomass pellets mandatory in some coal-fired thermal power plants that would utilise the agricultural waste usually burnt by farmers. Some state governments have also taken measures to reduce stubble burning.

As a result of these efforts, the number of crop residue burning events declined from 2016 to 2019. The pace of decline has, however, been slow. Moreover, 2020 saw a sharp increase in stubble burning, especially in Punjab and Madhya Pradesh. This year satellite data did show an almost 50 per cent decline in the number of stubble burning events in Punjab, Haryana and UP in October. However, after including burning events till November 21, the decline reduced to about 8 per cent. Experts suggest that the respite in October was temporary as the initial decline can be attributed to the delayed withdrawal of monsoon. The trend reversal is also evident from recent data as the three states recorded 5,728 stubble burning events on November 5 — more than the highest single-day events recorded in 2020.

It is thus evident that despite various government initiatives, substantial stubble burning continues in several states. Over 1.5 lakh crop residue management machineries have been supplied to farmers and custom hiring centres between 2018-19 to 2020-21. However, reports suggest low utilisation as farmers perceive the purchase or rent of such machineries to be an additional expense. A recent study by J-PAL, South Asia found that farmers prefer ex-situ management of crop residue through equipment such as balers as opposed to in-situ machinery.

To ease farmers’ financial burden, the government could consider subsidising operational costs along with providing farmers a capital subsidy on such equipment. This, along with monetary incentives for not burning stubble, may encourage zero burning practices.

Ex-situ management of crop residue can also be explored under the schemes covering products such as bales and pellets for biomass power generation and supplementary feedstock in coal-fired power plants. Awareness generation and trust building exercises should be undertaken with the support of local civil society organisations.

Stubble burning is fairly concentrated in regions within states. A targeted and cluster-based approach can be undertaken by identifying districts with a higher number of stubble burning incidents. Central and state government interventions can then be concentrated in these districts. The states covered under the Central schemes should also be reassessed as Madhya Pradesh, which accounted for the second highest number of stubble burning incidents in the country last year, remains uncovered under the scheme.

To make these interventions effective, there is a requirement for formulating a robust monitoring system at the local level to track the progress of different activities under the schemes along with ascertaining the number and intensity of crop residue burning incidents. Beneficiary farmers who continue to burn stubble in spite of availing scheme benefits can be warned about the potential exclusion from the schemes and agricultural credit subsidy. This would require a dynamic monitoring system, which maps stubble burning events to beneficiaries of the schemes. A combination of these measures can complement the existing initiatives to encourage farmers to adopt zero stubble burning practices.