Only a legends death or a cyclone can divert the media from political campaigns.

TV is obsessed with the endless NaMo-RaGa tournament,and more taken with the former than the latter. Its been like that from Modis speech at the Shri Ram College of Commerce in February,where the media,in a deep hypnotic spell,transmogrified a student body address into a campaign kickoff. And its turning into a regular mania now. Yesterday,ABP TV provided a ball-by-ball commentary of Modi and Rajnath Singhs rally at Jhansi. Even before he arrived,the ticker was counting down: Narendra Modi will be here soon,Rajnath to speak in 10 minutes,and more in that vein. With the media providing so much promotional space,who needs a campaign?

It takes something fairly momentous to divert the camera from this free show. This week,sadly,it was the passing of Manna Dey. Earlier,a cyclone and the gold rush in Unnao had performed this public service. Speaking of which,I am compelled to abandon my earlier stand on Shobhan Sarkar,the babaji whose gilded dream is turning into a nightmare with cases being filed against him. While he should not have promoted superstition and wasted the time and resources of the government and hapless archaeologists,a man who can rattle Modi,the medias candidate,by using the media itself,will bear watching.

And,of course,there was the elephant in the room which the privately owned channels studiously ignored. It was left to Rajya Sabha TV to tell the world about the media story which was setting Twitter afire  the change of guard at The Hindu as the Kasturi family resumed control,abruptly terminating a 20-month experiment with professional journalistic management. RSTVs Big Picture had four media professionals on the panel  S Nihal Singh,Rahul Dev,Paranjoy Guha Thakurta and Dilip Cherian. While RSTV is charting an interesting independent course,neither boringly sarkari nor obnoxiously shrill like privately owned channels,it often drops a clue to let you know that finally,it is government. In this case,each panellist had his professional description preceded by the words senior or veteran. Words which became irrelevant about the time when Zanjeer,Nixon and The Dark Side of the Moon were big hits.

Girish Nikam started Big Picture on the slightly misleading premise that newspaper owners and professional editors constitute an oppositional binary. The revisionist drama on at The Hindu does suggest that but as Nihal Singh pointed out,there is such a thing as a credible owner-editor. Rahul Dev was presumably included to disparage Indian language media,where some mastheads are indeed regarded as ancestral property,irrespective of the professional abilities of their owners.

Meanwhile,the fight for Delhi continued with Zee TV ominously reporting that neither Sheila Dikshit nor KV Thomas knew their onions. And then it dived into ordinary homes with regal kitchens,for the Great Onion has appeared there. Its been running this tamasha for two weeks and now,for variety,it hunted down housewives who confessed to being unable to cook without onions. One said that she was reduced to using just one onion in a sabzi for which,in earlier,plusher times,she had used five or six. Incredible,the dietary compulsions of north India! Now,even the English channels are on the prowl and its become hard to reach a vegetable stall without having to shove an OB van out of the way.

And hard to find a news channel which is not mad about the NaMo-RaGa tournament. Sadly,they stop short of asking the burning question. Now that Rahulji has moved on from childhood memories and family saga to a blockbuster conspiracy theory,is he campaigning against or for Narendraji? 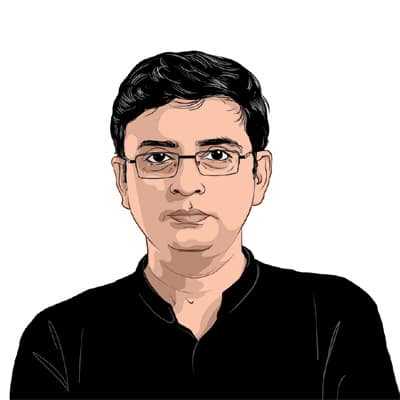