From LTTE to Taliban and Indias Maoists,militant groups in South Asia want self-rule rather than state capture

From one end of South Asia to another,armies are dislodging militant outfits from territories they had occupied and governed as non-states. Whether it is the Taliban in Pakistan or the LTTE in Sri Lanka,these groups share a great deal in the way of tactics as well as identity,for while one is normally seen as religious and the other ethnic,in fact such descriptions can easily be reversed. After all the LTTE,made up of Hindus and Christians primarily,is opposed by a state that has increasingly given a Buddhist colouring to its nationalism,thus forcing upon its enemies a religious identity they otherwise refuse. Similarly the Taliban can be seen by its local enemies to be an essentially Pathan movement. As for tactics,we know that suicide bombing had its origins among the Tamil Tigers,before it was taken up elsewhere in the region and indeed around the globe,all of which makes it difficult to fix these outfits each in its own peculiar ideology or politics.

India provides us with yet another form in which non-state governance occurs,that of a Maoist insurgency among peasants and tribal peoples in the countryside. It is this new model of governance,rather than of government properly speaking,that links such outfits while distinguishing them from terrorists,even those in the service of separatism for places like Punjab in the 80s and Kashmir in the 90s. It is true of course that all of these groups hold techniques of global mobilisation in common,even the Maoists with their ideological references to Nepal and China,but what is interesting about the LTTE,Taliban and Maoists is the fact that they tend increasingly to distance themselves from the old separatist aim of independence. Just as distant,however,are traditional aims like regional autonomy or equality within the existing order,for what we see in their modes of governance is not the pretence of an alternative state so much as the myth of a self-administered civil society.

Obsessed with the received narrative of coups,revolutions and the capture of states,policy as well as media debate has focussed on preventing or encouraging regime change of one kind or another,thus making all insurgencies into would-be governments. Given the history of the Taliban state in Afghanistan or the Maoist takeover of Nepal,this account is not surprising,though it assumes that not much about militancy has changed since these events. And yet neither of these regimes came to power in a revolution,but rather as a consequence of negotiation and power sharing,and for the Taliban at least the conquest of the state never played an important ideological role. Indeed once in power they were content to delegate governance and turn it into a vicious form of self-administration along tribal and other patriarchal lines. If anything the Taliban believed in a minimal state,one pared down to a mechanism guaranteeing order and maintaining infrastructure.

Unlike the revolutionary and ideological states of old,including religious ones like Iran,the language shared by regimes like yesterdays Taliban and todays insurgencies is not the nationalist one of freedom but rather justice as a form of governance within civil society. As if taking a leaf out of the NGO handbook,contemporary militants in particular are much concerned with self-administration and the provision of services by non-state actors,services that had often been delivered by ideological states in the past. With the Taliban (today a relatively meaningless and catch-all term) in Swat,like Indian Maoists,this service consists of swift justice,and for the paranoid politics of LTTE it consisted of security,while for evolving terrorist groups like the Lashkar-e-Taiba it is coming to mean education,health and shelter. Many of these groups,after all,do not include capturing the state as part of their ideological platform,but creating multiple jurisdictions within such states,themselves reduced to skeletons of coordination and infrastructure. Are such entities states within states or violent non-governmental movements,funding their governance not by taxes but donations and a trade in drugs based upon micro-credit loans to poppy growers?

When they do capture states,as the Afghan Taliban were alone in doing,these outfits find it difficult to turn themselves into governments and,like the Communists of old,insist on retaining their autonomy even within a state they hold. Unlike political parties in democratic countries,however,these groups reduce the state itself to a mechanism of coordination and retain power in a non-governmental form. The Communist Party,however,only provides the origin for this sort of governance,which today has moved further from the state,even when it seems to control the latter. Lebanons Hezbollah offers perhaps the most sophisticated institutional and ideological example of such a movement,which it would be incorrect to describe merely as a state within a state. In fact it is a non-state actor carrying out many of the duties of the state,and even imitating it here and there.

But we need not go as far as Communist Eastern Europe or the Islamist Middle East to understand what is happening in South Asia across national,religious and ethnic lines. In this,the centenary year of Gandhis Hind Swaraj,we are entitled to trace the roots of self-administration to the struggle against colonialism. For what was the Mahatmas swaraj but self-rule conceived in a non-state form,one that did not even require national independence? The state,linked so closely to imperialism,has received much criticism in the past one hundred years. If Gandhi freed himself from its power in the most moral way,insurgents today represent such freedom in its greatest immorality. 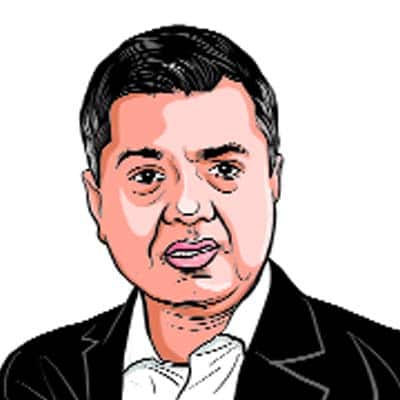