The ghost of Rafale appears

The Rafale deal will be exhumed. Until then, the ghost will haunt the government. 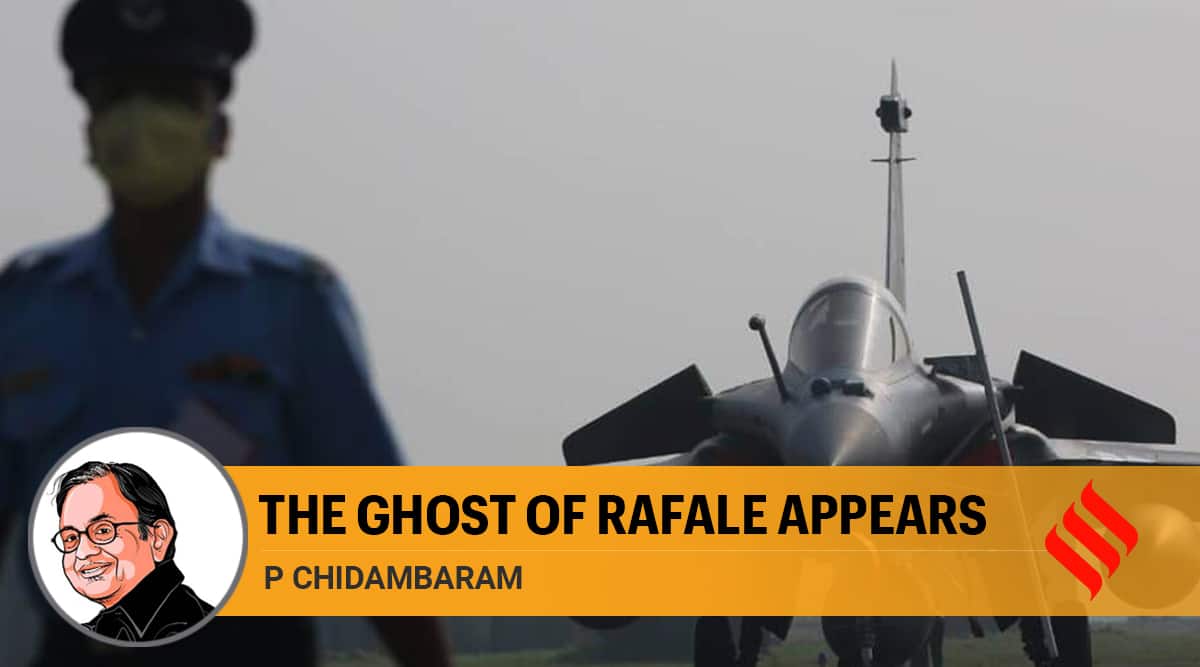 An Indian Air Force officer wearing a protective face mask at the Ambala Air Force Station before the induction ceremony of the five Rafale jets on September 10, 2020. (Express Photo by Tashi Tobgyal/File)

Memories are short. For ordinary people, living every day is a challenge. They are conscious of the larger challenges to the country and its governance, but cannot dwell on them for too long. They trust the institutions that they have installed to tackle these challenges including Parliament/Legislature, the judiciary, the free media, the CAG and the Opposition political parties. When these institutions fail — separately or collectively, because of incapacity or collusion or fear — the people just give up and move on. That is what happened in the Rafale aircraft case.

Four institutions had an opportunity to scrutinise the case. First, the media. There was enough material to raise a number of questions and demand answers. A major section of the media refused to raise these questions; on the contrary, many media organisations published handouts of the government as if they were authentic ‘news’. In this column, on October 7, 2018, I had raised 10 questions for the Finance Minister. Among them were:

1. Why was the MoU between India and France under which India would buy 126 Rafale twin-engine multi-role fighter aircraft cancelled and a decision taken to enter into a new agreement to buy only 36 aircraft?

2. Is it correct that the price per aircraft under the new agreement is Rs 1,670 crore (as disclosed by Dassault) as against the price of Rs 526.10 crore under the cancelled MoU?

3. If the first aircraft will be delivered in September 2019 (four years after the new agreement) and the last in 2022, how does the government justify the transaction as an ‘emergency purchase’?

4. Why was the agreement to transfer technology to HAL scrapped?

5. Did the government suggest any name as the offset partner and, if not, why did the government not suggest the name of HAL?
These and other questions have not been answered so far. The media, with the notable exception of a few, failed the country.
Second, the Supreme Court expressed its inability to probe vital questions in a petition under Article 32 of the Constitution. For instance, the Court declined to examine the issue of price or matters relating to technical suitability; the decision to buy only 36 aircraft instead of the 126 aircraft that were needed by the IAF; or the deviations from the established procedure of acquiring military equipment. The Court also accepted the contents of a note submitted by the government in a ‘sealed cover’ and in the ‘oral submissions’ of the government. The Court was misled into believing that there was a report of the CAG, when none had been placed before Parliament or the Court until that day. Hailing the judgment, the government claimed that its position had been vindicated when the truth was that vital issues had not been examined by the Court.

Third, Parliament was divided on party lines and failed to exercise parliamentary oversight into the actions of government. Parliament alone could have asked — and found the truth — why the transfer of technology and work share agreement dated March 13, 2014, between Dassault and HAL was abandoned when 95 per cent of the negotiations had been completed; if the price under the new agreement was 9-20 per cent cheaper, why was the offer of Dassault to sell 126 aircraft not accepted; and why did the government not push the case of HAL to be chosen as the offset partner? Parliamentary oversight was scuttled by the brute majority of the government.

Four, the most egregious failure was by the CAG. In a 33-page report, the CAG placed a dark shroud on the transaction and buried the facts of the case along with the truth. Unprecedented for the CAG, the authority conceded that the government had “strongly reiterated their stand for redaction of commercial details in MMRCA case on the grounds of security concerns”. Such forbearance — and deference — was not shown in the Bofors case or in any other case. As a result, pages 126 to 141 of the report made no sense to a person of average intelligence. In particular, Table 3 on page 131 and Table 4 on page 133 were just gibberish. Yet, the CAG was forced to reject the claim of the government that the new deal was cheaper (per aircraft) by 9 per cent. The CAG had a wider brief than any other authority but the independent constitutional authority miserably failed the country.

I may recall that the new agreement, unusually, waived the mandatory anti-corruption clauses, namely, clauses on no undue influence, no agency, access to books of account and integrity pact. Was there a hidden purpose behind that waiver? We don’t know, but the absent clauses have come back to haunt the government. A French media organisation, Mediapart, has, in a three-part investigation found that France’s Agence Francaise Anticorruption (AFA) had found evidence that Dassault had agreed to pay one million euros to a known middleman who is under investigation in India in connection with another defence deal, and actually paid € 508,925 to an Indian company, Defsys Solutions. The Mediapart story also revealed that French and Indian investigators discovered a great deal of compromising information but “the affair was buried in both countries”.

This is as specific as an allegation can be. The Rafale deal will be exhumed. Until then, the ghost will haunt the government.