Over The Barrel: The fourth political revolution?

A new political model is needed that is more responsive to changes being wrought by forces of globalisation, technology, humanity. The concern I write about is not limited to the public of India. It’s felt by people across the world. Hence, the protest votes that have dissolved the traditional political dichotomies of Left-Right

My last piece for these columns was titled, ‘New era, old budget’ (IE, February 5). It was centred around the budget but the underlying purpose was to draw attention to the chasm between the demands of society, arising from the revolutionary and disruptive changes taking place around the world, and the nature and capability of our political processes and institutions to meet these demands. I used the metaphor of energy to highlight the dissonance between the technological, economic, social and demographic forces driving these changes and the language, style, and content of the finance minister’s budget speech. To emphasise the broader remit of my message, I concluded the article by saying: “I support the idea of holding simultaneous elections for the state assemblies and the Lok Sabha, even though it is conceptually flawed because it is a new idea. We need thinking that compels the development of new political, social, and economic models.”

My purpose was to suggest that this chasm could not be bridged by our existing models and we need to look for solutions outside the existing system. In hindsight, I realise it was presumptuous to assume that readers would pick up this larger point from my concluding aside. Most did not and criticised me for endorsing what they saw as an opportunistic electoral tweak. This article is to explain further the reasons for my suggestion.

I am not a political scientist and I know I am treading on thin ice in writing about a subject that lies beyond my expertise. I do so, nonetheless, because I am concerned at the erosion of our institutions and the deepening disconnect between public interest and governance. I believe this erosion and disconnect cannot be addressed by looking for solutions from within the existing system. There are systemic factors that influence and limit political behaviour and choices. We need to consider “out-of-box” alternatives. We should encourage initiatives that compel constructive contemplation of such alternatives and not throttle discussion with the argument that the suggestion is infeasible or imperfect.

A scan of our institutional fabric explains my concern (I dare say of most citizens). Delhi’s chief secretary is allegedly manhandled by elected officials of the Delhi Assembly; a relatively junior bank official connives with businessmen (and possibly others) to circumvent established procedures and the oversight of external and internal auditors to dig a $2 billion hole (we are still counting) in his bank’s balance sheet; the judges of our Supreme Court — a highly respected and collegial body — acknowledge they are factionalised; the majority of our print and TV media have given up all pretence of independence.

One does not have to be a political theorist to wonder how in the face of the collapsing state of these pillars of our governing structure, we can expect the government to tackle the challenges of the emergent new world. Nor to ask the consequential questions. Is it realistic — or even fair — to expect our elected leaders to deliver on the promises they make on their election trail? After all, they are continually electioneering and given the size of their constituencies and the cost of fighting an election, they cannot discard their dependence on “financiers”. How can we expect leaders whose success has been achieved within a system framed by the straitjacket of nationalism and national politics, and whose continuation in power depends on appealing to narrow ascriptive identities, to be responsive to the global challenges of climate change, terrorism, migration or religious sectarianism? Most importantly, how can our democracy reconcile the opportunities and threats of globalisation with the pressures of individual expectations?

I supported the “idea” of simultaneous elections for the Lok Sabha and the state assemblies not because it provides an answer to these questions but because it offered the prospect of starting a debate on these systemic issues. We need to start a constructive dialogue on how to buck the status quo and not close the door on such a process simply because the initial thoughts are prima facie flawed or infeasible. Or because of intellectual inertia. Newspapers report that the government is thinking of appointing a regulator to oversee the public sector banking system. Will that excise the rot? Most unlikely, for the problem is not lack of regulatory oversight. It is the structure and ownership of the public sector banks. The decision to appoint a regulator rather than contemplate an overhaul of the banking system would be an example of how a system can turn the wheels of governance without, in fact, generating any momentum.

The concern I write about is not limited to the public of India. It’s felt by people across the world. Hence, the protest votes that have dissolved the traditional political dichotomies of Left-Right. Hence the success of unelectables like Donald Trump. People have doubts not about democracy but about the systems created to channel democratic expression.

A couple of years ago, Klaus Schwab, the President of the World Economic Forum, wrote a book, The Fourth Industrial Revolution. He wrote that the fusion of physical, digital and biological innovations would be revolutionary and disruptive, comparable to the changes wrought by the first three industrial revolutions. He described the essence of this revolution: “Ubiquitous mobility, internet of things, artificial intelligence, gene sequencing, and nanotechnology.” He advised business leaders to reorient their processes, organisations and thinking to tackle the challenges.

What Schwab did not address was the political model required to respond to this revolution. He should have perhaps called for a “Fourth Political Revolution”. A model that in succession to tribalism, feudalism and democracy is based on the will of the people and also responsive to the forces of globalisation, technology, and humanity.

Three shades of a BJP surge 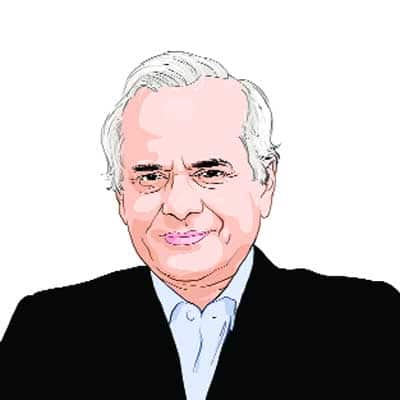