No Proof Required: The best government for fiscal discipline

Budget 2016-17 should be regarded as perhaps the best budget since 1996. The BJP’s surprisingly good fiscal performance in 2014 and 2015 suggests that achhe din are here Budget 2016-17 has met with near universal approval for its commitment to the path of fiscal consolidation (and focus on agriculture). On deeper investigation, the path of fiscal consolidation for the current fiscal year is even more impressive than credited by experts. As is well known, the accounts for any fiscal year run from April to March. Throughout this article, a fiscal year will be represented by the first year — that is, April 2015 to March 2016 is year 2015.

The world, including India, has been going through a long period of declining inflation — the world since the crisis year of 2008, and India since the exit of the UPA-led government in May 2014. If this decline is broadly structural then it is likely that the government will consistently miss the targeted nominal GDP growth. This has been happening consistently in India since 2011.

Inflation (based on consumer price index) in India reached a peak of 13.2 per cent in 2009. Since 1974, retail inflation has been higher just once — in 1991, when CPI inflation hit 16.6 per cent. Now no one, not even the most apologist admirer of the UPA’s dole-onomics, has even dared to suggest that 2009 was a reform year. The financial crisis, which started in May 2008, brought down inflation rates around the world. On the other hand, in India, CPI inflation accelerated by 3.5 percentage points to 13.2 per cent. This was a policy choice made by the UPA government: Increasing doles to win over hearts and minds and votes — the economy and fiscal discipline be damned.

In February 2015, the BJP government committed itself to a 3.9 per cent fiscal deficit. This goal involved two separate targets — a target for the nominal revenue and expenditure stream of the government, and a target for nominal level of the GDP. But the denominator (actual GDP) is affected by several factors both domestic (such as weather) and international (such as global growth and oil prices). Essentially, these factors are nearly exogenous to any government. But the numerator (revenue and expenditure) is within the control of the government. The analysis of fiscal discipline should be limited to factors that the government can influence. 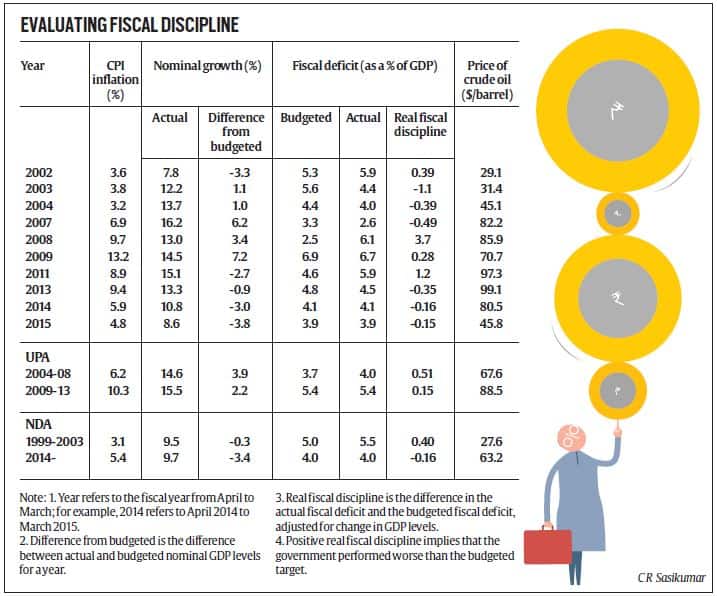 Now, the actual fiscal deficit in 2011 came in at 5.9 per cent of the GDP (the budgeted was 4.6 per cent), and should have been 4.7 per cent (after adjusting for the GDP level). Hence, the RFD was + 1.2 per cent, or the worst since 2008 when, because of the fiscal crisis, the RFD came in at 3.7 per cent — this was the highest since 1997. Note that the budgeted versus actual data are not available on any website, including the RBI’s.

The table documents the performance for 20 years, including averages for different political regimes. The RFDs for the last two NDA years are near identical at minus 0.15 per cent of the GDP, that is, in both years, the fiscal deficit came out 0.15 per cent below what it should have been. The NDA has not been given any credit for its performance in 2014, partly because it increased the targeted deficit from 3.9 to 4.1 per cent of the GDP. But the decline in deficits by a cumulative 0.3 per cent of the GDP in the two years, 2014 and 2015, implies that the Narendra Modi-Arun Jaitley regime has nearly made up for that fiscal indiscipline.

To be sure, in each of the numbers contained in the table, there are errors. As far as fiscal deficit numbers are concerned, there is the traditional kicking of the can down the road — that is, part of the fertiliser subsidies appear in the next year as “expenditures”. There are some who maintain that the GDP growth is overestimated at present. Note that this presumed error does not creep into our calculations since we are concerned only with the nominal numbers.

What about the oil price decline? Whenever the discussion is about the good fiscal performance in 2015 (and, according to the above, in 2014 as well), the caveat of declining oil prices, and hence benefit towards a better fiscal deficit (via oil taxes), is always mentioned. But while oil price changes are exogenous, the decision to tax, or subsidise, oil is an explicit policy decision, and both in 2014 and 2015, the BJP decided to pocket most of the decline in the international price of oil. Although the international oil price became half in 2015, the consumers only received 10 per cent of the decline.

One final point about Budget 2016-17. Was there a turn towards agriculture? A large element of the 80 per cent increase in the allocation for agriculture is fictitious — it is just an accounting change of Rs 15,000 crore of interest subsidy for short-term credit, which was contained in the ministry of finance accounts earlier, and is now allocated to the ministry of agriculture. However, after eliminating this transfer, agriculture, irrigation and rural development have been allocated an increase of 16 per cent. If inflation stays around 4 per cent, this will be one of the three highest increases in the last 20 years.

In sum, Budget 2016-17 should be regarded as one of the best, perhaps the best, since 1996. The NDA’s fiscal performance in 2014 and 2015 suggests that acche macro din should continue well into the future.

The Empire Strikes Back