If PM Modi wants redemption, he needs first to admit that mistakes were made

The Prime Minister must accept that it is useless trying to manage perceptions when he needs to manage horrendous realities. 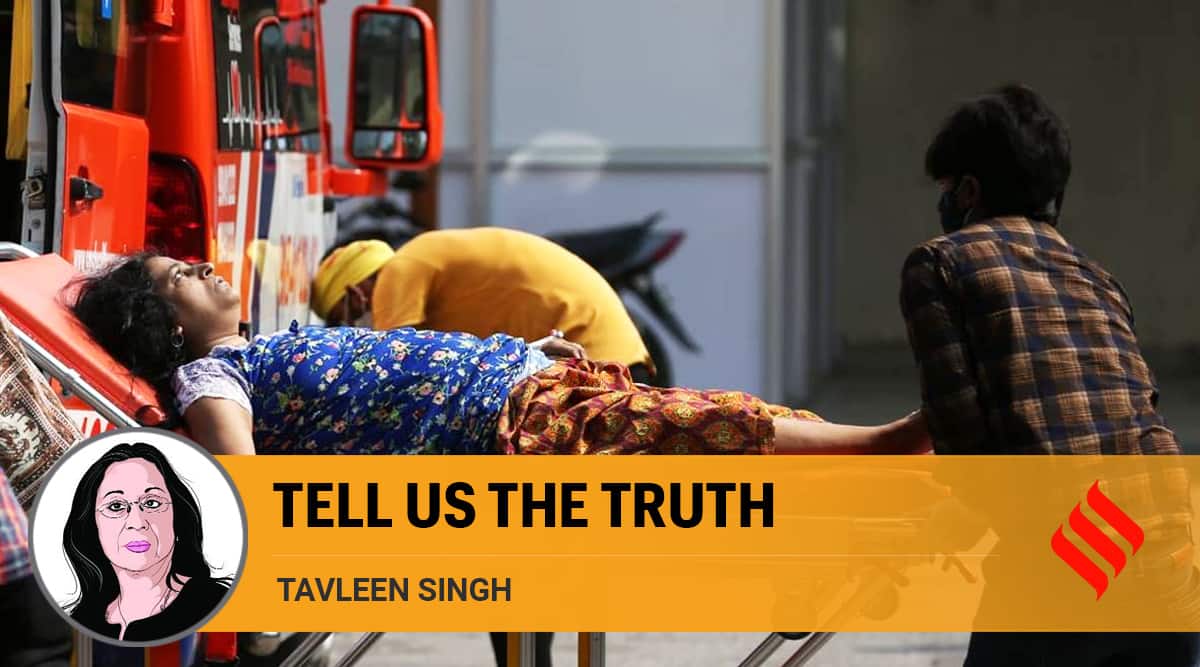 A large Number of patients coming to the hospitals for medical treatment and lack of oxygen. (Express Photo by Vishal Srivastav)

The one thing we do not need in this awful time is for political leaders to start telling lies. We need the truth. What we are getting are lies. The first big lie came from Yogi Adityanath who declared that there was no shortage of oxygen, beds or drugs in hospitals or Covid centres in his state. He warned that stern action would be taken against those ‘spreading rumours’ about shortages. This is no empty threat. Journalists have been jailed for telling the truth in Uttar Pradesh. This time it will not be easy for Yogi to jail journalists for telling the truth because it is manifest in the pyres that burn night and day, in people begging for beds in hospitals and in those who die outside hospital gates.

If Modi wants redemption, he needs first to admit that mistakes were made, and that he commits himself to not making any more. This second wave would have come anyway but it would not have been catastrophic if we had sufficient supplies of vaccines, oxygen and Covid drugs. In this ludicrous and pathetic effort to manage perceptions rather than the pandemic we now have high officials and senior ministers squabbling openly about who is to blame for the mistakes. It does not matter who is to blame.

What matters is that there is almost not a single family in my circle of friends and acquaintances into whose home this dreaded virus has not found its way. There is so much death and disease in the air that people are now terrified of going anywhere even if they have been lucky enough to be counted among the handful of Indians who have managed to get both shots of the vaccination. There is such a severe shortage of vaccines now that chief ministers admit they cannot go ahead with vaccinating all Indians over the age of 18. Within hours of the announcement that this was going to be permitted from May 1, more than one crore people had registered on the official app. Why was this programme announced at all when the shortage of vaccines is a crisis in itself?

The next major crisis, as the cardiac surgeon Dr Devi Shetty has pointed out more than once, is going to be a severe shortage of doctors and nurses. He has written articles detailing how this shortage of manpower should be handled but so far there has been no action from the Prime Minister’s task force. Dr Shetty warns that in the next few weeks there will be a shortage of 3.5 lakh medical staff and 5 lakh ICU beds. Will someone up in the cloistered, virtual world inhabited by the Prime Minister and his high officials please listen?

These officials have blood on their hands. People have died because of their criminal incompetence but not one head has rolled. Why? If Narendra Modi wants to redeem more than his image, he must sack the men who have brought us here. We need a new task force that must include scientists, doctors and competent officials. Indian bureaucrats have a long history of failing India in times of crisis. This happens because of their inability to believe that they can make mistakes and because of their colonial training to serve the rulers and not the people. This time desperate Indians are paying the price for their arrogance.

Today, we will learn the results of this round of elections, but I have not mentioned them in this column. This is not an oversight but deliberate. I am so sickened by the obscenely large election rallies that went ahead when people were dying that I no longer care who wins. Modi’s BJP, and it is now totally his, cares so much about winning elections that this time they have cared more about the West Bengal election than about finding a way to stop Indians from dying.

The Prime Minister must accept that it is useless trying to manage perceptions when he needs to manage horrendous realities.

This article first appeared in the print edition on May 2, 2021 under the title ‘Tell us the truth’

Over a week after J&K set up force to act against govt staff for ‘activities against state security’, teacher sacked