Tavleen Singh writes: Democracy and freedom are worth defending, these are India’s foundational values

The message of this year’s World Economic Forum’s annual meeting is that times are bad and there are more bad times ahead. When the Secretary General of the United Nations, António Guterres, was asked if he had ever lived through a worse time for the world, he replied that he had not. 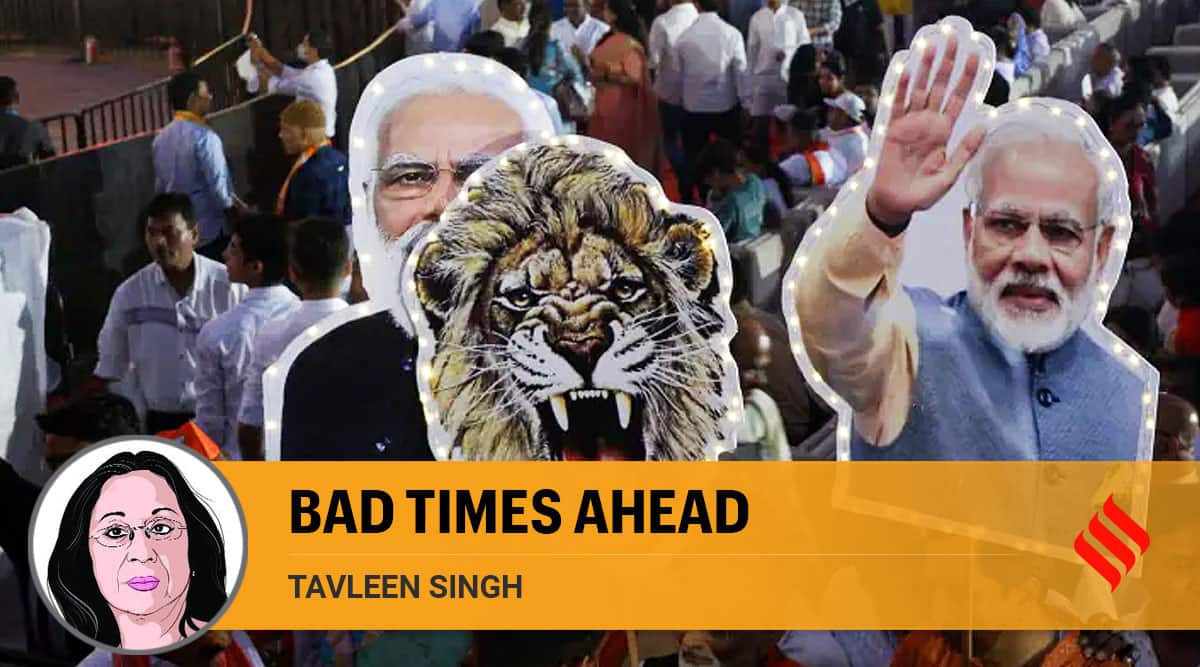 Cutouts of PM Modi at his recent rally in Mumbai on January 19. (Express Photo by Pradip Das)
Listen to this article
Tavleen Singh writes: Democracy and freedom are worth defending, these are India’s foundational values
x
00:00
1x 1.5x 1.8x

In the many, many years I have come to Davos to attend the World Economic Forum’s annual meeting I have never seen such an Indian blitzkrieg on the Promenade. On two ends of it were large posters of our Prime Minister in a saffron-coloured jacket smiling confidently at those who wandered below. In between the two posters were shops converted into exhibition pavilions inviting investors to come to Maharashtra, Telangana and Tamil Nadu and, of course, India.

Nearly all the other shops on the promenade were taken over by Indian software companies. This advertising blitzkrieg was fortified by the largest contingent of officials to ever come to Davos. Heading the contingent were three senior ministers of the Modi government. And there were more Indian journalists and TV crews than I have ever seen in this small Alpine town. Sadly, inside the congress hall India found little mention because between the Ukraine war, the climate crisis, and the grim shadow of a world recession, there was little time for India.

The message of this year’s annual meeting is that times are bad and there are more bad times ahead. When the Secretary General of the United Nations, António Guterres, was asked if he had ever lived through a worse time for the world, he replied that he had not. “We are looking into the eye of a Category 5 storm,” he said in his speech. Other world leaders at the meeting said the same thing in different ways. Oddly, it was Ukrainian President Volodmyr Zylensky who offered some words of hope. “The world overcame apartheid, the pandemic, the financial crisis…Now the world is fighting Putin. The world will overcome again.”

Tavleen Singh writes |Modi encouraged India to dream of becoming developed country, but we may not get there quickly

In this column I have said before that the Russian dictator’s invasion of Ukraine is a war crime, not a war. It is my considered opinion that Putin is the Hitler of our times and that he must be stopped from waging this wicked, senseless war on the people of Ukraine. Now that he has found it hard to win on the battlefield, he seems determined to reduce Ukraine’s cities to rubble and break the will of the Ukrainian people by ensuring that they are forced to spend this winter without electricity, running water and with the constant terror of the next Russian missile or Iranian drone. This is not war. It is a crime against humanity.

It shames me that India has not denounced Putin more strongly but clearly our Prime Minister understands well that most Indians do not know where Ukraine is or care. Those who do, appear to believe it is in India’s ‘national interest’ to stay on the fence so that we can continue to buy cheap Russian oil and second-rate Russian arms. But is it really in India’s interest to not take a stand? If Putin remains undefeated, will it not send a message to our own neighbourhood dictator that he can continue to intrude across our borders in Ladakh and Arunachal Pradesh because we are too weak to do anything? Perhaps one day we will understand that democracy and freedom are worth defending. These are India’s foundational values.

For now, let’s talk of other things. I have come down from the mountains and on my way home. Outside my hotel window it is a snowy, grey morning and I am catching up with the news from India. The app called MyGov has just popped up on my phone and it announces Pariksha pe Charcha 2023. There is a picture of the Prime Minister urging students to ‘Become an Exam Warrior’ and declaring that the PM is here to answer all questions. I switch from this app to reading the Indian newspapers online and find that the Prime Minister is on front pages traveling on the metro in Mumbai and announcing a whole range of new projects for the city. There are impending municipal elections in Mumbai that are important enough for the Prime Minister to make a personal visit.

The news that worries me is that there will soon be changes made to our information law to enable officials in the Press Information Bureau (PIB) to decide what is fake news and what is not. Having lived through those Emergency years when PIB officials pre-censored newspapers like this one because they dared to defy censorship, I find the new rules ominous. I notice that the Home Minister said something at this newspaper’s ceremony to award good governance that is also troubling. He said that there was a difference between activism and journalism and that it was wrong for activists to become journalists and for journalists to become activists. The problem, dear Minister, is that nobody is sure who has the right to decide this difference. And what will happen to journalists who are charged with being activists?

These are questions that are troubling because India’s greatest strength is her democracy, and it is the fundamental duty of the media to protect it from infringement by officials and politicians. It is not possible for journalists to do their job truthfully if they need to constantly worry about whether the subjects they choose to write about might be interpreted by some two-bit PIB official as activism. It is worth allowing a few activists to pretend to be journalists rather than make rules that could cause real harm to real journalists because democracy cannot exist without watchdogs.