Tahir Mahmood writes: Can Hindus be a minority in India?

In the late 1990s, a special report of the NCM recommended to the government that all minority-specific laws and schemes should be extended to the Hindus where they met the international criterion of being a minority. But for governments, across parties, the issue is a very complex one 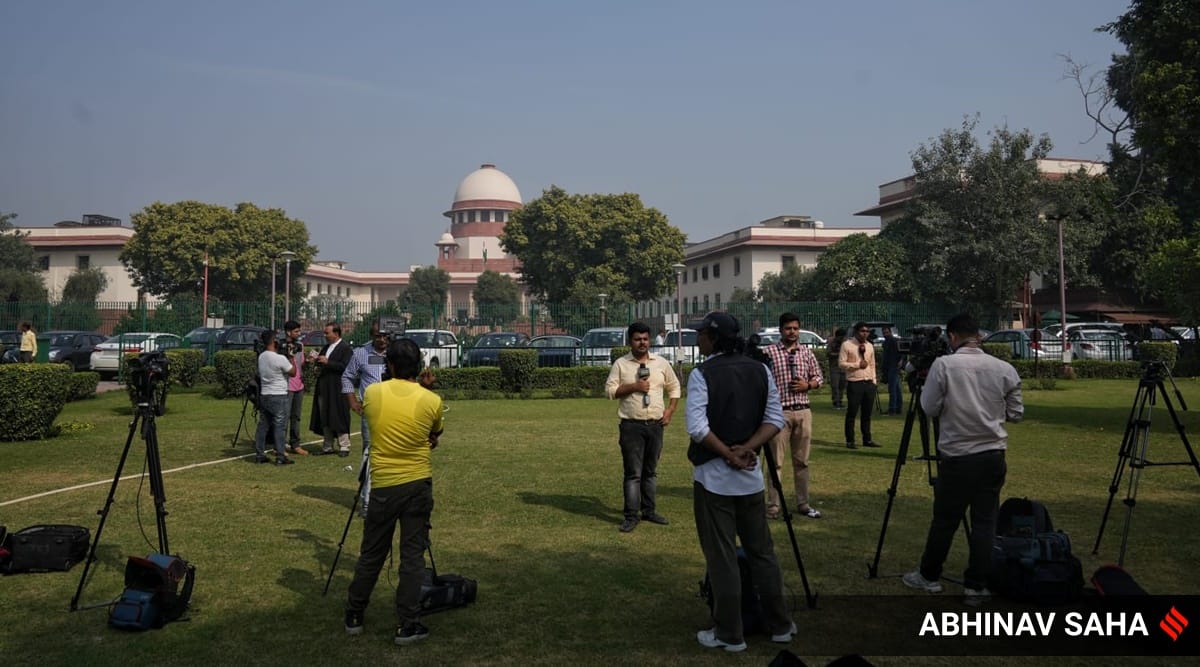 The issue of a minority tag for Hindus is currently before the Supreme Court. (Express Photo: Abhinav Saha)

“The minority of people or things is a number of them that form less than half of the larger group, used especially when the number is much less than half of the larger group.” This is how major English dictionaries define the term “minority”. The concept of minorities within the population of a state, or a part of it, is well-established in international and national laws all over the world. Two years after the birth of the United Nations, following World War II, a Sub-Commission on the Prevention of Discrimination and Protection of Minorities was set up as an organ of the International Commission on Human Rights. A special report of the Sub-Commission released in 1977 described “minority” as a group “numerically inferior to the rest of the population” and citizens of a state “in a non-dominant position” based on ethnicity, religion or language. In 1992, the UN promulgated a Declaration on the Rights of Persons Belonging to National or Ethnic, Religious and Linguistic Minorities mandating nations of the world to protect their existence and identity and create favourable conditions by adopting appropriate legislative and other measures to ensure that they effectively exercise their human rights and fundamental freedoms.

Major constitutions of the world contain provisions ensuring local minorities a fundamental right to maintain the essentials of their identities and an equitable share in the country’s development schemes. In the Indian Constitution, Article 29 titled, ‘Protection of interests of minorities’ safeguards the right of “every section of the citizens” to conserve its distinct language, script and culture; and the next Article recognises the right of religious and linguistic minorities to establish and administer educational institutions of their choice. Nowhere in its provisions, however, does the Constitution provide any criteria for determining the minority status of any community or group at any level of the country’s federal structure. The Seventh Schedule listing the subjects on which the central and state legislatures, or both, can make laws does not mention or indicate jurisdiction for this purpose.

Also in Express Opinion |P Chidambaram writes: Will Hindi and Hindu own India?

There is no definition of the term religious minority in any legislative enactment either. In 1978, while state Minorities Commissions were already working in UP and Bihar, Prime Minister Morarji Desai’s government set up a similar central body with representatives of Muslim, Christian and Parsi communities. A few months later, it was expanded to include a Sikh and a Buddhist member. Enacted in 1992 to regulate its powers and functions, the National Commission for Minorities Act left it to the government to decide which communities would be “minorities” for its purposes. The notification issued soon in this regard maintained the status quo by confining the list to Muslims, Christians, Sikhs, Buddhists and Parsis. The Jains protested against their non-inclusion and the Commission (NCM) conveyed their demand to the government with a favourable recommendation. After the Supreme Court decision, that minority status of any community was to be determined at the state level (TMA Pai, 2001), their leaders approached the Bombay High Court for a direction to the government for their recognition as a minority. Failing to get relief, they appealed to the apex court, which too held that the issue was for the government to decide (Bal Patil, 2005). Their demand was at last fulfilled by the Manmohan Singh dispensation at the Centre on the eve of its exit in 2014. Two years later, the BJP-Shiv Sena government in Maharashtra, acting under the State Minorities Commission Act of 2004, recognised the minority status of the tiny Jewish community in the state.

At the national level, Hindus have always been the predominant majority; in relation to them, all other communities are minorities. Some of the national-level minorities, however, constitute the majority in certain parts of the country. Should the special provisions of the Constitution for minorities and governmental schemes for their welfare apply to them in such places too? This question has been under debate at various forums since long. In the late 1990s, as NCM chairman, I had toured some such places where the local Hindu leaders had met me to press for an official clarification in this regard. A special report of the NCM had then recommended to the government that all minority-specific laws and schemes should be extended to the Hindus in those states and Union territories where they met the international criterion for recognising a community as a minority.

The issue is currently before the Supreme Court. There are two different petitions filed in 2020 and 2022, now clubbed and under hearing before the same Bench. The Court has repeatedly sought the Union government’s response and its viewpoint that “the matter is sensitive in nature and will have far-reaching ramifications” has been widely reported in the media, with the information that the court has shown resentment at the indecision in the matter (IE, November 2).

It must, however, be realised that the issue is indeed complex and not a cakewalk for any government. The NCM recommendation in this regard, mentioned above, was made just after the Vajpayee-led BJP government had taken over the reins of the country, but it could not formulate its response until the end of its six-year rule in 2004. Nor could the succeeding Manmohan Singh government take a stand on it during its decade-long steering of the nation. The matter is entangled in communal overtones and political complications. While the ground situation demands some affirmative action, there are people and organisations in whose view “Hindu minority” in India is a contradiction in terms.

Ideally, every citizen should have the same rights and an equal share in national resources just as a citizen of the country, and not as a member of this or that religious community. The majority-minority classification of citizens in the population of a state is, however, deep-rooted in law and politics across the globe; and it may be too late in the day for any ideology to consign it to the ash heap of history.

The writer is former chairman, National Commission for Minorities

Mira Rajput’s ‘postcard from the Pink City’ is a mix of fashion, food and travel; see pics