🔴 S Y Quraishi writes: It is in violation of the constitutional spirit, irrespective of how important or urgent the issue 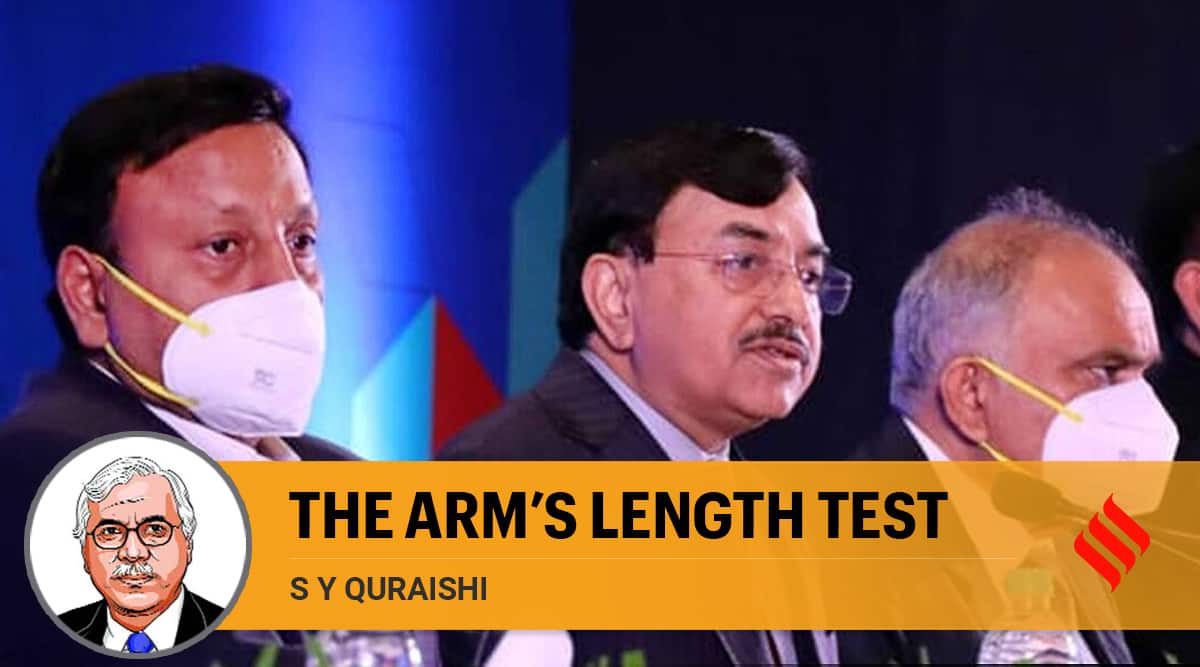 Sushil Chandra, Chief Election Commissioner of India with other officials addressing media during press conference regarding Review of Poll Preparedness by Election Commission of India for Punjab Assembly Elections 2022 at Chandigarh IT park on Thursday. (Express Photo by Kamleshwar Singh)

My memory went back to June 27, 2006, when I received a call from Pulok Chatterji, the Principal Secretary to the then PM, Manmohan Singh, informing me that I was being considered for appointment as EC and asking if I would accept it. Postings in the government are not optional; you are just appointed. Why this question, then? The reason was made clear by Chatterji. I will have to resign from the IAS.

Why was the appointment as EC conditional on my resignation from the IAS? Therein lies the important constitutional principle of distancing from the executive/government. Importantly, a wall was built between me and the PM who had appointed me.

Editorial |By not standing up to a virtual summons from government, EC undermines itself

As secretary to the Government of India, I was at the mercy of the PM, but as the EC, I was independent, neutral and distant from him. There was no question of his calling/summoning me to see him or with any request, let alone any direction or instruction. He could appoint me but could not order me, or remove me because of the constitutional scheme of things. An independent ECI is a gift of the Constitution to the nation. Free and fair and credible elections are sine qua non of the EC. The Supreme Court has repeatedly stressed this point, calling it part of the basic structure of the Constitution.

The PMO summoning or “inviting” not just the CEC but the full bench is in violation of the Constitution, irrespective of how important or urgent the issue. Let alone the PS to the PM, even the mighty PM himself cannot indulge in this unacceptable act. Can you imagine the PS to the PM issuing such summons to the CJI, to come with the full bench and attend a meeting with him on judicial reforms? He will be running for cover with a contempt of court case.

In my opinion, there is no difference between the neutrality and independence of the Supreme Court and ECI in this context. Both are independent constitutional authorities deliberately separated from the executive. Not to speak of summoning CEC and ECs, the PS to the PM cannot even call on the ECI without public knowledge of the meeting and what transpired in it. Politicians of all hues visit the ECI regularly with their petitions or complaints or suggestions, but with full transparency. I never met any of them alone, insisting on the presence of my two colleagues. Transparency is the key word here and perception of transparency is equally important.

Now, let us talk about the protocol, though that is secondary. The CEC is very high in the warrant of precedence — ninth, while the PS to PM is 23rd. How can such a high constitutional functionary be summoned to attend a meeting with an officer, howsoever high and mighty? The law ministry, which advises the government on all legal and constitutional matters, should have known better than convey that the PMO “expects” the CEC/ECs to attend.

I will recall another event. One day, I got a call from Veerappa Moily, the then law minister. “Mr Quraishi, you have been raising the issue of electoral reforms. Why don’t you come for a cup of tea in my office so that we discuss them?” I was in a fix, but only for six seconds. My going there would have been in violation of the spirit of the Constitution. I declined the invite. Instead, I requested the honourable minister: “Sir, thank you for your kind offer but why don’t you come over instead? I will introduce you to my brother commissioners and senior officers.” Gracious as he was, Moily came over the next day with four of his top officers. What was expected to be a short semi-courtesy meeting went on for over three hours. He asked whether we would like to join the ministry in hosting seven regional conferences to build a national consensus on electoral reforms. We readily agreed. When all regional meetings were over, the law minister came over to the Election Commission a second time to discuss the arrangements for the final national meeting.

Just as the reforms were getting materialised, Moily was shifted to another ministry and replaced by Salman Khurshid. I called up the PM to protest that just when Moily had built up a national consensus, you have transferred him, undoing all his and our work of six months. He said, “Don’t worry. Salman will carry forward this work. I will send him to you”. Note that the PM did not say, “go and meet him”.

Sure enough, Khurshid came to the Commission within a week and reassured us about taking the reforms forward. It’s a different matter that the proposal fizzled out. The important thing is that the Union law minister, who heads the ECI‘s administrative ministry and sanctions our budget, visited the ECI thrice in four months, in keeping with the spirit of the Constitution.

The initial reaction of horror and disgust of the CEC and ECs was most heartening and I salute them. But why they got persuaded to attend the “informal interaction” subsequently puzzles me. A meeting of the PS to the PM, formal or informal, online or in the PMO or ECI, just before elections raises unnecessary suspicions. Who knows what was discussed. The election dates? Or, something else?

This incident is a transgression that should not happen again. The distance of an arm’s length in interactions between institutions envisaged in the Constitution is sacrosanct. It should not only be maintained but also “seen” to be maintained.

This column first appeared in the print edition on December 18, 2021 under the title ‘The arm’s length test’. The writer is former Chief Election Commissioner of India and the author of An Undocumented Wonder — The Making of the Great Indian Election

Delhi Confidential: After its spokesperson’s faux pas, BJP tries to do damage control