Spring is far behind

Government resolve to continue to use pellet guns against protesters in Kashmir is deeply troubling. Kashmiri muslims throw stones during Funeral procession of Junaid, 12-year-old, of Saidpora, Srinagar succumbed to injuries on wee hours of Saturday morning at SKIMS Hospital. He had sustained pellet injuries on his head during the clashes between government forces and people on Friday evening, 08.10.2016. (Express Photo/Shuaib Masoodi)

“They may survive today but we will get them tomorrow. Our relentless operations will continue,” India’s army chief, General Bipin Rawat, chose to hold out dire public warnings of “tough action” against the stone-pelting young people of Kashmir. He declared that the government is prepared to give those who support terror activities an opportunity to join the “national mainstream”, but warned that if they continue their actions, the security forces would respond with “harsher measures”. He also gave notice that those pelting stones at security forces during anti-militancy operations would be considered anti-national over-ground workers of militants. He added that the army would go “helter skelter” against local boys who pick up arms or aid besieged militants.

Close on the heels of these ominous warnings, the director general of the Central Reserve Police Force, K. Durga Prasad, announced the government’s resolve to continue to use pellet guns against protesting civilians in the Valley, although with some modifications to reduce injuries to the face and eyes.

The snows have begun to melt in Kashmir, marking the advent of spring. Yet these proclamations brings little cheer or hope to the people of the Valley. They signal that there will be no change in the BJP-led government’s hard-line Kashmir policy. The bloody months of stone-throwing mass agitations in the Kashmir Valley in 2016 left in their wake what has come to be known as the “epidemic of dead eyes”. Despite widespread dismay and criticism of the use of pellet guns against agitating crowds because they blinded hundreds of children and youth, the government made it clear that its forces will continue to deploy them in Kashmir. The only concession to outraged public sentiment is that the guns will be fitted with a deflector to reduce — but not eliminate — chances of the pellets hitting the face and eyes or sensitive organs in the abdomen. But these safeguards will depend on the soldier adhering to protocols of firing at the feet of agitators. Even if he does, since each round of gun fire will release a spray of hundreds of pellets, there is no guarantee that these will not blind or disable people, mostly young people, but also women in the crowds and bystanders. Small children watching from windows have been blinded by pellets.

What is more worrying is that it is very rare, if not unprecedented, to hear India’s army chief — normally fittingly apolitical — use the belligerent language of threats to target not enemy soldiers or armed militants, but the country’s civilian populations. In the 1990s, the uprising in the Kashmir Valley was fuelled by militants supported by the Pakistani establishment. But after an entire generation of Kashmiris has grown up under the shadow of the gun, the revolt has transformed increasingly into a mass movement. Young people have lost their fear of the soldier and the gun. They are spilling in the thousands onto the streets, and there is no part of the Valley that is untouched by their rage.

In any democratic country, the fundamental principle that must govern lawful crowd dispersal is the minimum necessary application of force. The force that is used against violent crowds should be unavoidable and proportionate to the violent actions of the crowd. It should be carefully calibrated, targeted and deliberate. Deadly force should be used only as the last resort, after all other measures are tried and failed, and after due warning to the crowd. Even when this last-resort lethal force is used, it should be deterrent rather than retributive, and should be followed by full medical attention to save the life and limbs of the injured person.

None of these standards are met by pellet guns, therefore these are very rarely used against civilian populations anywhere in the world. Every time pellet guns are fired, they spray 500-700 pellets. It is impossible for the pellets to accurately target a particular individual or the most violent sections of the mob, therefore, the random hitting of innocent bystanders is highly probable. Pellets are made from lead, and are irregular in shape. Their rough edges cause unpredictable damage when they hit sensitive parts of the body. They are particularly destructive when they enter the eye. The soft tissue of the retina is irreparably destroyed by the trauma of high-velocity lead pellets. Doctors in hospitals in Srinagar worked heroically almost without sleep for several weeks to try to save the eyes of hundreds of young patients. Often the lead pellets got embedded so deeply in the skull that doctors could not extract these; these can lead to poisoning and unpredictable disasters later in the patient’s life. Bullets kill, but pellets leave people blinded or disabled for a lifetime. And many patients did not approach a government hospital for fear that merely having pellet injuries could mark you as a stone-pelter and the police would register criminal charges against you.

The instrument of violence deployed by Kashmir’s youthful agitators is stones. The answer of the Indian security establishment to their stones is bullets and pellet guns. Last winter, I visited the Valley with a solidarity team comprising Pamela Philipose, Tapan Bose, Navsharan Kaur and Dinesh Mohan. We encountered numerous young people blinded by pellets, and others with bullet injuries in their skulls and legs. Some of those felled and blinded may have been among those who pelted stones on the soldiers and policepersons who tried to block their processions. But many were too young to have even understood what was happening. Their families were utterly devastated with the suffering of many who were still children. The wanton blinding by security forces of children has wounded the souls of the Kashmiri people in ways that little else has in the past.

The question that people asked us over and over again was this: “You say we are equal citizens of India. Yes, some of our boys pelted stones. But we know of far more violent mobs in other parts of India last year — the Jat and Patidar agitations, the Cauvery dispute and many others. To disperse those mobs, have security forces ever used pellet guns? In all those unrests, lathis, tear-gas and water-cannons were found to be sufficient by India’s security establishment. But why is it that only for Kashmiri youth throwing stones, you use pellet guns?”

Despite the fact that pellet guns fail to meet any standards of national and international law for crowd control, the government’s proclamation that it will continue to deploy pellet guns, and the army chief’s muscular warnings of “tough action” against even those who do not use the gun are deeply troubling. The government is prepared to continue to blind, disable or even kill its youth if they try to fight the army with stones, or they have the misfortune of being part of an angry crowd or just an onlooker. The signs are unmistakable that the government is almost in a state of undeclared war against its own people. 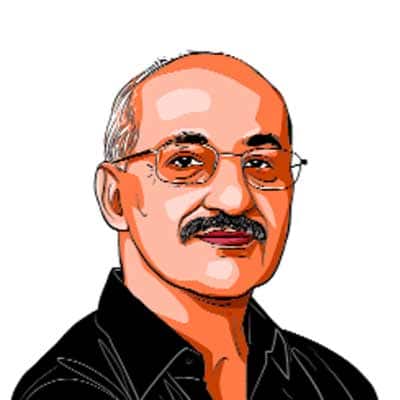