Ram Madhav writes: Although PM Sheikh Hasina restored ‘secularism’ in the constitution in 2011, the country continues to maintain the odd distinction of being a secular country and an Islamic state simultaneously. 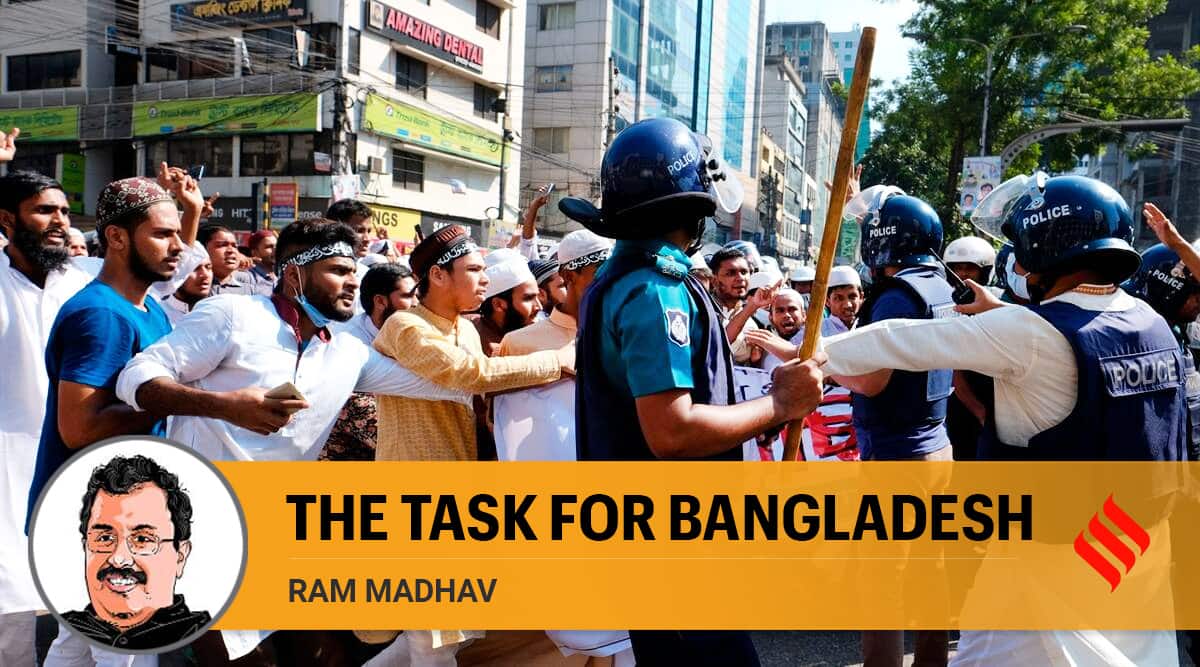 Dhaka: Police clash with Muslim devotees during a protest in Dhaka, Bangladesh (AP)

A K Abdul Momen, Bangladesh’s Foreign Minister, has tried to downplay the recent communal violence in the country, blaming “enthusiastic media and individuals” for spreading “cooked up stories” to embarrass the government. He denied that there were any rapes or destruction of temples and insisted that the government is “committed to religious harmony”.

It is true that more than 500 people have been arrested by the police and action has been initiated against them. The government is also compensating the victims. There is also no denying the fact that the condition of minorities like Hindus, Buddhists and Christians has been better under the Sheikh Hasina regime. Representation of Hindus has steadily improved in Bangladesh’s Jatiya Sangsad in the last three elections. There are 18 elected Hindu MPs today, 17 of whom are from the ruling Awami League. Their representation in government services has also increased in the last more than a decade. Minorities constitute about 7 per cent in civic employment and 10 per cent in police jobs. Several Hindus occupy senior positions. Justice Surendra Kumar Sinha became the Chief Justice of Bangladesh Supreme Court in 2015. He had to resign after three years because of political, not communal, reasons.

Durga Puja mandaps get financial support from the government besides security for major ones. Sheikh Hasina gave the slogan, “Dhormo jar jar, utsob shobar (Religion as per one’s own, but festivals common to all)”. As a result, the number of Puja mandaps went up. There were over 30,000 Durga Pujas in 2017 and 31,272 in 2018. Numbers this year, after the Covid pandemic, are about the same. Sheikh Hasina also took special care to support Dhaka’s Dhakeswari temple, when the management was facing challenges.

But there is another side too. Governments in South Asia tend to downplay communal cleavages and their violent fallout. Bangladesh is no exception. There is ample visual evidence about the extent of arson and violence during the Durga Puja. That the violence was spread over more than 70 districts proves that it was a well-planned attack. Besides the BNP and Jamaat cadres, there were many among the perpetrators owing their allegiance to the ruling party too.

Hasina came down heavily on the radical Islamists responsible for atrocities during the formation years of Bangladesh. War crimes tribunals have ordered the execution of many Islamists responsible for brutalities during the liberation war, including senior leaders of Jamaat-e-Islami (JeI) and Salauddin Quader Chowdhury of the BNP. Hasina demonstrated her resolve against Islamic terror by quickly punishing the perpetrators of the July 2016 bombings at the Holey Artisan café, in which 22 people, including 16 foreigners, were massacred. Seven Islamists have been given death sentences in that terror attack. But when it comes to atrocities against the minorities, the Hasina government fails to show similar determination, baffling many secular-minded eminences and emboldening radicals. A report by human rights organisation, Odhikar, states that between 2007 and 2019, 12 people belonging to other religions were killed, 1,536 injured, and 1,013 properties and 390 temples attacked. Hindus bore the brunt of this bigotry. The human rights organisation, Ain o Salish Kendra (ASK), reported 3,710 attacks exclusively on Hindu communities (10 deaths and 862 injuries) between January 2013 and September 2021.

Islamist radicalism is on the rise in Bangladesh despite efforts by the Hasina government. Madrasas are booming. As per the government’s estimates, the number of Qawmi madrasas could be anything between 13,902 and 33,000. There are another 70,000 mosque-based Furqania maktabs and more than 4,000 Hafezia madrasas, as of 2008, which were not included in the above numbers.

There were reports about tinkering with the country’s “secular” education curriculum. In 2017, poems and stories by Sunil Gangopadhyay, Sarat Chandra Chattopadhyay, Humayun Azad and Rabindranath Tagore were quietly removed from school textbooks and replaced with more “Islamist” pieces.

Bangladesh’s current challenge is not just about security for its minorities. It is about its larger identity. There was a time when the phrase “Bengali Muslim” used to be considered an oxymoron. But thanks to the efforts of leaders like Fazlul Haq during and after Partition, and Mujibur Rehman during and after the liberation war, such an identity has been created — it was to be secular, socialist, nationalist and democratic. Fazlul Haq had refused to toe the Muslim League line in Bengal. He started the Krishak Praja Party, defeated the League’s Islamist strongman Khwaja Nazimuddin in 1937, opposed the Partition and, together with leaders of the Congress like Sarat Chandra Bose, wanted Bengal to become an independent country.

“Bangabandhu” Sheikh Mujibur Rehman, the founder of the Awami League, had infused secularism as a founding principle of the constitution in 1972. Sheikh Hasina is carrying that legacy of a Bengali Muslim, which is being consistently eroded.

General Zia-ur-Rehman and his successor General Ershad were primarily responsible for negating Bangabandhu’s vision. Zia got the constitution amended in 1979 to remove the word “secularism”. Ershad declared Islam as the “state religion” in 1988. Although Hasina restored “secularism” in the constitution through the Fifteenth Amendment in 2011, the country continues to maintain the odd distinction of being a secular country and an Islamic state simultaneously.

Hasina’s challenge, before she passes the baton on to her successor, will be to restore the dream and legacy of her father. Incidentally, it is a challenge for all of South Asia, since we are one people and communalism in one place has the potential to foment the same in another.

This column first appeared in the print edition on November 10, 2021 under the title ‘The task for Bangladesh’. The writer is member of board of governors, India Foundation.