Incidentally, in what is perceived as a slight to Bangladesh, Home Minister Rajnath Singh, who was listed as a speaker at the India Foundation function in honour of Hasina, did not show up. 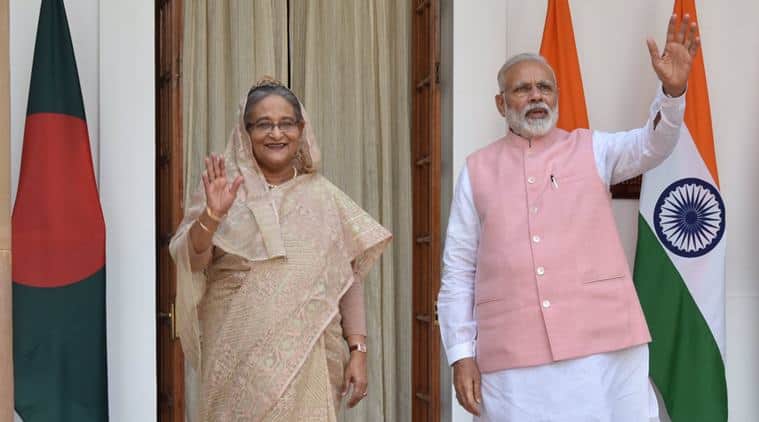 Bangladesh Prime Minister Sheikh Hasina, who visited New Delhi last week for bilateral talks, was accompanied by five ministers. At the Hyderabad House conference table when the two Prime Ministers sat down for discussions, the Bangladeshi contingent was taken aback to find that only one Indian minister, Babul Supriyo, was present. The Indian side included, instead, National Security Adviser Ajit Doval, Foreign Secretary S Jaishankar, Home Secretary Rajiv Mehrishi, Indian High Commissioner to Dhaka Harsh Shringla and Ministry of External Affairs spokesperson Gopal Baglay. Incidentally, in what is perceived as a slight to Bangladesh, Home Minister Rajnath Singh, who was listed as a speaker at the India Foundation function in honour of Hasina, did not show up. He explained he had another engagement.

When it was set up in 2011, there was a debate as to whether it made financial sense for the Rajya Sabha to launch a separate TV channel as the Lok Sabha channel already existed. Eventually, more money was invested in Rajya Sabha TV than Lok Sabha TV, for purchasing equipment, building a studio, financing programmes and hiring outsiders for content production. The ideological slant of the CEOs of the two channels reflects the current political complexion of the two Houses. However, the term of Vice-President Hamid Ansari, who is also Chairperson of the Rajya Sabha, ends in August. Facing an uncertain future, many of those working for Rajya Sabha TV are already searching for new openings. When a new vice-president is elected in August, the moot question is will this channel change its ideological colour or simply merge with Lok Sabha TV?

The NDA commands 48.5 per cent of the vote in the presidential vote. But will the Shiv Sena back its candidate? In the two previous presidential elections, for Pranab Mukherjee and Pratibha Patil, the Shiv Sena had broken ranks with the NDA. At present, relations between the ruling party and the Shiv Sena are near breaking point and the suggestion that the RSS chief be made president was mooted only to embarrass the BJP. The NDA is hopeful of tapping a section of the AIADMK, the DMK and other regional parties to make up the deficit. But the Sasikala faction of the AIADMK is on the warpath after the income tax raids on party members.

Mayawati may have first raised the issue of ‘faulty EVMs’, but it is Mamata Banerjee who took the lead in uniting the Opposition on it. Sixteen opposition parties joined together in questioning the reliability of EVMs. After Banerjee’s intervention, the Congress withdrew its original petition to the Election Commission that at least 50 per cent of the voting be done through ballot paper. However, Veerappa Moily, Amarinder Singh and Siddaramaiah have publicly disputed their party position. Earlier Banerjee took the initiative in uniting the Opposition on the demonetisation issue, and that move flopped badly.

No faith in Digvijaya

Congress general secretary Digvijaya Singh has not covered himself in glory in his last two assignments on behalf of his party. In Goa, he allowed the BJP to form the government, even though the Congress had won more seats in the Assembly. Newly elected Chief Minister Manohar Parrikar joked that some people came to Goa for recreation and some for work. Singh was in-charge of the Bandhavgarh Assembly by-election in Madhya Pradesh, and he took time off to visit the Bandhavgarh National Park, famous for its white tigers and safaris. The Congress lost the seat. Congresspersons in Karnataka want a reshuffle in the party organisation before the Assembly elections next year. At present, Singh is in-charge of the state.

The who’s who of the political world gathered at Sharad Pawar’s residence to celebrate the release of Udaan — a fat, glossy, coffee table book on Praful Patel, the popular NCP leader. Patel remarked that when author Mukesh Gandhi suggested that he write his biography, he demurred saying a biography would imply that his achievements were all behind him, besides he is a shy person. Ghulam Nabi Azad joked that he had known Patel for 25 years and only just realised that he was “shy”. Arun Jaitley was also expected to speak but got held up at the NDA meeting. His speech text, however, took a dig at some parliamentary colleagues. He said MPs went in for two types of publications, a compilation of their parliamentary speeches, which few were even aware that they had made, or a light-hearted coffee table book, which was usually far more enjoyable for its pictorial offerings.

The Shade of You