Anti-CAA protests by Muslim women are about where, how and why you belong

Three critical factors have coalesced to make, and mark, this moment as significant, three concerns that have particular and specific meaning for women: Religion/community; citizenship; and nation/homeland. 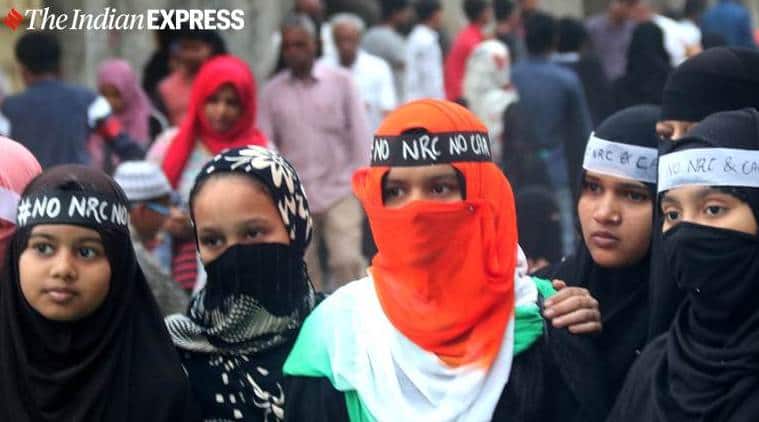 “The fire started by the women of Shaheen Bagh is no longer limited to Delhi.” In pic: Anti CAA protest in Nagpada Mumbai. (File/Express photo by Ganesh Shirsekar)

“I never stepped out of my house, not even to buy vegetables,” 75-year-old Noor-un-Nissa is reported to have said, “Now that I have, I have no plans of retreating.”

“What they did to our children in Jamia is intolerable,” says Mehrunissa from Sabzibagh, Patna. “I, too, am a mother… will he (PM Modi) give his eye to the child who lost his? We will fight and we will snatch our rights.”

“The money that will be spent on a countrywide NRC is ours,” said Nusrat Ara, from Kanpur, “We will not let this happen.”

But what was the spark that lit the fire of consciousness for the women of Shaheen Bagh, of Sabzibagh, of Goa and Gaya, and the scores who have come out spontaneously, in protest against the Citizenship Amendment Act, the NRC and the NPR? There have been serious issues in the past, there has been grievous injury, and terrible humiliation. How is it that women like Noor-un-Nissa left home and hearth, raised their voices, and smashed the stereotype? Not only have these primarily home-based women crossed the line, they are in the frontline. How did this happen?

One of the many powerful posters from the protest at Shaheen Bagh says: “Ab Nari ke Naron se Inquilab Ayega” (Women’s slogans will herald the uprising). There is another chant that is being heard in the protests about azaadi (freedom), and although the women at Shaheen Bagh may not be familiar with it, it has been the slogan of the women’s movement across South Asia for the last many decades.

Opinion: The Nanis and Dadis of Shaheen Bagh… not just Dadis

Its very first lines are: “Meri behne mange azaadi/ Hai haq hamara, azaadi/ Hum leke rahenge, azaadi” and so on. Azaadi, of course, from patriarchal oppression, now expanded to include freedom for all, from state oppression.

The Constitution of India is hardly a document that we read every day, and even its Preamble is little known to most of us. It exists mostly in abstraction, a reassuring guarantee of protection from discrimination and injustice. Its defence has never made for the kind of protests we are seeing today, and certainly ordinary — or even radical and politically active — women have not poured into the streets in their lakhs to lay claim to it. Why now?

Three critical factors have coalesced to make, and mark, this moment as significant, three concerns that have particular and specific meaning for women: Religion/community; citizenship; and nation/homeland.

Opinion | Why I protest as a Muslim

The deliberate and morally reprehensible exclusion of Muslims from the CAA on grounds of religion has been thoroughly exposed and turned on its head by the refusal of protesting women and men to be straitjacketed into religious identity. When the women demand azaadi, they demand it for all women, of all religions.

When they say “Nari ke Naron se…” they mean an uprising of all women. When they call for the repeal of CAA and NRC, they include all citizens, not just Muslims. These are secular demands, and we would be misreading them if we think they proceed from communitarian affiliation alone. Without in any way repudiating their Muslim identity — after all, the collective rozas that are being observed against a “black law” is an example of the clarity with which they have understood the importance of both in their lives. “Jab pareshaaniyan aati hain,” said Arfa, “tab hum roze rakhte hain. Is baar, qaum ke liye, mulk ke liye.” Fasting for their community, yes, but equally, fasting for the nation. It’s been a long time since anyone did that.

But what is nation in the abstract? A rather remote entity, removed from everyday experience. But homeland, where you have been born and live and work, a place you belong to, that’s a different proposition altogether. Women know intuitively, and experientially, what it means to be displaced, to be rendered homeless.

They know, that should they be uprooted from the place they call home, the dislocation will be physical, yes, but also profoundly emotional and psychological. Repeated and egregious references to Partition’s “unfinished business” by proponents of the “black law” resurrect long dormant fears of the kind of destitution and violence that wreaks havoc in very particular ways, on women. They know how their religious identity can be made to turn against them.

This is why their protest this time is not about religion, it is about safeguarding their citizenship. It is about where you belong. It is about how you belong, and about why you belong. You belong not only because you have been born in this country, but because you have laid claim to its foundational values, you have owned them. By embracing the flag and the Constitution, the women of Shaheen Bagh — and the tens of thousands of men and women, of all faiths, who have joined them — have imbued the notion of Mother India with new meaning.

This article first appeared in the print edition on February 4, 2020 under the title “Mother India.” The writer is with Women Unlimited, Delhi.

The Indian Express is now on Telegram. Click here to join our channel (@indianexpress) and stay updated with the latest headlines

Explained: What Finance panel has said