The evolving role of a secretary

Secretaries to the Government of India are playing evolving, increasingly multi-dimensional, roles. 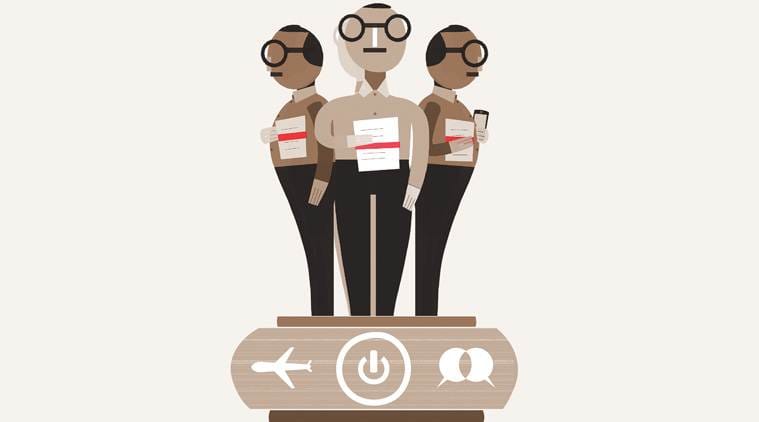 In today’s fast paced era, however, it is clear that the secretary’s role has evolved well beyond the conventional and has become increasingly complex and multi-dimensional. (Illustration: CR Sasikumar)

Having now been a Secretary to the Government of India in the Ministry of Drinking Water and Sanitation for two years and 10 months, I thought that this may be an opportune time to reflect upon the nature of the job and how the role of the secretary has evolved over the decades. Traditionally, having reached the pinnacle of his or her civil service career, secretaries to the Government of India broadly played the following main roles: Administrative head of the ministry, policy adviser to the minister, engaging with the Cabinet Secretariat and the Prime Minister’s Office and representing the ministry before parliamentary committees. In today’s fast-paced era, however, it is clear that the secretary’s role has evolved well beyond the conventional and has become increasingly complex and multi-dimensional. In my view, these four new dimensions could be categorised into two Ts and two Cs: Travel and Technology, and Converge and Communicate.

Increasingly, the traditional distinction between policy advice and being accountable for its execution is getting blurred. When I joined as secretary in the Ministry of Drinking Water and Sanitation on March 1, 2016, the major goal of the ministry had already been determined by the government through the prime minister’s announcement of an open defecation-free country by October 2, 2019. The initial feedback I got from my ministry, however, was that sanitation being a “state” subject, our role as a central ministry should be limited to setting the policy framework and providing financial and technical assistance to states.

I remember being somewhat taken aback by the above argument and responding to my Delhi colleagues: “Sure, sanitation is a state subject under the Constitution of India, but the central government also has a job to do.” Clearly, and at a very minimum, we needed to actively engage with the states and nudge them towards the goal of an open defecation-free India. We thus took on the ambitious task of proactively engaging with the states and districts to put sanitation higher up on their priority list and implement the Swachh Bharat Mission in campaign mode. This took a lot of travelling to the states, districts and villages by our central team and I have personally made over 130 visits to the field, covering all states in the country. There is no doubt in my mind that it has become critical for the secretary to travel frequently to states to be effective.

Another change in the job description of the secretary is the need to keep pace with the increasing role of technology. The use of video-conferencing for review and monitoring purposes has become de rigueur for secretaries. In the Ministry of Drinking Water and Sanitation, we also started “virtual classrooms” by using master-trainers from a studio in Delhi to virtually train district and field functionaries for triggering behaviour change in rural communities, where open defecation was practised. We also developed the Swachh App, a very handy tool to monitor on a daily basis the sanitation coverage in every village, district and state. The implementation of e-office in the Government of India also means that we no longer need to have cumbersome paper files. With mobile phones and laptops keeping us in touch with our office and colleagues across the country, there is no escape from work for a secretary even if he or she is travelling or on leave.

With the major thrust of the government on delivering social sector programmes to improve the lives of poor people, it has also become crucial for secretaries to converge across silos (read ministries) for better delivery of flagship programmes. For example, effective implementation of the Swachh Bharat Mission meant that I had to continuously work with my counterparts from the ministries of school education, health, women and child development and rural development. In the days of yore, it was more common for secretaries to typically focus on their own ministries, neglecting convergence with the related programmes of other sectors. The government’s formation of the Group of Secretaries has also provided a very effective institutional mechanism for joint work between secretaries to focus upon and come up with solutions to problems outside an individual secretary’s purview.

Yet another important change I have seen in the role of a secretary is the increasing significance of the need to communicate to the outside world, especially the media, with respect to the policies and programmes of the ministry. The traditional role of a secretary, and, in fact, of all civil servants, was to remain faceless and anonymous. But in this era of the 24-hour news cycle on television and the advent of social media, it has become important to articulate the priorities and progress of national programmes. As the civil service head of a ministry, the secretary needs to play a proactive role here. Since the training and inclination of most civil servants is to remain anonymous, specialised communication training for secretaries would be useful.

Finally, from a “veteran” secretary to the Government of India, some unsolicited advice for freshman secretaries: Don’t worry if you are in a “bad” ministry! Some jobs are perceived to be more equal than others, but the role of a secretary remains important across ministries, even if it has changed a little. Don’t treat it as a gentle ending to a glorious career and get ready to fasten your seatbelts. This final stint is likely to be the most exciting yet demanding job of your career.