Savarkar vs Nehru and Gandhi: Different versions of nationalism

Savarkar's view of the nation was ethno-religious and his focus was on defending Hindus against Muslims, for which he collaborated with the British. In contrast, Gandhi-Nehru fought for a free, multicultural and secular India where all communities would live on an equal footing 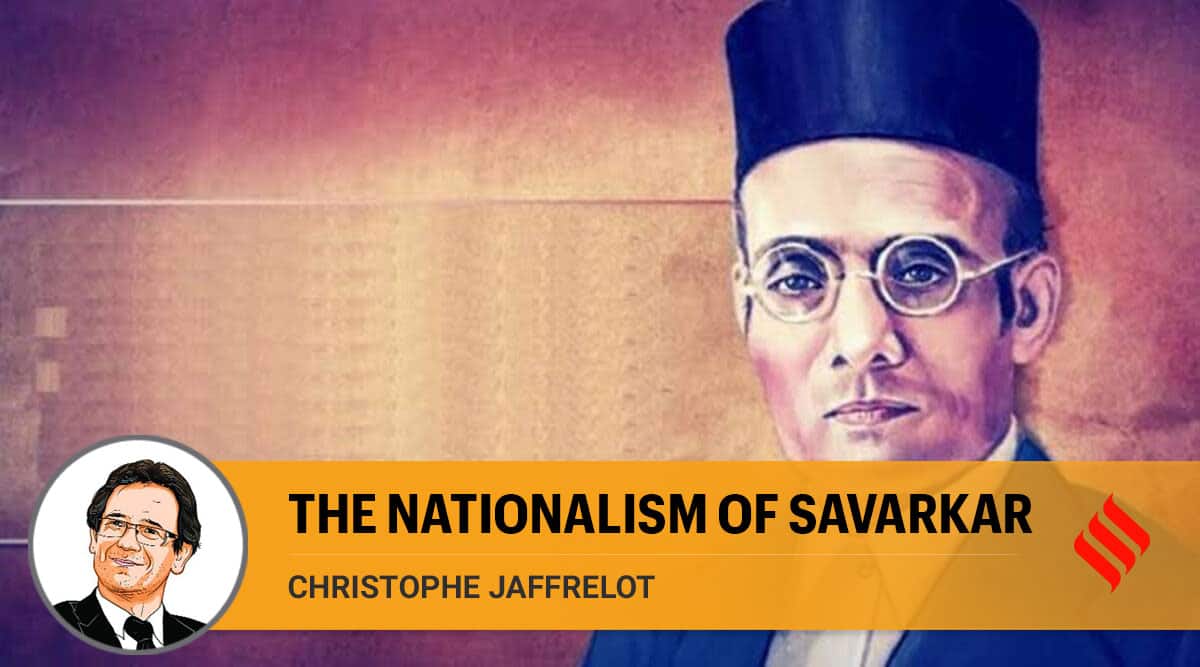 Savarkar retained the image of a nationalist because of the revolutionary commitment he developed as a young man, which resulted in his arrest in 1910. (File Photo)

The wave of historical revisionism that India is experiencing today finds expression in different kinds of misrepresentation of the past in textbooks as well as in public discourse. Jawaharlal Nehru is one of the main victims of this trend — either he’s erased from history or his role in the freedom movement and the making of modern India is distorted. Mahatma Gandhi himself, although the government continues to use him as an icon in India and, even more abroad, is not recognised any more as the chief architect of India’s fight for independence. Non-professional historians today claim that independence was won by those who took up arms despite Gandhi. Some of them consider Veer Savarkar and his disciple, Nathuram Godse, who feature prominently in a play I recently saw in London, “The Father and the Assassin”, as the real heroes. To know who Savarkar and Godse really were, one can read excellent books, including Gandhi’s Assassin by Dhirendra K Jha and Hindutva and Violence: V D Savarkar and the Politics of History by Vinayak Chaturvedi, both recently published in India. They help us respond to many questions, including the only one I’m interested in here — in what sense was Savarkar a nationalist as compared to Nehru and Gandhi?

Also in Opinion |How Savarkar fought for a casteless society

Savarkar retained the image of a nationalist because of the revolutionary commitment he developed as a young man, which resulted in his arrest in 1910. He was then sent to the Andamans and remained a prisoner of the British till 1937. After his release from prison, his main target became Muslims. This shift was evident from the many speeches he gave as President of the Hindu Mahasabha. By 1941, his main motto was “Hinduise all politics and militarise Hindudom”, which implied some collaboration with the British. The government of the Raj was recruiting Indian soldiers in the British army and for Savarkar that was a “unique opportunity to press on the movement for militarising our Hindu race”. He was in favour of “extending military cooperation with the British government […] to secure permanently a dominant position for the Hindus in the Indian army, navy and air-force wherein today the Moslems are almost monopolising…” He assured the viceroy that “no help the Moslems have given or can give to the government can ever outweigh the help which the government has already received and is sure to receive in future from Hindudom as a whole in India”.

Janaki Nair writes |Savarkar, a bulbul and the misplaced metaphor

Hindu Sabhaites toured the country requesting young Hindus to join the army and supported the war committees that the British had established in the Central Provinces and Bengal. Narayan Apte — Godse’s accomplice in the assassination of Gandhi — became an assistant technical recruiting officer and, in this capacity, took part in war services exhibitions. Savarkar, in the same vein, asked the viceroy to appoint 15 Hindu Sabhaites to the war advisory council.

The Hindu Mahasabha was extending support to the British in a very specific context. In 1939, the Congress, which was in office in more than half a dozen provinces, withdrew from these governments in protest against the British dragging India into World War II. More importantly, Mahatma Gandhi was preparing to launch the Quit India movement. Savarkar, as his biographer Dhananjay Keer points out, was against the Quit India movement. His priority was not independence, it was the fight against Muslims for which Hindus would need to occupy as many posts as they could in the army and in the state machinery. In October 1943, Savarkar made it clear again: “I once more exhort my Hindu sanghatanist comrades to capture as many places of vantage as possible in the political machinery of the land whether in the legislatures or in the ministries or in the executive council…” The Hindu Mahasabha tried to form coalition governments in several provinces, including in partnership with the Muslim League. In June 1943, Savarkar argued that in League-dominated governments, Hindu Sabhaites should “capture as many seats in the ministry as possible” and in Hindu majority provinces, “Leaguers or Moslems should, of course, be invited to join the ministry”.

Where were the so-called Congress “collaborators” of the British at that time? After the Quit India resolution was passed by the party on August 8, 1942, most of the members of the Congress Working Committee were arrested. Nehru, Sardar Patel, Maulana Azad and others stayed behind bars at the Ahmednagar Fort till June 1945. Their definition of nationalism was different: They fought for a free, multicultural and secular India where all communities would live on an equal footing. To force the British to Quit India was their priority and they succeeded by resorting, mostly, to non-violent techniques — a unique achievement in the history of the world. In contrast, Savarkar’s view of the nation was ethno-religious. True to the notion of Hindutva he had formalised in 1923, he wanted Hindus to prevail over other communities because, according to him, they were sons of the soil and recognised this land as their “punyabhoomi”. His priority, therefore, was to defend Hindus against Muslims and use martial power for the purpose. Hence his desire to collaborate with the British in order to learn from them the art of war and to occupy the seats of power they could offer their subjects.

These are the terms of the debates that could preside over intellectual conversations in order to expose historical revisionism. To live in history is not necessarily a bad idea, but to know the history one lives in is even more important.

Jaffrelot is senior research fellow at CERI-Sciences Po/CNRS, Paris, professor of Indian Politics and Sociology at King’s India Institute, London, and non-resident scholar at the Carnegie Endowment for International Peace

‘No proof of motive’: HC acquits three men who got life terms for DU student’s murder