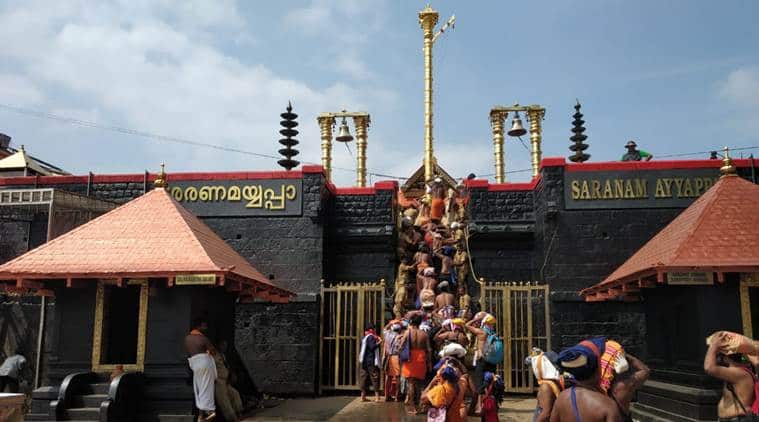 The Marxist government of Kerala is unleashing harsh measures against the Ayyappa devotees who are peacefully protesting, says Ram Madhav.

“The best lack all conviction, while the worst are full of passionate intensity.” In his 1921 classic The Second Coming, W B Yeats talks about the failure of the system, leading to anarchy all around. “Things fall apart, the centre cannot hold/ Mere anarchy is loosed upon the world/ the blood-dimmed tide is loosed, and everywhere/ the ceremony of innocence is drowned,” he laments.

An anarchy let loose by the forces of the state itself, people as mere innocent bystanders often subjected to repression and violence for the sin of believing in traditions and having convictions — this is Kerala today, courtesy the false zeal of the non-believing Marxist government, which forced a change in the temple tradition that nobody seemed to support.

The Marxist government of Kerala is unleashing harsh measures against the Ayyappa devotees who are peacefully protesting. The protesters include thousands of women. Hundreds of devotees have been arrested by the state government and hundreds more harassed on the streets, allegedly by the CPM cadres. All this in the name of implementing the Supreme Court order of letting women into the Sabarimala temple.

In Sabarimala, there is a tradition that women between the ages of 10 and 50 do not enter the shrine. What are the origins of this tradition? There are several versions and stories that answer this question, but no devotee in Kerala or elsewhere has ever objected to the practice.

It is believed that the god in Sabarimala, Lord Ayyappa, had given a commitment to goddess Malikapurathamma, from a shrine nearby that he would one day accept her proposal to marry when the first-time “kanni” swamis stop visiting his temple, and the goddess is waiting in a nearby temple for that to happen. But that hasn’t happened yet, as thousands of first-time swamis continue to visit the shrine, prolonging the goddess’s wait. Following in her footsteps, women in the age group of 10-50 years refrain from entering Ayyappa’s abode at Sabarimala.

Such traditions exist in all places, among all religions. They may sometimes look strange or out of place to outsiders. Some may want the old traditions to go. But then, unless the said traditions come in the way of public order and morality, the reform should be left to the practitioners themselves.  Opposition to this harmless tradition came not from any true devotee, but from those who explicitly proclaimed that they were non-believers and, hence, had nothing to do with that tradition directly. Their argument was that the tradition is against gender equality and hence regressive. They also hurled insinuations that the temple tradition treats women shabbily by calling them impure during the menstrual cycle.

What offended the people of Kerala the most are these nonsensical arguments. Kerala has innumerable temples, churches and mosques. It is a state with a rich tradition and practice of religiosity. The women of Kerala are the most religious and lead the way in following religious customs and practices. What infuriated them the most was the insinuation that there was gender inequality in Kerala and, by extension, injustice is being done to women.

Kerala is the only state, besides the Khasis in Meghalaya, that follows a matriarchal system. Women dominate family and social life in Kerala. Teaching them about gender equality is like carrying coal to Newcastle. But then, the over-zealous crusaders have little concern for the reality on the ground. That is what irks the people of Kerala — men and women alike — the most. Today, both men and women in equal numbers are on the streets protesting the efforts of the Kerala government to push women into the Sabarimala temple forcefully.

It is true that Article 14 to 21 of the Indian Constitution provide for certain fundamental rights of which the Right to Equality is among the most important. But these rights are personal in nature. In a similar vein, Article 25 to 30 provide certain rights to religious institutions too. Article 25, 26 talk about the Hindu religious institutions having the right to manage their affairs according to their customs and traditions. These rights too need to be kept in mind unless it is explicitly proven that they are in contravention of fundamental rights in a particular context.

In any political system, there is an unwritten agreement between the people and their government that each takes care of the other. The governor and the governed in a democracy are in a direct contract. But of late, we are witnessing a new phenomenon. Former British diplomat, Carne Ross, so eloquently writes about this phenomenon in his book The Leaderless Revolution: A growing number of political actors “who are neither politicians nor conventional political parties, nor accountable to anyone but themselves” are wielding enormous influence in policy-making these days.

Talking about those actors he says: “Such groups also contribute to a growing and unpleasant extremism in political debate. Adept at a one-sided presentation of the evidence, these groups advocate black-and-white positions with aggressive vigour and armfuls of one-sided research — often representing those who oppose them as foolish and sometimes evil. Facts and reasoned analysis are invariably the victims.”

This is precisely what is happening in Sabarimala debate. The ordinary people, the governed, are hapless as the political, media and NGO establishment in Kerala is pitted against them. Our politics and policy-making have been hijacked by middlemen representing various group interests.

It is nobody’s case to argue that traditions can’t change. The Kerala society has shown enormous resilience in this matter. With the motivation provided by Mahatma Gandhi, the then Maharaja of Travancore, together with many eminent people was at the forefront in the 1940s of opening the temples to all sections of Kerala society. Any reform, unless urgently required to be imposed from the top, should be encouraged to come from within. Else, we will be hastening the process of the “leaderless revolution”, where “ordinary people will take power and change politics”, as Ross puts it.