Rishi Sunak, the accidental prime minister of a nation in chaos

It took an economic meltdown, two prime ministerial resignations, lack of an electoral mandate, and severe economic privilege on Sunak’s part for multiculturalism to succeed Such is the significance of his identity as a British Hindu of Indian-African heritage that it is tempting to overlook Rishi Sunak as the fifth prime minister of an embattled, divided, island in less than six years. After all, racism in the UK runs so deep that it took an economic meltdown, two prime ministerial resignations, lack of an electoral mandate, and severe economic privilege on his part for multiculturalism to succeed. Given that he lost the previous leadership bid to Liz Truss despite demonstrating competence as pandemic-time Chancellor, the accidental nature of his rise is unlikely to be lost on Sunak.

But to understand the gravity of his rise and the choices he faces, there’s a need to locate Sunak at the centre of two interlocking political and economic dilemmas. Politically, Sunak needs to secure the support of the pro-Brexit, anti-migrant constituencies that don’t view him as an English “patriot”, thanks to his skin colour. Economically, he needs to strike the classic balance between welfare spending to alleviate an electorally salient cost-of-living crisis while augmenting support for big private business. Why these dilemmas? Because race and class are paramount fault lines in British national life and Sunak is a privileged minority on both counts.

Also Read |Rishi Sunak’s ascent is a breakthrough for diversity, with privilege attached

Indians who were escaping persecution in East Africa during the 1960s-70s and were welcomed in the UK, not only retained the wealth they earned and long-held hostility towards black Africans but also harboured gratitude for the British Empire that relocated them to Africa in the first place and eventually accepted them as British nationals long after the Empire was dead. Fitting with Margaret Thatcher’s vision of an “enterprise economy”, thanks to their financial resources, English-language education, and strong family values, these communities were identified by Thatcherite conservatives as a model minority that could yield long-term electoral dividends for the party.

From Sunak to former home secretaries Priti Patel and Suella Braverman, most — if not all — conservative politicians of Indian heritage come from this narrow segment of British society. That explains why Braverman believes that she’s a child of the British Empire, and dreams of deporting migrants. Despite the inhumanity of her aspirations, the geopolitical imprudence of her statement that stalled the Free Trade Agreement (FTA) with India, and the blinding hypocrisy of her wanting to deport people, she’s actually holding true to a twisted but deeply personal history that few others can relate to.

Sunak is no different. Private school educated, and literally richer than King Charles III, Sunak’s high-class upbringing ensured that he never truly faced the brunt of Britain’s race politics till now. His staccato first speech exhorting the need to unite the country and fix a “profound economic crisis”, though sincere, demonstrates the pressure he must be feeling as a non-white prime minister who could suddenly be reduced to being an “outsider” in his own home regardless of how he performs. As a racist Tory supporter said on national radio: “Rishi Sunak isn’t even British … I’m just telling you what Tory voters believe”.

The metric by which Sunak will be judged in the coming days, then, won’t be the same as it is for Boris Johnson, who lied his way into power, broke laws, and still plans to lead the Tories in the next general elections. It wouldn’t even be similar to Liz Truss who won a leadership bid without possessing a single quality that made her deserving of being in that position and lost it to preventable economic self-sabotage. Sunak will be blamed for failure as an outsider, despite being quintessentially British. What’s worse? He’ll rightfully become an icon of the success of British multiculturalism, igniting ambition among other ethnic minorities to dream of high office. But it’ll be a pyrrhic victory untethered to the need for collective racial justice.

For a moment, even if Sunak is somehow able to overcome the racial barrier, the class aspect will kick in hard. The white English working-class heartlands that are a priority for Tories and Labour alike — so much so that the Labour party doesn’t even bother with diversity at the top to avoid alienating these constituents — also desire a welfare system that works. Even if the fact that large parts of British welfare spending came from the European Union pre-Brexit is lost on this constituency, its (legitimate) demand for job security, reduced taxes, and a functioning healthcare sector militates against the public spending cuts that Sunak is offering.

Sunak’s support for Brexit, which had dried up European finance for the British welfare state, and plan for steering the UK out of the European Economic Area (EEA) without a domestic industrial cushion, or an international trading strategy to offset these losses (barring promises of FTAs that are yet to be signed), could become a long-term personal political liability. For someone who has probably never cooked a meal for himself, it’s rich to decide what and how much the country will eat for months to come and pitch that as a “hard choice”. Perhaps Johnson could pull that off thanks to his provenance in a racially stratified society, but not Sunak.

From this vantage, one is looking at economic hardship for most Britons in the coming months, and an impending electoral rout of the Tories. Sunak, perhaps, understands this best and can foresee Johnson’s recent statement that “this is not the time” for the latter to re-enter the leadership fray despite interrupting his Caribbean holiday as an ominous sign — a delayed tactic to dislodge Sunak as the party leader before the 2024 polls. And this is without factoring in the unrelenting (but deserving) political assault by the Labour party against the Tories at large.

Sunak needs to stabilise the economy to win over an electorate that hardly understands him, and whose struggles he can’t fathom. He has less than two years to do that before the success of British multiculturalism becomes what it probably is: An accident. That this is happening despite Chancellor Sunak’s success in keeping many Britons afloat and alive during the pandemic lays bare the structures of inequality that unite the kingdom.

(The writer teaches at SOAS University of London and is the author of My Enemy’s Enemy: India in Afghanistan from the Soviet Invasion to the US Withdrawal (New York: Oxford University Press, 2017) 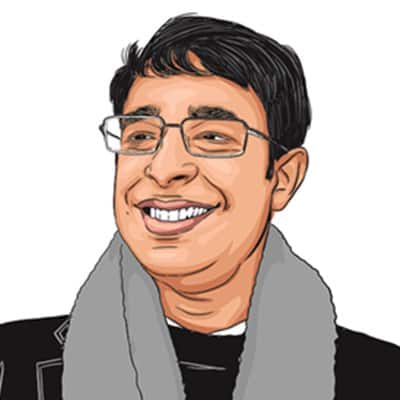 Avinash PaliwalThe writer teaches at SOAS University of London and is the author of <... read more