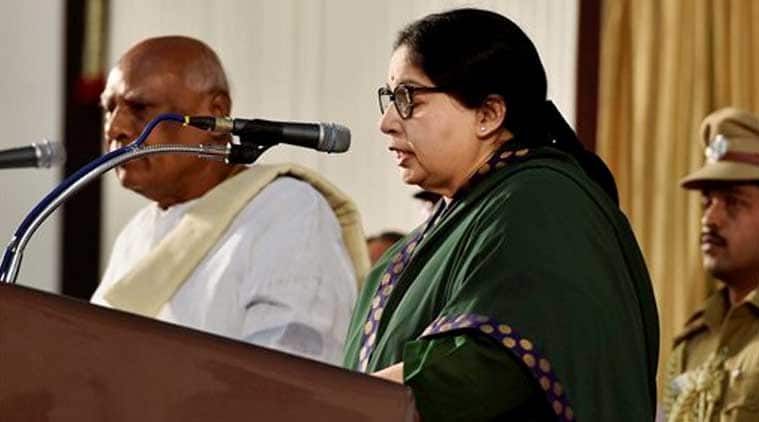 J Jayalalithaa taking oath as the Chief Minister of Tamil Nadu for the fifth time on May 23, 2015

As 1998 wore on, so did the Atal Bihari Vajpayee-led motley coalition government, despite endless differences among the allies. The biggest source of trouble, however, was J. Jayalalithaa, as proud, powerful and volatile a leader of Tamil Nadu and supremo of the AIADMK then as she is now. Today, her glory is at its peak after being sworn-in as chief minister for the fifth time. Over the years, she has alternated in this high office with her arch-rival M. Karunanidhi of the DMK. In the late 1990s, she was out of power in her state but had 18 totally loyal members in the Lok Sabha, whose support the BJP desperately needed. For offering it, her demand was that the Union government should withdraw all the criminal cases the provincial government of “the hated” Karunanidhi had filed against her. This was clearly something that the Constitution did not allow. So she constantly threatened to withdraw her support to the Vajpayee government. Whether she would actually do this, and if so, when, had become a guessing game. Within the Congress, the main opposition party, Sonia Gandhi’s advisors had managed to persuade her that the time had come to topple the fragile government.

Unfortunately for it, the BJP-led ruling coalition had little to commend it. On the contrary, it had given itself several black marks, most notably a campaign by some members of the ruling establishment against Christians, especially foreign missionaries. This led to an Australian missionary and his two sons being burnt alive in Odisha. The prime minister strongly condemned this barbarity but few were impressed. Most people believed that militants in the Sangh Parivar had their own agenda, as is the case now, when the BJP has a clear majority in Parliament and Narendra Modi is a stronger prime minister. In November, in assembly elections in several states and the Union territory of Delhi, the BJP fared badly. The Congress swept it out in Delhi and even more thoroughly in Rajasthan, one of two BJP strongholds in the region. In the second, Madhya Pradesh, the Congress unexpectedly retained control. This earned Sonia Gandhi kudos from the country, adoration from her party loyalists and lavish praise from the media.

On the last day of the year, the Vajpayee government handed an unexpected gift to all those determined to dislodge it by dismissing the chief of naval staff, Admiral Vishnu Bhagwat, at the insistence of the maverick defence minister, George Fernandes.

Things dragged on until the middle of March 1999, when the Vajpayee government celebrated its first anniversary with pomp and circumstance and became somewhat complacent. It was therefore shocked when Jayalalithaa did withdraw support to it and asked Vajpayee to secure a vote of confidence in the House — a call stridently endorsed by all opposition parties. When the BJP retorted that the opposition could table a motion of no-confidence in the government, the matter was taken to President K.R. Narayanan, who ruled that the government had to take a fresh vote of confidence to prove its majority. Though dismayed, the BJP had no option but to obey the president’s directive.

Having covered or closely watched Parliament since its inception as a “provisional” one on January 26, 1950, when the Constitution came into force (the first Lok Sabha was elected in 1951-52), I have never seen a parliamentary vote so tense and full of venom. Canvassing preceding it bordered on the abusive. On voting day, several stretchers were brought from various hospitals in different parts of the country into the Lok Sabha lobbies so that their ailing occupants could cast their votes in the critically important contest. One of the stretchers carried Rajmata Vijaya Raje Scindia of Gwalior, who had resigned from the Congress two years earlier to become a senior leader of the BJP.

When the votes were counted, the government secured 269 votes to 270 and lost by just one vote. Vajpayee resigned, but was asked by the president to stay until alternative arrangements were made. He used his oratorical skills to make much of the fact that all he needed was a single vote that 800 million Indians would surely provide him with.

The greatest irony in the situation was that the government might have survived if, at the very last minute, Jayalalithaa hadn’t persuaded another pugnacious woman leader, Mayawati of the Bahujan Samaj Party, to reverse her earlier decision to solemnly commit to the BJP the five votes she commanded.

In the Congress party, there was not just joy but exultation. The Congress president’s confidants were certain that her time had come, and that within a few days, “Soniaji would be sworn-in as prime minister.”

The writer is a Delhi-based political commentator

On the Loose: Career Call