C Raja Mohan writes: With China’s emergence as a major space power, there is a new urgency for democratic powers to come together to secure their national interests as well as promote sustainable order in the skies above. 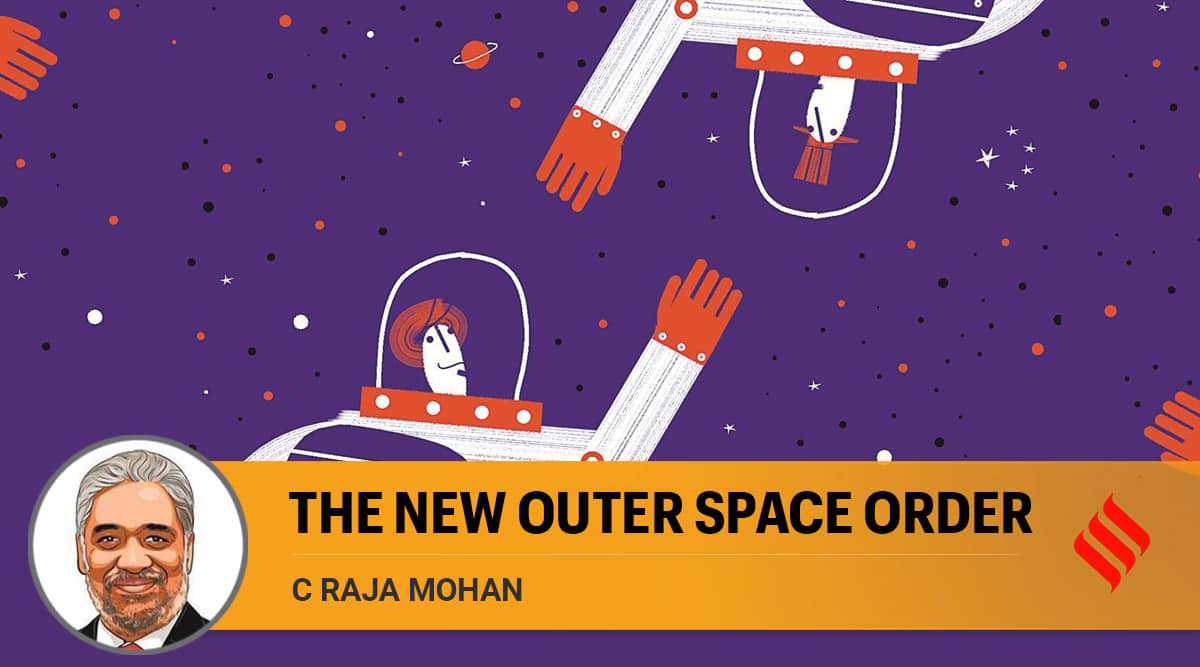 In opening new pathways for outer space cooperation with the US and Quad partners—Australia and Japan — in Washington last week, Prime Minister Narendra Modi has positioned India to engage more productively with a rapidly evolving domain that is seeing more commerce and contestation. Delhi’s new strategic interest in outer space is based on a recognition of two important trends. One is the centrality of emerging technologies in shaping the 21st-century global order. The other is about the urgency of writing new rules for the road to peace and stability in outer space.

The new emphasis on space cooperation is part of a much larger technology agenda outlined by India and its Quad partners. In the statement issued after bilateral talks, Modi and President Joe Biden called on India and the US to “continue and expand their partnership in new domains and many areas of critical and emerging technology — space, cyber, health security, semiconductors, AI, 5G, 6G and future generation telecommunications technology, and blockchain, that will define innovation processes, and the economic and security landscape of the next century”.

Technology cooperation has always been an important part of India-US relations. But it has been a boutique discourse between the relevant agencies of the two governments. As emerging technologies overhaul global economic and security structures, Delhi and Washington now have to widen the interface of technology. To be sure, official Delhi and Washington will have a critical role in facilitating technological cooperation in these advanced areas. But it is the commercial sector that must set the pace for progress within India. And cross-border collaboration among the Quad corporates will be critical in implementing the ambitious technological agenda outlined in Washington last week.

Technological progress in the last two decades has also “produced” new domains for human activity. One is “cyberspace” that drives so much of modern life and occupies so much policy and political attention around the world. But the emergence of “outer space” as a strategic domain is yet to get the attention it deserves in Delhi.

Although human forays into space began in the middle of the 20th century, the intensity of that activity as well as its commercial and security implications have dramatically increased in recent decades. As outer space becomes a location for lucrative business as well as a site of military competition between states, the salience of space cooperation between the Quad members is likely to increase in the coming years.

Until now, the maritime domain has dominated the strategic cooperation bilaterally between Delhi and Washington as well as within the Quad. The annual Malabar naval exercise, for example, began nearly three decades ago as a bilateral venture in 1992 and became a quadrilateral one in 2020 with the participation of Australia.

The idea of the Quad itself goes back to spontaneous cooperation between the navies of India, US, Australia and Japan in responding to the massive humanitarian crisis triggered by the Boxer Day Tsunami in the eastern Indian Ocean at the end of 2004.

The rise, fall and resurrection of the Quad is also intimately linked to the construction of a new maritime geography — the Indo-Pacific. The rise of China, the projection of its maritime power into the Pacific and the Indian Ocean encouraged the reimagination of the two oceans as a geopolitical continuum.

Last week’s talks in Washington present outer space as a new arena for space cooperation. At the bilateral level, Delhi and Washington have agreed to intensify space cooperation; and the Quad has set up a new working group to discuss space-related issues.

Until recently, outer space has been the sole preserve of states. But private entities are now major players in space commerce. At the same time, as space becomes a critical factor in shaping the military balance of power on the earth, there is growing competition among states.

The US has traditionally dominated outer space in the commercial domain. Its military competition with Russia set the norms in the security field. China’s emergence as a major space power — in both civilian and military — is reshaping astropolitics.

The dramatic expansion of Chinese space capabilities and Beijing’s ambition to dominate outer space have lent a new urgency for democratic powers to come together to secure their national interests as well as promote sustainable order in the skies above.

India, which has developed significant space capabilities over the decades, is a deeply invested party. The US recognises that it can’t unilaterally define the space order anymore and is looking for partners. The India-US joint statement issued in Washington highlighted plans to finalise, “a Space Situational Awareness Memorandum of Understanding that will help in sharing of data and services towards ensuring the long-term sustainability of outer space activities by the end of the year”.

Space situational awareness (SSA) involves monitoring the movement of all objects — natural (meteors) and man-made (satellites) — and tracking space weather. If you think this is stuff for video games, you are very wrong. Today, space is integral to our lives and disruption of space-based communications and earth observation will have serious consequences.

When signed, the agreement with the US on SSA will be the first of its kind for India. Washington has agreements with more than two dozen countries on SSA. The US and Indian delegations have also discussed a US initiative called the Artemis Accords — that seek to develop norms for activity in the Moon and other planetary objects. As commercial and military activity in outer space grows, the 20th-century agreements like Outer Space Treaty and the Moon Treaty (1979) need reinforcement and renewal.

Beyond the bilateral, the new space working group set up by the Quad “will identify new collaboration opportunities and share satellite data for peaceful purposes such as monitoring climate change, disaster response and preparedness, sustainable uses of oceans and marine resources, and on responding to challenges in shared domains”. The Quad leaders also promised to “consult on rules, norms, guidelines and principles for ensuring the sustainable use of outer space.”

The growing strategic salience of outer space demands substantive national policy action in India. Delhi has undertaken some reforms in recent years like letting the private sector participate in space activity. It has also taken tentative steps to cope with the unfolding military challenges in outer space. It has also initiated space security dialogue with close partners like the US, Japan, and France.

The scale of the challenges and opportunities in outer space, however, demand more urgent and sweeping reform. That can only be mandated by the highest political level. Back in 2015, PM Modi’s speech on the Indian Ocean focused national attention on maritime affairs. India could do with a similar intervention on outer space today.

This column first appeared in the print edition on September 26, 2021 under the title ‘The new outer space order’. The writer is director, Institute of South Asian Studies, National University of Singapore and contributing editor on international affairs for The Indian Express