The Quad is an important political signal. But it will be tested

Pratap Bhanu Mehta writes: It is consolidating at a moment when its grade on the three ‘Cs’ — Climate, Covid and Critical Technologies — is, from the point of view of the rest of the world, already a ‘C’. 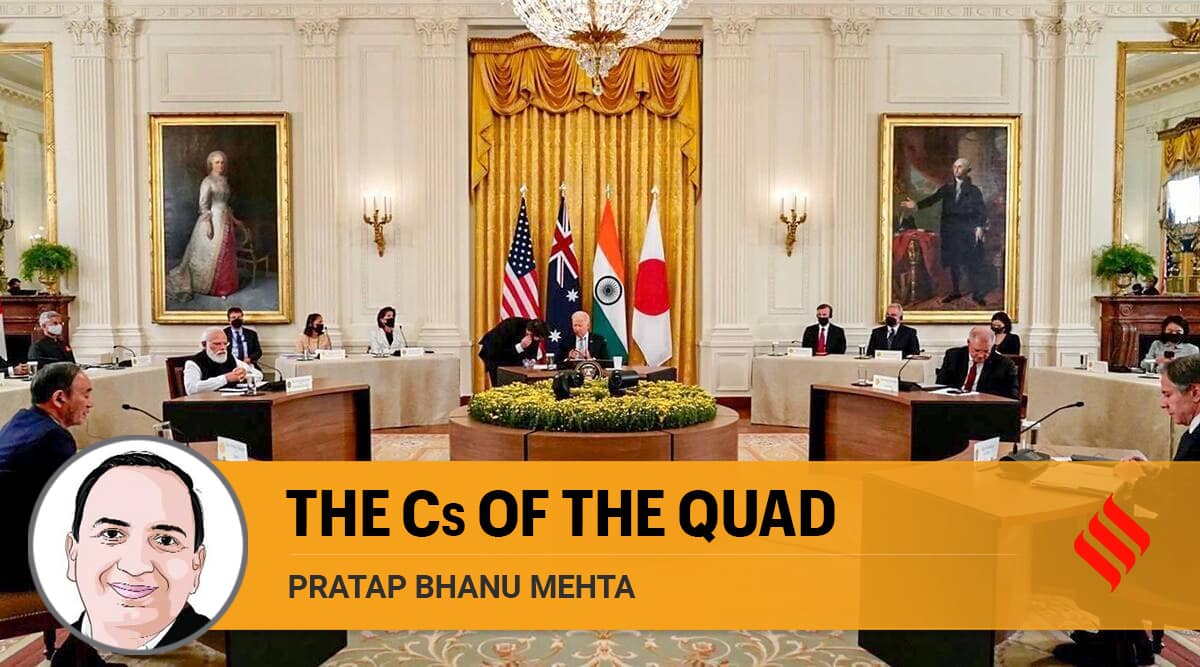 The consolidation of the Quad is an important political pivot in reconfiguring the Asian order. For the United States, it signals a commitment to remain engaged with the Indo-Pacific and lead a more coordinated effort to contain China. For India, the big political signal is that it is willing to be part of a group that will deny China the opportunity to upend what this group thinks is a world order based on principles of democracy, and a free, open and inclusive Indo-Pacific. For Australia, it is a clear signal that the die has been cast. China’s assertiveness has left these countries with no other option. The Quad is part of a churning of the security architecture in Asia. It will be more confrontational, with all the attendant risks.

The Quad’s innovative form is also supposed to reflect that churning. The value of most groupings is often not specific policies, but the socialisation it produces. The Quad is not an alliance. It aims to secure an open order in the Indo-Pacific, but it is not a full-fledged security pact. It is supposed to pursue broad goals: Humanitarian relief, climate change, vaccines, coordination on technology, securing supply chains, trade, and a general outlook on a democratic and inclusive world order.

First, the group has staked its claim on shared values. But it has to acknowledge the deep crisis of democracy in the constituent members challenged by plutocracy, ethnic division and dysfunction. The US has, at least nominally, acknowledged that its own democracy is not out of the woods. Indian democracy is struggling. Australia’s virtual abandonment of its own stranded citizens during Covid hardly burnished its credentials for a democratic humanitarianism. If being part of such a club can induce a deeper self-consciousness that the credibility of their democracies is the biggest asset of these countries to be preserved in law and deeds, it will be for the good.

Second, the Quad is aimed at the Indo-Pacific and is not a security alliance. Fair enough. But there needs to be more evidence that these countries are willing to listen or are attuned to each other’s security needs where it really matters. Australia may be the biggest beneficiary of the Quad. Japan has always been under the umbrella. But India’s biggest challenges are going to be its neighbourhood: Pakistan, Afghanistan, Iran and China. Biden’s decision to withdraw may have been the right one. But the manner signalled one abiding trait of US power: Its unwillingness to listen deeply to concerns and points of view that are not its own. It is to India’s credit that it has mostly stood its ground. But we should not be under any illusion that socialisation into the Indo-Pacific translates into more leverage in places where we need it most: In our neighbourhood or dealings with other powers like Russia, which is where the fate of the global order will be decided as much as in the Indo-Pacific.

Third, take critical technologies, supply chains and infrastructure. This group has the heft to do great research collaboration. It can help in further development of critical technologies, and can presumably coordinate some setting of global standards. In areas like cyber security, there is room for a great deal of cooperation, but whether the US will actually share its most advanced capabilities is an open question. But we have to be mindful of two caveats. First, this collaboration is happening just at the moment where both India and the US are turning more protectionist, are sceptical of global trade deals, and have some contradictory interests when it comes to shaping India’s development policies. Surely an open, inclusive and fair global order, one that also simultaneously reconfigures supply chains to reduce dependence on China, needs more engagement with a global trading order that includes more countries than another exclusive grouping. These countries also have the ambition to create an alternative to One Belt One Road by providing investment and loans.

But the blunt truth is that the US has long been gutting all the vehicles for doing this. Covid could have been a great opportunity for these countries to provide alternative development finance. Just to take one example, the World Bank has been systematically damaged and there is no big US push towards infrastructure investment or development financing. So there will be a lot more sound and fury in this area with few incremental gains.

Take Covid. In a way, these countries are coming to the table after having flunked the test once. Had India got its act together even six months earlier, it would have creamed the global vaccine assistance space. Now it will play catch up. But the stark truth of advanced countries hoarding vaccines and being tepid about ramping up production in the face of global shortages, often signalling, “we come first, the rest of the world be damned,” left a bad taste. If you are an Indonesia or an Africa or a Nepal, you would be right to worry whether the Quad is any more credible on this than China. Perhaps the Quad will learn from its mistakes. But it has already lost an opportunity to burnish its humanitarian credentials.

And finally there is climate change. This is where there is a lot of churning. Publics of more countries are paying attention to this; the technological options the world has have increased, and innovation is being harnessed. But it is an open question whether any of this will add up to enough to limit global warming to 2 or 1.5 degrees centigrade. But climate change is an issue on which there will need to be the greatest engagement with China, and Europe will be a big player. Arguably, the US and India will have sharper contradictions in this area, given the past record of broken commitments and lack of commitment to financing. The incremental gains from the Quad on the climate change issue will be marginal.

So the political pivot that the Quad represents may be welcome. But the Quad is consolidating at a moment when its grade on the three “Cs”, Climate, Covid and Critical Technologies is, from the point of view of the rest of the world, already a “C”. The Quad is an important political signal, whose effectiveness can be derailed by its material tepidity and institutional contradictions.

This column first appeared in the print edition on September 26, 2021 under the title ‘The Cs of the Quad’. The writer is contributing editor, The Indian Express