The security apparatus should be radically restructured in the light of the terror strike. CCTVs, quick patrol teams, drones and sniffer and tracker dogs on convoy routes could prevent similar attacks in the future. 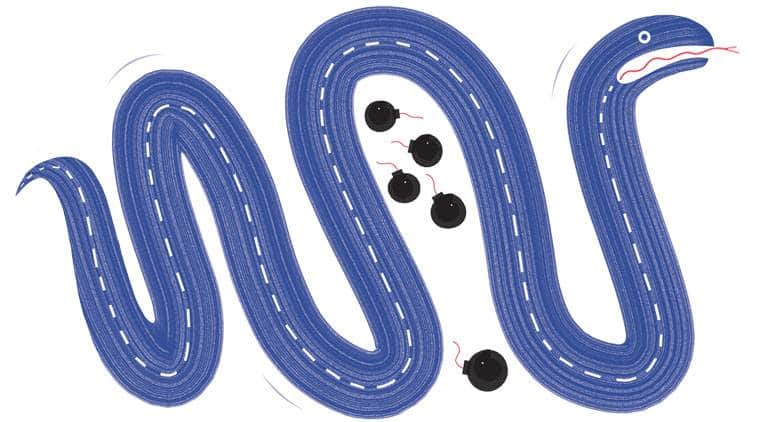 Though the inquiry will reveal the lapses that would need to be rectified, immediate steps need to be taken to avert a recurrence of such incident. (Illustration: CR Sasikumar)

The death of 40 Central Reserve Police Force (CRPF) personnel in a suicide bomb attack in Pulwama, Jammu and Kashmir, has shocked the nation, as it was unprecedented in recent times. An explosion of this magnitude was not ever presaged. The CRPF has already ordered a court of inquiry into the lapses that may have led to the disaster, and to rectify the shortcomings.

At the very outset, there can be no denying the fact that there has been an intelligence failure though the agencies claim to have sounded the security forces of a possible improvised explosive device attack. Such information without any specifics could not have been acted upon with the seriousness it deserved. Even an inkling of the possibility of an attack on the convoy could have put the road opening patrols and the officials manning the convoy on very high alert. Intensive checking could then have been carried out of all vehicles so as to intercept and avert any mishap. But for want of any specifics, it seems, the intelligence feed was not given the attention and seriousness it warranted.

Although the road opening patrols had sanitised the route of the convoy, they could not have prevented the civil vehicles from moving on either side of the roads. In this attack, the lone suicide bomber is believed to have come on to the highway from a village road and carried out his cowardly mission.

That a car with reportedly over 30 kg of explosives, possibly RDX, could move in the area undetected calls for some serious thought. He must have carried the explosive in the car for sometime before hitting the highway. This is where the intelligence failure comes into sharp focus. Where was such huge quantity of explosives stored before being loaded into the car? Southern Kashmir has been the hotbed of terrorism with many young boys joining the militant ranks in recent months. Intensive checking of vehicles and possible hideouts could have put breaks on their dirty mission.

That a long convoy of 78 vehicles with over 2,547 men had to move in the wee hours from Jammu is being questioned. Though the convoy was split for better command and control and to avoid bunching, they are reported to have got close to each other on nearing Lethpora. No doubt, the huge concentration of CRPF personnel in the transit camp due to a road blockade for quite a few days before the day of the incident may have dictated the decision. The government could have ferried them to Srinagar by Air Force aircraft and thus avoided a long convoy, which is more prone to attacks apart from the failure of command of the convoy commander. By no stretch of imagination could any convoy commander have exercised proper command and control over the fleet and personnel extending over quite a few kilometres considering the mandatory distance that needs to be maintained between each vehicle as per the Standard Operating Procedure.

In order to inflict heavy casualties, terrorists usually select a place for attack where the vehicles have to slow down due to a sharp bend or gradient. Such spots call for special attention by way of sanitisation. The suicide bomber chose such a spot where the vehicles slowed down and managed to inflict heavy casualties. Laden with what is suspected to be RDX, the terrorist is reported to have driven alongside the convoy for a minute or two before ramming into the CRPF bus and triggering the explosives.

Though the inquiry will reveal the lapses that will need to be rectified, immediate steps need to be taken to avert a recurrence of such an incident. At the cost of causing inconvenience to the general populace, all civil vehicles need to be banned from plying on the highway when military/paramilitary convoys are on the move. Ambulances and emergency service vehicles could be the sole exception to this rule.

In recent months, the CRPF along with the Army and the Special Operations Group of Jammu and Kashmir Police have carried out a series of successful operations against the militants and have wiped out a large part of the top leadership of terrorist groups. As many as 256 militants were killed in various operations in J&K last year, which has unnerved their bosses across the borders. That they have played a pivotal role in training the suicide bomber, procuring RDX and planning the attack is certain.

While intelligence agencies need to beef up their sources, the security apparatus calls for a thorough review. The Jammu and Kashmir Police is already planning to install CCTVs all along the 400 km-stretch of the highway, right from the entry point to the state in Lakhanpur in Punjab to Sonmarg beyond Srinagar.

Similarly, the extensive use of sniffer and tracker dogs could lead to recovery of explosives and even terrorists. The Belgian Malinois dogs presently being used by the CRPF in Chhattisgarh, Jharkhand and Odisha have proved their mettle by way of being instrumental in the recovery of huge quantities of explosives in various operations.

The writer retired as inspector general of police, CRPF

Telling Numbers: 1 in 7 Indians is an alcohol user, prevalence high in Chhattisgarh