With its occupation of Rail Bhavan, AAP moved from being media darling to media villain. 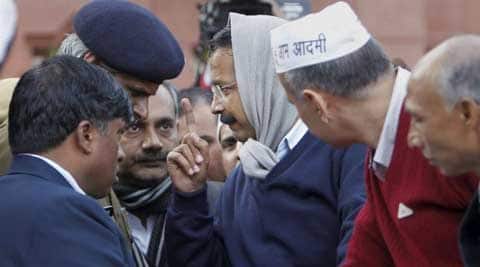 At the end of a bleak Tuesday, the dharna drama ended, not with a whimper, but unfortunately with a cough. As Arvind Kejriwal, standing tallest amongst his peers, completed his victory speech, he passed on the baton, sorry microphone, and covered his mouth for his trademark hacking. Sleeping out in the open, Monday night, may have been a TV marketing masterstroke but it was injurious to his health.

TV news, caught off guard by the sudden termination of the “police” protest where the AAP and Delhi Police ironically shared common ground outside Rail Bhavan, initially were with the AAP:  “Kejriwal has his way”’ (CNN-IBN, Headlines Today) as “Centre gives in to AAP” (NDTV 24×7). But the anchors and reporters were reluctant to hail Kejriwal as a victor: Headlines Today wondered whether this was a “face-saver”, Times Now, perhaps in view of the rain in Delhi, called it “a diluted face-saver”. Both channels questioned the “victory”: two police officers were sent on leave — was that all it took to send Kejriwal home?
By the time the news channels rolled out their big guns at 9 pm, the mood had turned cynical: “Total climbdown by AAP” (Times Now) was the most extreme judgement.

This scepticism on Tuesday evening mirrored the attitude of news TV throughout the AAP sit-in, sleep-in. News channels, arguably the AAP’s most ardent supporters — even admirers — since Delhi’s December assembly elections, had suddenly turned, like the proverbial worm. From Monday morning onwards, there were aggressive questions and more questions: “Dharna or Drama?” (CNN-IBN); “Do you agree with Kejriwal’s politics?” (ABP); “Everyone suffers from dharna” (or words to that effect, NDTV India); “Is this Kejriwal’s Lok Sabha gambit,” his “new game plan” (CNBC Awaaz)?

Debates on Monday night saw anchors (be it Barkha Dutt or Rajdeep Sardesai) target Delhi’s cabinet for taking to the streets and occupying them. Throughout the protest, TV reporters, while faithfully reporting the AAP point of view and the situation at Rail Bhavan, spoke of the “chaos” and the inconvenience caused to the “aam log” by the AAP log. By Tuesday, India TV was incensed: “Kejriwal ke 10 jhoot (Kejriwal’s 10 lies)”.

From media darling to media villain, Kejriwal was moved to protest, this time about the media: “What has happened to the media? Some are very good but some are playing the politics of the BJP and Congress,” he complained, almost petulantly.
The AAP has thus far enjoyed and used the media’s unbounded interest in it to its advantage. But while the footage of Kejriwal sleeping out in the open and of AAP members braving the elements and police restrictions was stirring, the plot began to unravel as time went by: restive supporters clashed with police, TV news highlighted the great public inconvenience of the protests and Kejriwal’s statements to TV channels became more strident, querulous. Demanding that four police officers be suspended ended up in a call to the public to openly oppose the police, for Delhi statehood, etc.

There was footage of the police kicking protesters, hitting them with their lathis, dragging them along the roads or felling them to the ground (News 24), but there was also footage of marauding protesters. The uncommitted viewer was caught between what seemed increasingly like a chaotic and uncalled for disturbance in the middle of the capital and the admiration for the AAP amongst some residents of Khirki Extension, where Delhi Law Minister Somnath Bharti conducted a “raid” (CNN-IBN).
And then there was the Congress, which had extended unsolicited and unconditional support to the AAP, openly criticising Kejriwal. Huh?

Given the different narratives playing out simultaneously, it was difficult for the perplexed viewer to decide who had won and who had lost on Tuesday evening. Still, the AAP had once again stolen a march on the BJP and the Congress. If last Friday was Rahul Gandhi’s “crown prince” speech day (Headlines Today) and Sunday was Modi’s rainbow effect (maybe because the sun struggled out in Delhi), the AAP was never out of the frame with ministers Bharti and Rakhi Birla sneaking in with their police encounters. On Monday and Tuesday, nobody sighted Gandhi and Modi. So whether the media likes him or not, they cannot ignore Arvind Kejriwal.

Not above the law