Poor swiped out in choice-less, not cash-less, society

For the poor, with little cash in the first place, digital promises to ‘swipe’ them out, before their marginalisation is even addressed. A woman takes rest next to a queue outside an ATM. (File/Express photo by Oinam Anand)

Demonetisation is, by its very nature, an autocratic, coercive step. The demonetisation of November 2016 has affected every single Indian. We are, as usual, persuaded to bear the pain and suffering, to “sacrifice” for the nation. The rhetoric continues but it now seems clear that the objective to root out black money has failed. Having failed to deliver the promise, the new goal post is to get rid of money altogether — to go “cashless”.

In a fait accompli, this government coerces us into a cashless world. For the poor and the marginalised, with little cash in the first place, this dark digital nightmare promises to “swipe” them out, before their marginalisation from the economy is even addressed. The “acche din” promise mocks at them.

Combining the digital medium with money and state support is lethal. It decisively removes choice. Work under the MGNREGA, access to the PDS, cooking gas or medicines from the PHC mandate presentation of an Aadhar card. Thousands stand in line to get access; the authorities, taking a cue from Nandan Nilekani, will claim people exercised choice by “voting with your feet.” The choice is stark — use these digital platforms or starve.

Some years ago, the poor were presented with a holy trinity — Jan Dhan, Aadhar and Mobile (JAM), to carry them from poverty to development. This move to cashless-ness has another combination; the trinity of government, banking and fintech companies.

But consider the practical challenges. Fewer than 10 per cent of Indians have ever used any kind of non-cash payment instrument. Approximately 50 per cent of the adult population does not have a bank account. One quarter of the Jan Dhan accounts opened still remain inoperative with a “zero balance”.

It is obvious that fintech companies need this state-supported coercion to get more people to use their platforms. But banks and companies do not even have the infrastructure or capacity to begin to deliver. The latest government report on financial inclusion, Overview and Progress on Financial Inclusion, says that, according to the 2011 census, among 24,66,92,667 households, the penetration of banking services is 58.7 per cent, at 14,48,14,788 households. Over 80 per cent of the

Less than three per cent of the value transacted in the year ending March 2014 used cards. Fewer than two per cent of Indians had used a mobile phone to receive a payment. According to an Akamai report, India lags far behind many nations in net download speed, behind even Nepal, Bangladesh and Iraq. India is ranked at 105th place globally in average bandwidth availability and 96th in terms of download speed.

In Rajasthan, Aadhar and biometric identification have already led to 30 per cent (about one lakh families) of eligible people not getting rations as well as lakhs disappearing from the social security pensioners list, many of those alive being verified as “dead”. A digital fiat de-recognises them altogether.

The poor have been going through this nightmare at great cost. Even their lives. Their cries of distress have been
ignored. Perhaps the last choice they have exercised is voting the present dispensation to power. Their invisible hard work — 94 per cent of India’s unorganised sector — has been completely derailed by cashlessness.

Meanwhile, any analysis, questioning or opposition, any protests against ideas or policy is dubbed anti-market, anti-development, anti-state, and finally, anti-national. However, the digital platform will trap every citizen within the most ordinary tasks; travelling, buying food, paying dues, accessing benefits. Travel won’t be possible without a UID number; metro stations will only work via Paytm, ration shops will go biometric — and cashless.

It is not cashless but a “choice-less” society that the present dispensation wants to impose on us. The attack on questioning and dissent heralded the beginning of the end of democratic processes. In a popular spoof on demonetisation online, the players who doubt the wisdom of demonetisation are silenced by just one word: “Soldier”. Indians have been quelled by two or three catchwords which silence questioning. These are “corruption”, “security”, “terrorism”. These words come out like those pellets we see used to silence peaceful street protest. When the truth is spoken, the fear of reprisal brings silence andmeek acquiescence.

Whatever might have been the real motivation behind the demonetisation edict of the prime minister, the undisputed windfall beneficiary has been the clutch of corporates dealing with digital money — the fintech companies. They were quick to thank the prime minister for his “vision” with full-page ads put out just hours after his announcement. The ruling party and government might not be able to face the brunt of the backlash when it comes. But the fintech companies, the banks, the IT sector and the mobile operators, indispensable service providers of digital platforms, with access to monopoly services provided by the state, have it rich. It is the combined death of the wisdom of common sense, democratic processes and economic rigour. 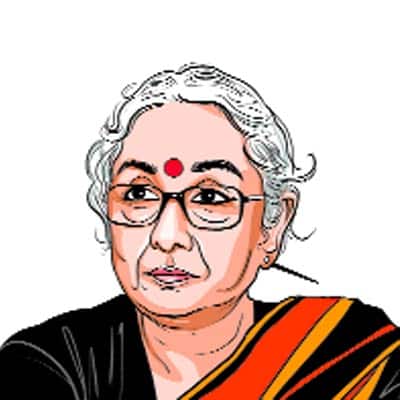 Aruna RoyThe writer is an activist based in rural Rajasthan.... read more