The project of portraying Modi as anti-Muslim fails the test of facts. At every step in his political and administrative career, PM Modi has done everything he can for the welfare of the community A shamelessly propagated myth is that Prime Minister Narendra Modi’s relations with the Muslim community are frosty at best, bitter at worst. Any contrary opinion is treated with disdain and ridicule. Having followed this subject closely for 20 years, I am convinced that this is the right time to break free from the shackles of false narratives.

The project of portraying Modi as anti-Muslim fails the test of facts. At every step in his political and administrative career, PM Modi has done everything he can for the welfare of the community. Yes, his style of working does not fit the conventional approach — it provides a refreshing alternative to how empowerment can be done without appeasement and tokenism.

It is not widely known that Modi’s house in Vadnagar was situated in an area where there were many Muslims. Some of his first and long-lasting friends are Muslims. When he was the chief minister of Gujarat, the two districts whose development indices shot up were Kutch and Bharuch. These are districts with high Muslim populations.

Kutch, among India’s western-most districts, was known for two things post-1947 – “registan” and “Pakistan” (the desert and a long border with Pakistan). Tourists would never go there. Officials would not want to serve there. But this was until Modi became CM. After 2001, Kutch’s agriculture flourished, industry came to the district, its coastal strengths were harnessed and it emerged as a vibrant tourist destination.

In Bharuch, the problem was law and order. Previous Congress governments and top Congress leaders allowed Bharuch to deteriorate. Children who grew up in the 1980s and ’90s in Bharuch can never forget the curfews there. Such a scenario prevented wide-scale development.

Friends in Gujarat, both Hindus and Muslims, often tell me about the efforts Modi made to develop key spots linked with the Muslim community. The Sarkhej Roza in Ahmedabad witnessed massive rejuvenation and restoration works under Modi as the CM. Modi visited the Sarkhej Roza on a few occasions, including once with former President APJ Abdul Kalam. Working closely with the ASI, the Ahmedabad Municipal Corporation worked hard to make the Roza and its surrounding areas better. Heritage festivals were initiated, making the Roza a vibrant cultural landmark in Ahmedabad. The Sidi Saiyyed Mosque also got a facelift. As PM, Modi also took the then prime minister of Japan Shinzo Abe to the mosque.Kutch is home to the Hajipir Dargah. Like all parts of Kutch, it faced massive infrastructure-related problems. Modi improved local road networks, enabling devotees to visit the Dargah.

As our PM, Modi has time and again showed that he is a leader of the entire nation. I can never forget PM Modi’s words at the Islamic Heritage Conference, organised in Delhi. He said (young) Muslims should be well-versed with the Holy Quran and the computer. His words have resonated across the community.

At the core of his leadership is respect for human dignity. PM Modi’s single step of abolishing the triple talaq has ensured that generations of Muslim women lead a better life. Likewise, the decision to allow women to proceed on Haj without mehram has been hailed a major step towards their empowerment.

PM Modi has also developed a close bond with the Dargah Ajmer Sharif. The 188 toilets constructed there have helped devotees, particularly women. There has been an extensive beautification process at the Dargah, which includes the construction of “Silver Katahra” at Astana Sharif, a new fountain and renovation of the Nizam Gate and Akbari Masjid. Cleaning machines have been placed at the “jhalra” at the iconic palace and a water tank with a capacity of three lakh litres has been constructed. Besides, PM Modi has been offering “chadar” at the dargah of the Sufi saint Hazrat Khwaja Moinuddin Chishti in Ajmer Sharif for the last six years. This is a clear reflection of his respect and obeisance to all deities and Sufi saints.

For the last many years, it has become fashionable among some sections to hate Narendra Modi. My humble question to them is: When will you stop?

After 2002, the Supreme Court of India took over most of the probes. The Nanavati Commission was formed, there was an SIT in front of which Modi himself deposed for hours. The findings of the Commission and the SIT are in the public domain. Yet, there is a refusal to believe any of these findings.

There have been many analyses of the Modi-led foreign policy but one facet that stands out is the excellent relations with the Muslim world. Bahrain, the UAE, Palestine, Saudi Arabia and Afghanistan have conferred on him their top honour. The crown princes of the UAE as well as Saudi Arabia have strong personal friendships with the PM. Can anyone forget PM Modi’s special visit to the grand mosque in the UAE? Can we forget the PM paying obeisance at Bahadur Shah Zafar’s mazar?

Today’s Muslims, especially the younger ones among them, are fed-up with vote-bank politics. Vested interests took away their votes and scared them but delivered nothing. The community wants prosperity and opportunity. It is high time the old “shopkeepers” of vote-bank politics shut shop. In a new India, it is aspiration and inclusion that will speak. Modi has made a start. It is up to us to support him and nurture this great nation that has given us so much.

This article first appeared in the print edition on October 6, 2020 under the title “Empowerment, not tokenism”.  The writer is president, Dargah Committee, Dargah Khwaja Sahab, Ajmer 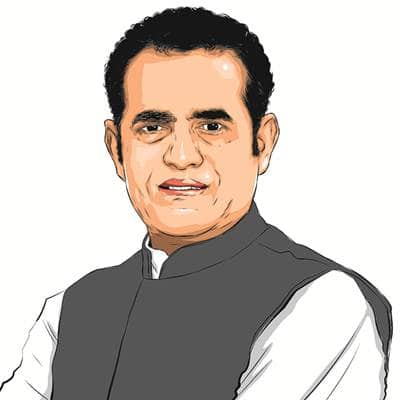