P Chidambaram writes: Will Hindi and Hindu own India? 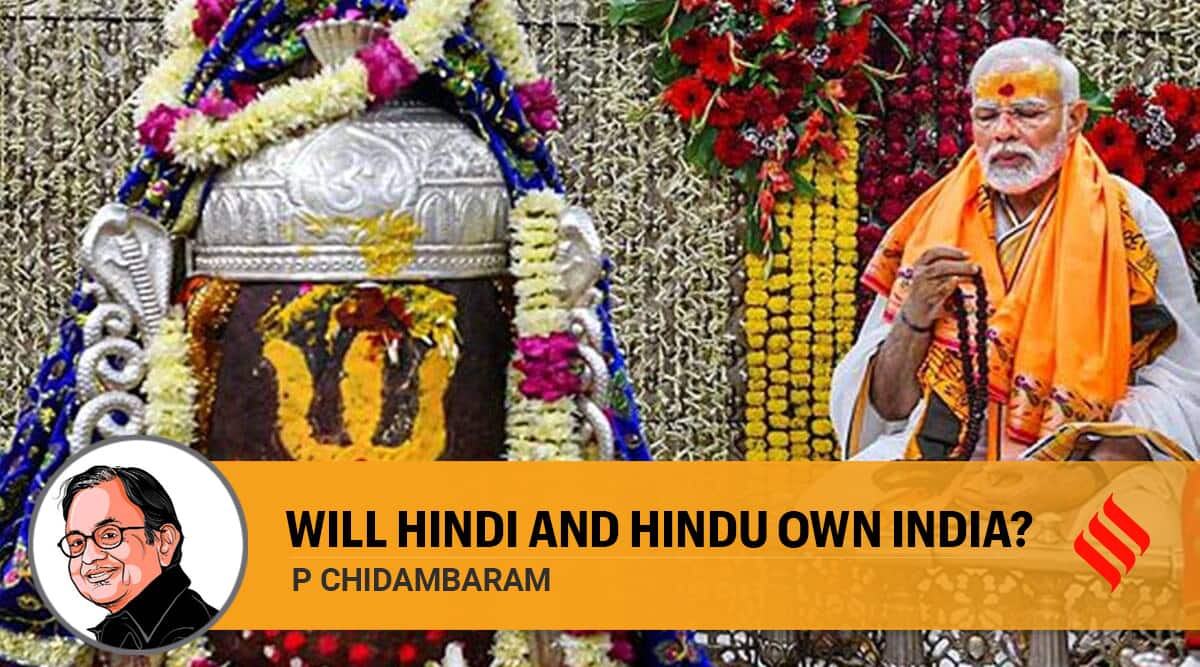 On October 11, 2022 Mr Narendra Modi was in Ujjain to inaugurate the new 900-metre corridor at the Mahakal temple in Ujjain, Madhya Pradesh.

Mr Modi is a devout Hindu. Most Indians are devout Hindus. Most others who are not Hindus are equally devout to another faith. When he went to the Mahakaleshwar temple, Mr Modi offered prayers and performed the rituals, and every minute of that was dutifully telecast live by all the channels that I surfed. At the sanctorum, he was draped in a golden angavastram and a saffron scarf. He had sandalwood paste on his forehead and a big tilak. When he addressed the gathering (I suppose nearly all Hindus), it was obvious that he had prepared well. He recalled the ancient cities and their great temples located all over the country. He quoted from Sanskrit scriptures. He spoke at length on the significance of Shiv bhakti. It was not clear if he had memorized his lines or he had a tele-promoter before him (hidden from the TV camera). Whichever it be, it was a virtuoso performance.

Read in Explained |Mahakal temple in Ujjain: Why it holds special significance in Hinduism

It was not a routine inaugural speech. It was what is called a pravachan, a spiritual discourse by a Hindu preacher to an all-Hindu audience that loved every word. Mr Modi said that India was on a spiritual journey and “we are restoring the spiritual glory of India”. He concluded his speech with the ‘Jai Jai Mahakal’ chant several times and the audience repeated the chant with great fervour.  The message was clear. The India in Mr Modi’s pages of history was a Hindu India and the India of Mr Modi’s dreams will be a Hindu India.

Everything seemed picture perfect. The only discordant reminder was that Mr Narendra Modi is not a private individual but the Hon’ble Prime Minister of India — a nation that is made up of Hindus (79.8 per cent), Muslims (14.2), Christians (2.3), Sikhs (1.7) and Others (2.0) — and he is obliged by the Constitution of India to act and speak for all the people of India. The India of the last 2,000 years was built, and the India of our dreams will be built, by every Indian regardless of his/her faith. That is why the Constitution stressed ‘equality’ and the Constitution was amended to explicitly stress  ‘secularism’ that was always implicit in a Republican document.

While the Prime Minister was celebrating the Hindu faith, the Home Minister was quietly pushing the Hindi language. The Home Minister is the ex-officio Chair of the Committee on Official Language. Its 11th Report was presented to the President on September 9, 2022 and kept under wraps — until The Print broke the story about its contents. The contents will certainly cause reverberations in the non-Hindi speaking states of India.

Look at the main recommendations as reported by The Print: