Dagger in the heart of liberty

P Chidambaram writes: The Home Minister verbally assured the Rajya Sabha that the techniques prohibited in Selvi will not be employed, but refused to incorporate the assurance in the Bill... The government resorted to the usual binary arguments: If prisoners have human rights, so do victims. The Bill is not about victims but about arrestees, detenus and prisoners 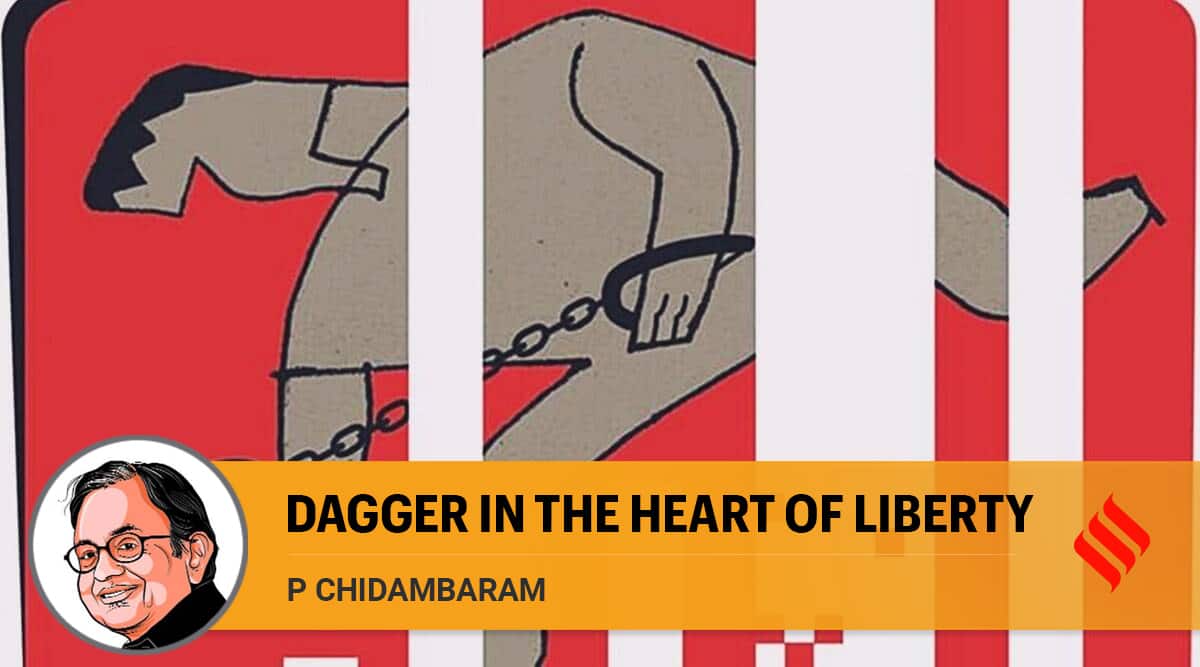 Liberty is a non-derogable human right. Erosion of a human right is the starting point of its extinguishment. The Bill is a dagger plunged into the heart of Liberty.

In Selvi vs State of Karnataka (a judgement of three judges on May 5, 2010), the Supreme Court considered the Constitutional validity of three tests conducted against the will of a person: Narcoanalysis, polygraph test and Brain Electrical Activation Profile (BEAP).

The Court came to the following conclusions:

In K S Puttaswamy vs Union of India (a judgement of a 9-judge Bench), the Supreme Court held:

“An invasion of life or personal liberty must meet the threefold requirement of (i) legality, which postulates the existence of law; (ii) need, defined in terms of a legitimate State aim; and (iii) proportionality, which ensures a rational nexus between the objects and the means adopted to achieve them.”

In delivering the historic judgements, the Court was performing its paramount duty of being the ‘sentinel on the qui vive’.

The judgements in Selvi and K S Puttaswamy are still good law. Not, it appears, for the present government of India. If it had realised that the judgements were binding on the government, based on non-derogable constitutional rights (Articles 20 and 21), the government would not have introduced and passed the Criminal Procedure (Identification) Bill, 2022. The Bill is a brazen attempt to overreach the Supreme Court and to deny the fundamental rights to liberty and privacy, two of the most precious rights in a democracy.

The purpose of the Bill was to expand the ambit of persons covered under the law; use of modern techniques for taking body ‘measurements’; and provide legal sanction thereto. The purpose is unexceptionable, the mischief lies in the provisions. There are many legal infirmities in the Bill, but let me focus on four sections which violate the two precious rights of liberty and privacy.

S.2: There is a definition of ‘measurements’. It includes biological samples and their analysis, behavioural attributes or such other examination/tests (referred to in Ss. 53, 53A and 54 of the Code of Criminal Procedure). There are no exclusions.

S.3: Measurements can be taken from ‘any person’ that includes a person convicted of an offence punishable under any law, a person ordered to give security for keeping the peace, a person arrested under any law and a person detained under any preventive detention law. It is shocking that every law is covered and it is more shocking that an arrestee and detenu are clubbed with a convicted person. The section undoubtedly includes any protester who may attempt to cross a police barrier where S. 144, CrPC has been promulgated!

Questions: Is there any MP, MLA, political worker, trade unionist, student leader, social activist or progressive writer or poet who has never been arrested and who can claim that he will never be arrested? (On the day I joined the Youth Congress I was arrested, along with others, for demonstrating near the statue of Minto in Chennai!).

S.4: The measurements will be stored, preserved for 75 years and can be shared with any ‘law enforcement agency’. Mark the words, it is not an agency investigating a crime. An authority such as a panchayat or municipal officer, a health inspector, a traffic constable, a tax collector and numerous others enforce some law or other — and they will be entitled to demand and be given the measurements.

Question: In the absence of a definition, who are the law enforcement agencies mentioned in the section?

Question: Will measurements be taken against will and without the consent of the person concerned?

The Home Minister verbally assured the Rajya Sabha that the techniques prohibited in Selvi will not be employed, but refused to incorporate the assurance in the Bill. The other three questions remained unanswered. The government resorted to the usual binary arguments: If prisoners have human rights, so do victims. The Bill is not about victims but about arrestees, detenus and prisoners. The other argument was, look at our low conviction rates. Of course, look at them, but the low rate is because of negligent investigating officers, poor quality prosecutors, shoddy record-keeping and over-burdened judges. These constraints will not go away by violating the human rights of arrestees, detenus and prisoners.

Liberty is a non-derogable human right. Erosion of a human right is the starting point of its extinguishment. The Bill is a dagger plunged into the heart of Liberty.