One year of Modi govt: India Inc, be patient

There is significant behind-the-scenes activity to improve ease of doing business. Overall, the Modi government has covered a fair deal of ground. The pace and intensity of reforms may have disappointed sections of India Inc, but one must factor structural bureaucratic challenges and fierce political opposition. (Illustration by: C R Sasikumar)

Prime Minister Narendra Modi has just completed a year in power and he has been able to achieve a fair amount in that time. His Make in India campaign has set the tone for transforming India into a global manufacturing hub; the Jan Dhan Yojana has taken financial inclusion to the heart of rural India; the Swachh Bharat Abhiyan has put cleanliness on the top of the nation’s agenda; and his Digital India initiative has laid the groundwork for a digitally empowered society and knowledge economy.

Importantly, Modi has arrested the policy paralysis that had hit the nation and brought in a new dynamism to the corridors of power. The government has demonstrated its commitment to convert intent into action through various measures aimed at opening up the insurance sector, lifting controls on diesel pricing, bringing transparency into the allocation process for natural resources, such as coal, addressing the menace of black money, holding successful telecom spectrum auctions and making progress on tax, land and labour reform.

The government’s initiatives have revived global investor confidence in the India growth story. Data from the Centre for Strategic and International Studies shows that during the last year, January 2014-15, US-India bilateral trade rose by over 4 per cent, FDI jumped 40 per cent and FII inflows soared 400 per cent.

The positive change in investor sentiment is also an outcome of Modi’s efforts to take the resurgent India story to the global stage. From Washington to Paris, Tokyo to Sydney, the PM has travelled extensively to convince foreign businesses about the immense opportunity offered by this billion-strong market. Today, Brand India is shining again.

In order to improve business sentiment and spur investment by domestic as well as overseas players, the government has been trying to bring in key tax and land legislation. The introduction of the goods and services tax (GST) could be a game-changer. By replacing a plethora of federal and state taxes, the GST will remove tax distortions and facilitate business potential. Similarly, the Modi government’s land bill aims to make the acquisition of land for infrastructure projects easier by moderating some of the restrictive provisions in the previous land acquisition law of 2013. This will, in turn, boost manufacturing and job creation.

Through the new land bill, the government has taken an approach that balances the interests of farmers and the ease of land availability for development projects. The proposed law increases the likelihood that landowners will be compensated fairly, not only in terms of their land but also in terms of their jobs and livelihood. It seeks to not only ensure compulsory employment for one member of the family affected by the land acquisition, but also proposes a hassle-free grievance redress mechanism for them. However, political partisanship has resulted in these two key pieces of legislation getting stuck in Parliament.

On financial inclusion, especially in rural areas, the Modi government has made rapid strides with 12.5 crore accounts having been opened under the Jan Dhan Yojana. This initiative is not only helping bring a large swathe of Indians into the financial mainstream but will also allow the government to directly transfer welfare payments to intended beneficiaries. The government has also, in a relatively short period of time, launched schemes aimed at providing life insurance, accident insurance and pension to those outside the social security net. Here, the Jan Dhan Yojana will facilitate the collection of monthly charges and premiums for these schemes.

What is unique about these social inclusion schemes is that they have been carefully engineered to introduce a greater sense of stakeholder ownership among beneficiaries while reducing the burden on the exchequer.

There are some other small yet significant steps that the government has taken towards the goal of ensuring stronger, more inclusive growth: the Adarsh Gram Yojana that tasks parliamentarians with establishing model villages and the Skill India campaign aimed at providing training and skill development to 500 million youth of our country by 2020, covering every village. In rolling out these initiatives, the Modi government has shown that it understands the aspirations of a new India that wants a hand up, not handouts.

While the government has walked the talk in most areas, there are some where it could and should have done more.

The biotech industry is worried about the government’s failure to embrace this new technology and bring in transformative change. Despite assurances from the government, the meetings of the Genetic Engineering Appraisal Committee (GEAC) haven’t been happening. These meetings are extremely important to enable field trials of GM crops, which can raise agricultural productivity. Indeed, biotechnology presents an unprecedented opportunity to ensure food security along with the economic wellbeing of farmers.

Similarly, the government is yet to provide the necessary policy push for a cohesive pharma research and development ecosystem to innovate new drugs. By lending support to the local pharma industry’s capital investment needs, incentivising R&D investments and providing significant tax exemptions for innovation, the government can enable a culture of “Innovate in India”. Also, despite the intent within government to create an integrated healthcare system to ensure affordable and accessible healthcare for all, the allocations to healthcare in the last two budgets have been anything but encouraging.

Overall, the Modi government has covered a fair deal of ground in a year’s time. The pace and intensity of reforms may have disappointed sections of India Inc, but one must factor structural bureaucratic challenges and fierce political opposition. One must also keep in mind that a lot of unrealistic expectations were built around Modi’s ability to fix the Indian economy overnight. That is why the NDA’s achievements in the first year are being measured against the same yardstick typically reserved for governments that have served a full term. This is unfair. It also means that the government needs to do a better job of managing expectations.

India Inc, for its part, needs to be patient with the Modi government’s long-term roadmap of incremental reform. I am aware of significant behind-the-scenes activity to improve the ease of doing business in the country. Greater engagement between the government and the private sector will ensure that the policies unveiled are truly enabling in nature. It is time that the government, opposition and corporate India were aligned in pursuit of the development agenda.

The writer is chairman and managing director of Biocon Limited, a biotechnology firm 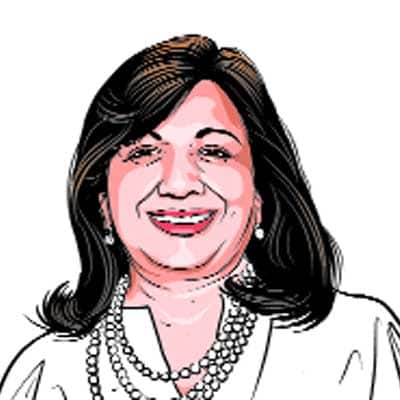