Shivani Naik writes: At the heart of this debate is women’s free choice — to compete feeling comfortable, feeling not being ogled at and feeling good about their game. 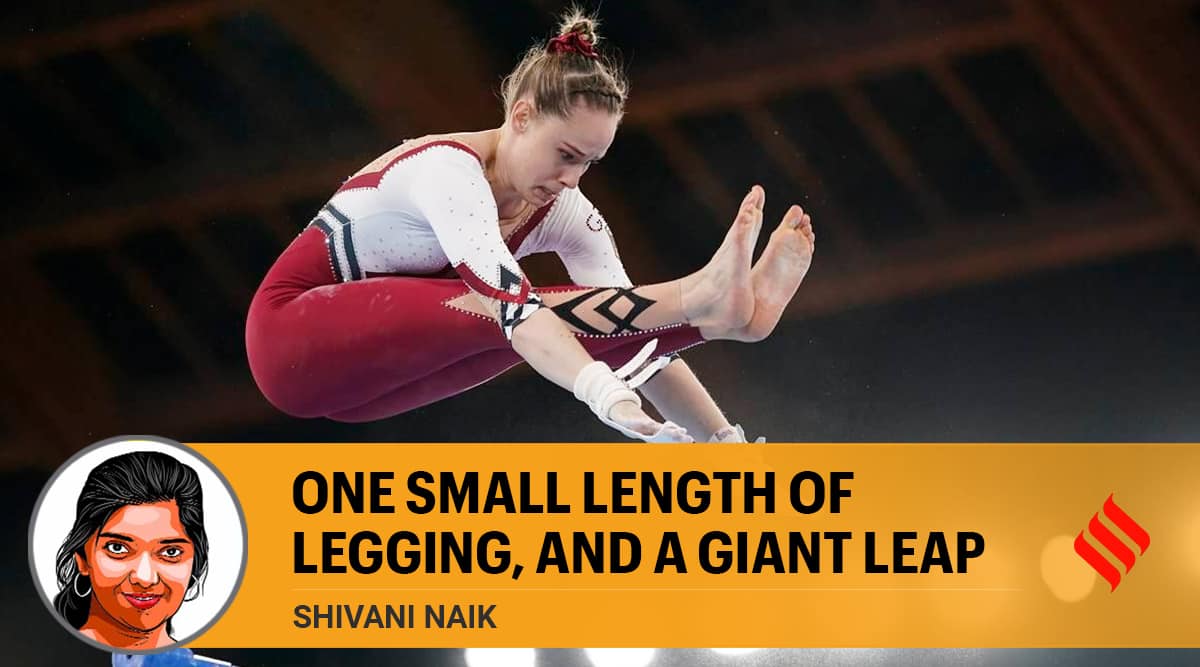 Sarah Voss of German gymnastics team, that wore unitards instead of bikini-cut leotards, at the Tokyo Olympics, seeking their right to wear what they want. (AP Photo)

In an ideal world uncontaminated by overzealous sports officials, their only mandate over what women should wear in sport would extend to choosing colour schemes of the polyester medal ribbons. And in ensuring every athlete with jelly ligaments has proper taping. Like, not leave India’s top woman wrestler Vinesh Phogat rudderless without a physio, if she had a strong chance of getting a medal.

Sports policing of athlete outfits could focus on ensuring that sneaker soles and spikes or swimsuits don’t accord undue advantage on the track or the pool. But exceeding their brief, sport’s officialdom decides that it will not only have an opinion but also air it, on what women will wear when they compete.

German gymnasts gave it a long, hard thought over this summer, and decided they will not take on additional pressure of discomfort wearing bikini-cut leotards at Tokyo Olympics. Instead, they opted for unitards, which incidentally are not a novelty for those watching. Men have always been wearing them.

Smart ankle-lengths and long-sleeved gear in cherry red, with geometric patterns for a yoke, and a snazzy tattoo pattern at the ankle which accentuated the pointed toes — the design that German gymnasts sported merged aesthetics with acrobatic comfort.

Beyond Germany, woman gymnasts in Europe have rebelled this Fall against the unspoken tradition of wearing leotards that are highly sexualised and minutely photographed from uncontrollable angles while women are flinging themselves in the air, and chosen to be more concerned about sticking landings and not breaking their necks.

German Elisabeth Seitz nailed her uneven bars routine, but not before declaring: “We wanted to show that every woman, everybody, should decide what to wear. On competition day, we will decide what to wear.” For a sport that has not quite completely resolved yet the traumatised fallout of a sexual abuse scandal in the US, the apprehensions of the Germans were not imaginary.

Elsewhere, the European Beach Handball governing body showed some remarkable thickness in imposing fines on the Norwegian team for turning out in shorts instead of the mandated bikinis. The stipulations are so outrageous that, after 15 years of disapproving, the players couldn’t bother less, and their home federation didn’t think twice about shelling out the ridiculous fines on their behalf.

Sample the stupidity as fleshed out by The New York Times: “Women must wear bikini bottoms ‘with a close fit and cut on an upward angle toward the top of the leg’, and those bikini bottoms cannot be longer than 4 inches”. The corresponding men players could “wear shorts at least four inches above the knee, provided they are ‘not too baggy’”.

Beach volleyball women’s players are split on the topic of whether shorts ought to be allowed, with practical considerations of sand clinging to the pockets.

The entire Muslim world with its women athletes bounding out to participate in every sport possible, meanwhile, is grappling with the skittish issue of why women wearing a hijab — or not, as the case may be — is anyone else’s concern.

Egyptian beach volleyball player Doaa Elghobashy has competed at the Games for a decade wearing ankle-length tights and a head scarf. Smashing an unreturnable spike gives her immeasurable glee. Watchers should try following the sport, she reckons.

Serena Williams was wearing a baby literally when she won an Australian Open. The French crinkling their noses at her bodysuit was plain bad form.

At the heart of this debate is women’s free choice — to compete feeling comfortable, feeling not being ogled at and feeling good about their game.

As a corollary, women do not want to be judged for indulging in fashion on their Big Competition Days either. Painted nails, pretty braids of wrestlers, hair parted two-ways for the sprints, dyed a flaming red to streak on the track, an aura of curls and stylised flags on running tights, lipstick and eye shadow — the tyranny of the trudging tracksuit ended a while back.

Tokyo’s newest contrivance from the broadcasters zoomed in on swimmers — both male and female — as they wrapped up their swims with limber downs in outdoor showers. But the roving gaze of cameras while athletes compete isn’t the only problem. Outdated marketeers insecure about selling their sport, and untrusting of every sporting discipline being capable of producing exciting match-ups, has led to years of dress diktats from the suits. Defiance was long due when women knew in their bones that they could compete just as well without this skin-showing compulsion, that in fact dissuaded many budding careers after puberty hit and body image issues cropped up.

The talent oozing out of Tokyo’s badminton women’s singles final between Tai Tzu Ying and Chen Yufei was so mesmerising that you didn’s notice that the two had turned up in shorts. Badminton had once contemplated a compulsory skirts rule. The current golden generation emerged right after the dress-code was summarily dumped.

Skills, not body-hugging skins, were enough.

This column first appeared in the print edition on August 8, 2021 under the title ‘One small length of legging, and a giant leap’.

Hope & hunger: Why seven medals in Tokyo add up to a lot more