After the economic Armageddon of 2020, is recovery finally on the cards?

🔴 Bindu Dalmia writes: Despite risks, the chances of an investment-driven economic revival for India are high. As we begin the new year, to what extent is there an economic feel-good factor? I am inclined to see the glass as half full two years after the economic armageddon of 2020.

The economic optimism is fuelled by the “balance of risk being tilted towards the lower side”, despite the Omicron surge denting the fourth-quarter expectations, as also due to a confluence of five tailwind factors that are expected to augment a sustained investment-led recovery: The improved asset quality of banks due to speedier recovery and adequate bank capitalisation; increased profitability due to domestic demand and deleveraging of corporate balance sheets; the government’s sustained focus on reforms and public investments; robust foreign investor interest in India; and the 37 per cent surge in export growth in the third quarter.

The onset of virtuous economic cycles is always presaged by predictable demand in domestic consumption and the increase in global merchandise trade that holds the maximum weightage in GDP. This is expected to push average capacity utilisation from 60 per cent in June 2021 to 75 per cent by FY 2023. Higher demand means optimal capacity utilisation by industry, increased profitability and better employment rates.

India’s total investments equal 30 per cent of GDP, of which the corporate sector including non-finance companies, account for 13 per cent, while the government accounts for another 17 per cent. With improved profitability and debt-to-equity ratios of the 2,800 listed companies, corporates are expected to channelise improved cash flows towards investments as demand reflates towards the latter half of FY 2022-23.

The investment push through the 13 production-linked incentives, whether for export promotion or import substitution, as well as the recent policy-induced thrust of a Rs 76,000 crore plan to foster a semiconductor ecosystem to ease supply-chain impediments, will begin to increase the size of the economic pie over the next five years. Should these assumptions play out, we could be within striking range of the RBI’s projection of 9.5 per cent growth in the current fiscal year, and the finance ministry’s target of 7 per cent average annual growth for the next few years.

In times of extreme volatility, uncertainties, complexities and ambiguities, there are no textbook prescriptions to aid decision making. The post-Covid world will continue to throw up newer threats and opportunities, like rapid digitisation, increased market for renewables and electric vehicles. This could translate to an environmentally-sustainable recovery. Businesses must be flexible and be responsive to changes in the ecosphere.

Investments, as measured by gross fixed capital formation, GFCF, are anticipated to grow at 9.1 per cent in FY 22, though such investments will be sector-specific and not broad-based. After having over-invested in the previous boom-years that led to building up of excess capacity, followed by tepid demand, core private sector industries like steel, cement, housing and infrastructure have taken years to deleverage, and are consequently pursuing a more measured approach towards re-leveraging and capex expansion. Though large corporates are sitting on cash reserves of around $1.5 trillion, increased cash flows do not always translate into higher capex investments.

The government is betting big on revenue buoyancy as seen through better realisations in GST, a wider compliance-base of taxpayers, as also on disinvestment through the strategic sale of 22 public sector enterprises. The expansion in taxes will allow the government to prioritise growth-enhancing capital spending which will crowd in private investments. The other big source of revenue is turning out to be the leasing out to the private sector of existing, and consequently de-risked, brownfield projects in roads, ports, railways, mining and telecom through the National Monetisation Pipeline (NMP).

Though the global GDP is projected to rebound to 5.6 per cent this year, the risks that could dent momentum cannot be discounted. These risks stem from pandemic-triggered mobility curbs that will hit the contact-sensitive services sector; subsequent labour shortages; intermittent closures that will lead to MSMEs incurring further debt; rising input costs; rising energy and fuel costs, leading to domestic inflation dynamics; and from the rise in interest rates as indicated by the US Federal Reserve, which will increase the cost of doing business.

Hopefully, on February 1, the FM will provision for more budgetary allocations to supercharge the economy instead of reining-in fiscal deficit prematurely to less than the existing 6.8 per cent of GDP. If so, in a post-Covid world order, despite the odds, India could be one of the sweet growth spots.

This column first appeared in the print edition on January 12, 2022 under the title ‘Recovery on the cards’. Dalmia is chairperson for the NCFI, NITI Aayog 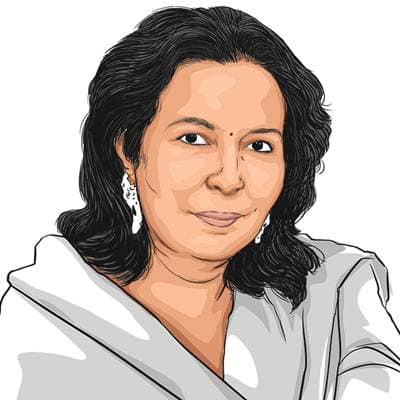