🔴 K S James, U S Mishra write: It helps understand the trends but is not a substitute for a total population enumeration. 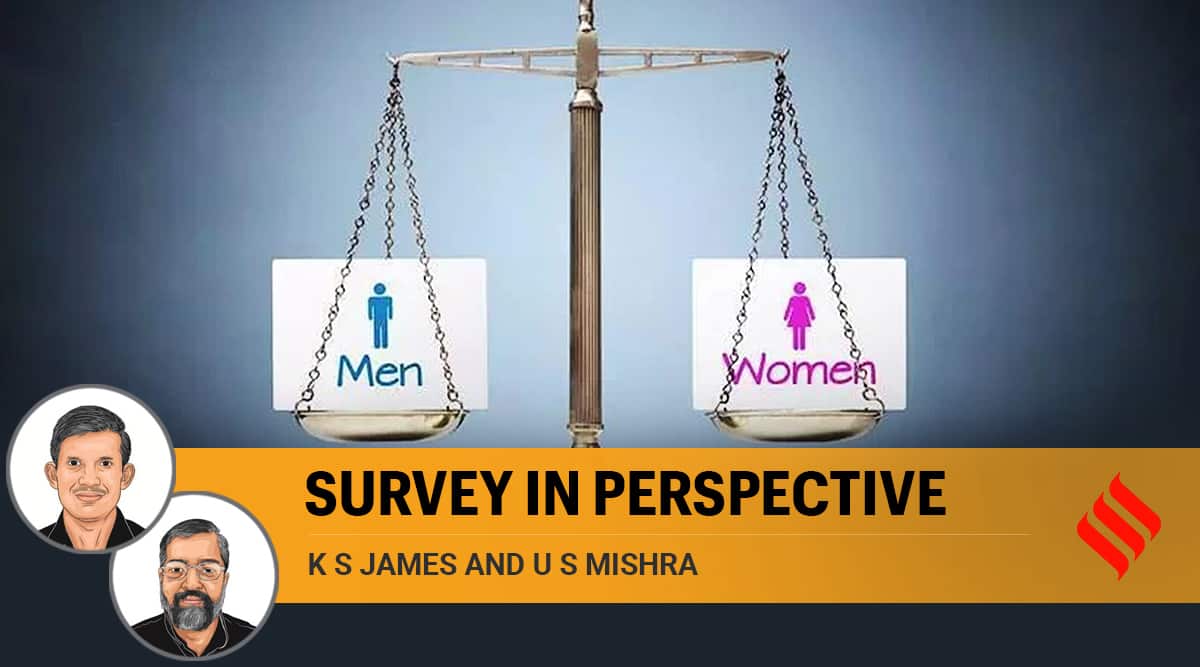 The use of sex ratio trends to make a case for the progress India has made on gender justice and women’s empowerment is not entirely wrong.

The findings of the recently released NFHS-5 on population and health indicators have received extensive attention. The finding that there are 1,020 women for 1,000 men, an improvement over the last round of survey, has led to a wide-ranging conversation. One of the reasons for such extraordinary attention is the absence of Census 2021 to gauge sex ratio trends. The finding, of course, has implications for a range of other issues, especially those related to gender equality — they carry pointers for those wishing to gauge the success of government programmes that aim to remove gender-based discrimination. Some have also questioned the data. It is important to state that the correct interpretation of data has been lacking in both these cases.

At the outset, it is important to remember that an indicator like the sex ratio of a surveyed population can never be a replacement for the population sex ratio obtained in a complete enumeration — the Census, for instance — that includes population beyond the household. Household surveys will not capture the population living in institutions — these have more men than women. The household-based approach of the NFHS might leave out male migrants — though there are possibilities of them getting included in their place of destination if they live in a household. The sex ratio, characteristics, and composition of a surveyed population are often compared to the Census figures to justify the representational aspects of the survey. But, these sets of figures are by no means comparable.

At the same time, trends in the household sex ratio can be compared over a period. Given its huge sample size, perhaps the world’s largest household survey, (over 6,36,699 households), the NFHS has better reliability than any other national survey. The NFHS-5 results indicate an improvement over the last four years from 991 women in 2015-16 to 1,020 women in 2019-21 for every 1,000 men. This is also indicative of the fact that the life expectancy of women has improved considerably over the period in India. According to the latest data, for 2014-18, women live 2.5 years more than men. Nationally representative household surveys like the second round of the Indian Human Development Survey (IHDS) shows a similar trend — 1,004 women for 1,000 men in 2011-12, an improvement over the first round. IHDS sample size, though, is 7 per cent of that of the NFHS.

Thus, the use of sex ratio trends to make a case for the progress India has made on gender justice and women’s empowerment is not entirely wrong. While this ratio may not be a sole indicator of gender balance, there can be no denying the fact that the gender divide in many areas has narrowed. That women’s share in population is getting balanced also owes to the reduced sex differential in early age mortality, and progress in several women-centric indicators captured in the survey. Importantly, reading the sex ratio of a population scientifically goes beyond an aggregate analysis but also involves understanding age-specific patterns that convey gender imbalance at the ground level.

Considering the overwhelming anxiety over the reported sex ratio of a surveyed population, it is pertinent to clarify the limitation of generalisations, and caution against drawing firm conclusions while also showing how these surveys help understand certain trends. First, a population sex ratio based on a surveyed population may not always be a replacement for the sex ratio obtained in a complete enumeration. Second, the progress in sex ratio as evidenced by the comparison between the last and the latest round of NFHS clearly conveys the improving sex ratio situation in the country. The design of the NFHS, explicated in all final reports that are in the public domain, clearly indicates its representativeness. There is no reason for any misgiving on the ability of NFHS to provide household representativeness. Third, the systematic progress in sex ratio is a welcome trend despite the limitation of generalisation. While a balanced sex ratio is ideal, this may not ipso facto imply the wide range of conclusions that have become part of the discourse on the reported sex ratio. In fact, a favourable sex ratio was reported for a few of the states in NFHS 4 as well which was also not in keeping with the gender-based developmental indicators. Finally, though it is perhaps premature to confirm a balanced sex ratio in India, the NFHS results do indicate progress towards that end.

This column first appeared in the print edition on December 20, 2021 under the title ‘Survey in perspective’. James is director and senior professor, International Institute for Population Sciences (IIPS), Mumbai, and the principal investigator for NFHS-5; Mishra is professor, IIPS.