Prachanda stepping in to take charge of the peace process does not inject any fresh hope. 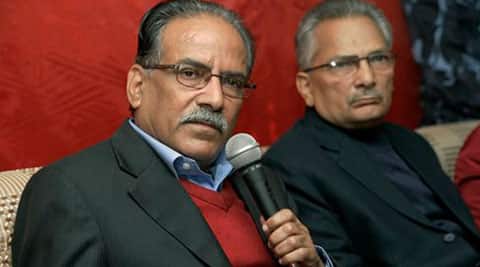 The fast-changing political equation doesn’t seem to threaten Koirala alone, who came to power promising he would quit once the first draft of the constitution was ready on January 22.

Maoist chief Prachanda swallowed his pride when he gave up his earlier claim to permanent leadership of the High Level Political Committee (HLPC), accepting that its stewardship would be transferred to other parties on rotation. But even in retreat, he inflicted a blow on the leadership of the governing coalition — the Nepali Congress (NC) and the Communist Party of Nepal-Unified Marxist Leninist (CPN- UML) — by securing major concessions, like the transfer of public property under the possession of Maoist cadres since the insurgency to their names. As per the five-point agreement signed between the chiefs of the three parties — the NC, UML and the Unified Communist Party of Nepal-Maoist (UCPN-M) — last Wednesday, the state will also pay two lakh rupees in “compensation” to the families of Maoists and pro-Madhes activists killed or wounded.

The NC and UML had to concede to these demands, as the UCPN-M and its allies had not only disrupted parliamentary proceedings for two months, delaying the passage of the budget, but also threatened to go on a nationwide “struggle” demanding ethnicity- or identity-based federalism. But the agreement is only one more among many such deals that have seen poor implementation since April 2006. Eight years down the line, political parties have not succeeded in defining the model of federalism and governance, or of the electoral system and judiciary. Nor have they been able to define the relationship between religion and the state. Prachanda secured the post of the HLPC chief just when his party colleague and former prime minister, Baburam Bhattarai, in his capacity as the chairman of the Political Dialogue and Consensus Committee, failed to bring the parties together on the contentious issue of the constitution.

However, Prachanda stepping in to take charge of the peace process, which is linked to constitution-writing, does not inject any fresh hope. There are serious threats that may come in the way of forging a consensus. The Rastriya Prajatantra Party- Nepal (RPP-N), the fourth- largest in the House, has threatened to obstruct proceedings over not being included in the HLPC. But its agenda got a shot in the arm as 32 prominent NC leaders asked their party chief and PM, Sushil Koirala, to ensure that Nepal is declared a Hindu state. In their assessment, Nepal’s shift to secularism — listed as a major achievement by the Maoist, NC and UML leaderships — was dictated more by external forces.

Bhattarai, more than others, perhaps saw the use of gradually channelling people’s frustration through what the Maoists earlier called “reactionary and regressive” politics, with the slogan, “With secularism, federalism and republicanism achieved, it is time to go for an economic revolution.” But he appears to have been overtaken.

The fast-changing political equation doesn’t seem to threaten Koirala alone, who came to power promising he would quit once the first draft of the constitution was ready on January 22. It also threatens the top leaders of the NC, UML, UCPN-M and the Madhesi groups, who acted freely in the name of constitution-writing with full support from the international community but with no accountability. Now, the radical changes they had introduced are under threat.